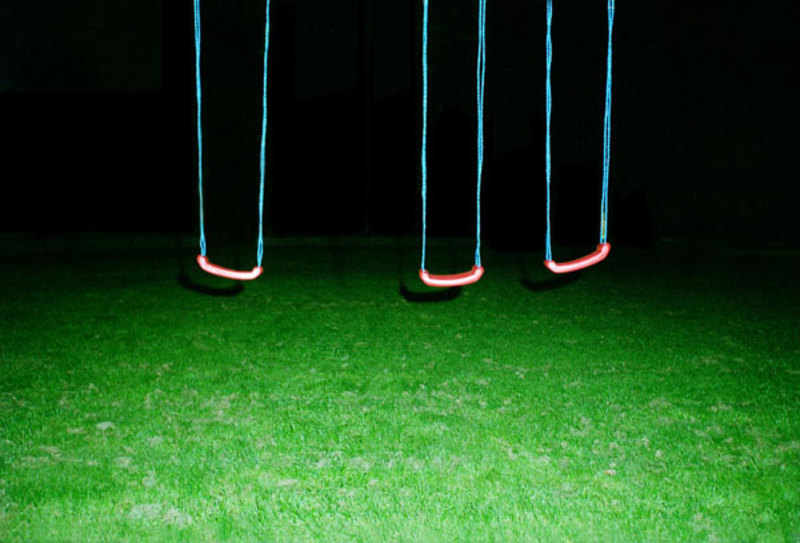 The Deliberate Choice of Nothingness

I wish I could take these home with me. As contradictory as it may seem, a room filled with a family of such an aesthetic possession might be its own cure. The actual collection of texts and photographs, “Short Stories of the Transparent Mind,” by Stockholm-based artist Joakim Eneroth is larger than what is presented in the gallery, but one is still able to discern that notions of absence and emptiness are seriously and creatively approached.  This emerges as an attempt to remind one of the importance of a well-honed spirituality and the ongoing cultivation of the self, despite forces pulling and shoving from all directions.

Devoid of the clutter of daily life, prying, pushy visages are distanced from the lens or turned away in a gesture highlighting remoteness or even a lack of recognition. Eneroth shares the off-kilter, often portraying wide open spaces, architecturally queer offshoots or darkened fields which can only be seen with the assistance of a high-powered flash or particular light accessory.

Individuals are often nude, flaccid, perhaps meant to mirror our own vulnerabilities. The passage of time is an important facet, and this is indicated by the changing view seen through a lonesome panel of windows. Emphasis is also placed on notion of the pause; Eneroth utilizes angles and masters the positioning of one object in relation to another, and time is frozen during moments which often go unseen.

Spaces otherwise interpreted as barren landscapes or individuals which seem unapproachable or even consumed with something otherworldly are given room for re-examination. Eneroth suggests an alternative method of living, perhaps, derived from an appreciation of the void. Is one's mental goal of attaining transparency synonymous with transcendence? And if so, does an individual's perception of transcendence apply to others—if at all?

Bill Viola speaks of Joakim Eneroth's work: “Eneroth’s spiritual practice, and his camera’s trained inner eye, allows him to peel back the layers of the self and the external surfaces that obstruct our inner vision ... Eneroth has said that his goal is to reach the point when 'the story line fades away' and we arrive at 'a moment of being no one going nowhere.' ” Being part of an era where every iota of one's private life can become public at any given moment and with little regard for an individual's sense of safe space, perhaps, going nowhere is a relief to many—the deliberate choice of nothingness, rather than the exhaustive overload of somethingness, of everythingness.

Posted by Jacquelyn Davis on 1/18/11
RELATED ARTICLES
COMMENTS (0)
ArtSlant has shutdown. The website is currently running in a view-only mode to allow archiving of the content.