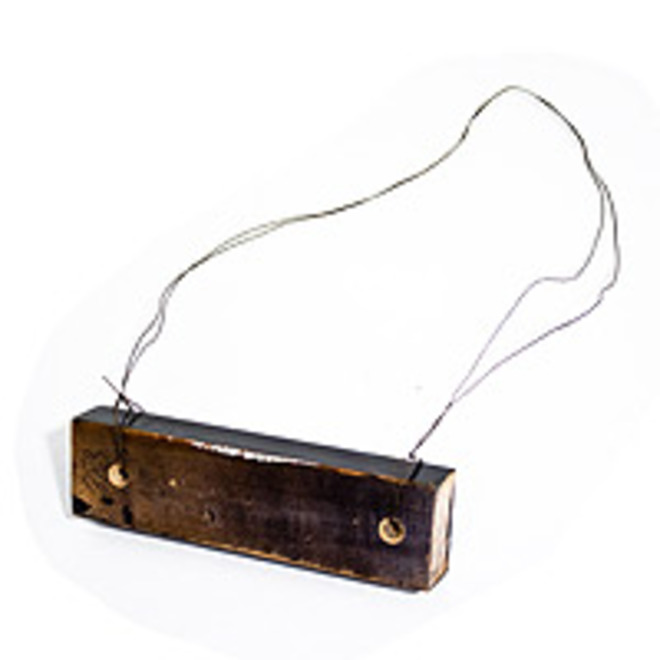 Works which are strictly labeled as either ‘design’ or ‘craft’ should not be segregated from the realm of contemporary art. Despite the trend to quickly locate and categorize one’s practice, creators actually exist in a melting pot which often stems from a shared goal, concern or historical influence. Academics argue that boundaries between spheres of practice are, in essence, blurred—that each ‘context’ has become a moving target. The exhibition “Aeon Profit—Piano Forte” appears to be influenced by Oulipian constraint-based practice—one which has moulded the works of many, such as writers Italo Calvino and Georges Perec, as well as performance artists Vito Acconci and Janet Cardiff.

Stockholm should be pleasantly surprised when the innovative jewelry design collective A5 shows its face in the central gallery of Platina (a self-subtitled “Gallery, Shop and Studio of Contemporary Jewelry”) located below the shop’s front. A5 consists of three designers—Konstfack graduates, each possessing their own set of individual goals. Yet oftentimes, their singular ambitions coincide with the others in their self-constructed collective. Designers Romina Fuentes, Adam Grinovich and Annika Pettersson harbor a cosmopolitan flavor, and they share an interest in large-scale collaborations with those from varying histories, honing complimentary skills. This group remains vigorous by combining their international perspectives with a desire to engage with the overlap between mind and body, in hopes of expressing that “the[ir] whole is more than the sum of [their] parts” (Aristotle).

The origin of their name has nothing to do with paper size; rather, they see themselves as an emerging presence of creative cells, more commonly associated with the biochemical regulatory sequence of the same name (which has something vaguely to do with insulin for those uninitiated into the jargon of biochemistry). A5 has established itself as a responsive research tool for those both involved with and influenced by their protean practice. One of their goals is “to work collectively with as many individuals and groups from as many different backgrounds as possible. Collaborations are a main focus, even visible in the [A5] name, leaving the equation open to be completed by some outside element.”

In their installation “Aeon Profit—Piano Forte,” A5 flirts with found, discovered materials, an attempt by the collective to emphasize that merited art, craft and design can stem from openly available materials drawn from our immediate environs—a quiet declaration from A5 that art doesn't need to be flown or shipped in from a distant location to warrant intrinsic value. The world is moving towards a smarter sustainability; this collective attempts to extract beauty from recycled materials.

Finding similarities between musical instruments and jewelry, A5 finds that both are often preserved and held close to the heart—even when damaged, broken or seen as less deserving because of some acquired flaw. A5 manipulates the remainder of a damaged piano, turning this classic instrument into 145 kilograms of hand-crafted jewelry, each piece a powerful token and phantom of the piano as it once existed. Pieces range in size and texture, sometimes highlighting the piano's previously fine-tuned inner workings. At other times, objects appear as coarse, heavy and raw—confident in their awkwardness.

In creating a parallel between this instrument and the forms and functions of jewelry, sometimes to be worn or at other times to be displayed simply as adornment, A5 questions the piano's sentimentality in both its original, intended form and the multiple forms that the piano currently occupies. Questions arise: can this object's inherited sentimentality remain intact as its form changes, or has the piano's longstanding bout with romanticism been dissolved by the fact that it now exists as separate, detached pieces? In losing its intended function and adopting a new series of forms, the piano's original relationship with and to the body is no longer static. Similar to how one might sacrifice parts of one's self for the sake of improvement, this piano has resigned from its role as musical instrument so as to radically serve its wearer.

Posted by Jacquelyn Davis on 10/19/10
RELATED ARTICLES
COMMENTS (0)
ArtSlant has shutdown. The website is currently running in a view-only mode to allow archiving of the content.