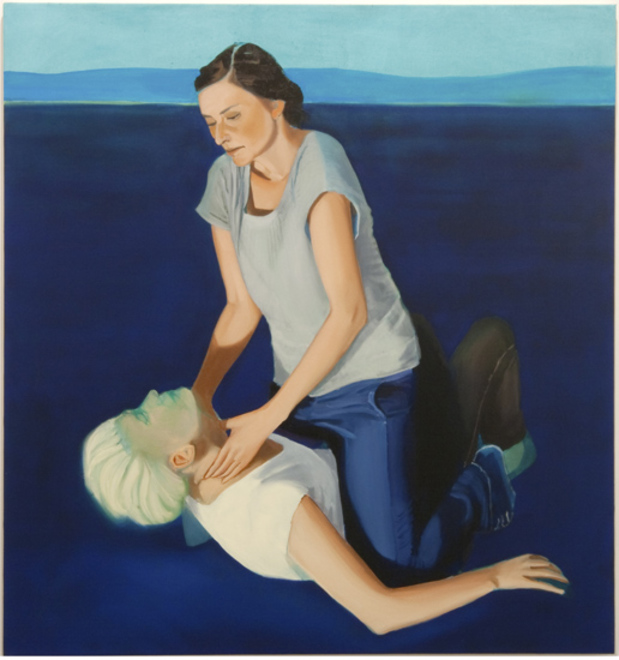 Sara-Vide Ericson's first solo exhibition “Liar” at Galleri Magnus Karlsson evokes charged emotions. She paints like a moderately macabre Alex Katz with all the icy clarity of a Northern European. Her crisp paintings illuminate post-modern portraits, figures bent awkwardly into compromising positions—whether confined by their own solitude or in an incomprehensible power struggle with another. The bright, cool light in the paintings belies what remains unrevealed, as it seems impossible to pinpoint the relationships between figures. Yet, one senses that these rapports are either familial or sexual—always intimate and paradoxical.

Many of these figures seem emasculated, victimized or (in stark contrast) blatantly empowered. Ericson does not allow the viewer see the details of all faces, and figures are often nude from the waist down, partially concealed. Sometimes, individuals are positioned on their knees, reminiscent of circulating media imagery eluding to distant preludes of politically fueled torture and abuse. In many cases, heads are tilted slightly upward to the sky, as if in prayer or meditation or even as a fatalistic gesture of desperation or hope. Ericson's figures are often in the midst of a specific stretch or pose.

In Liar VIII, 2010, a pale dark-haired woman appears to be wringing the neck of a man who is possibly a threat to her, or this could be a fetishistic, heterosexual encounter. The pleasure-pain continuum should be observed; the division between ecstasy and pain is not always a lucid one. The neck and throat contain one of the five ruling chakras controlling speech, voice and individual will. The painting's background is a sea of blue, shades of an abyss—this color also represents the throat chakra. The inability to pursue truth through self-expression and knowledge-building may be unconsciously represented by this act of strangulation.

It is Ericson's talent for balancing on this tightrope between these two polar spheres that gives this solo exhibition its formidable weight. The woman in Liar VIII, 2010 is in a position of power, straddling a passive man who lies beneath her, his face painted ghostly green emphasizing a lack of circulation, or perhaps jouissance. Both figures are clad in fitted jeans and neutral-toned tees; they could easily be re-appropriated models from an American Apparel advertisement. Homicidal scene or sadistic tease—there is no way to know; it is the viewer's forced speculation of this woman's intention which marks her as both appealing and tyrannical. The woman's wholesome face is focused on the man's; she appears determined to accomplish whatever feat she has in mind.

Is Ericson attempting to introduce an unpredictable form of erotic art, or is she interested in unmasking the assumed relationships between men and women, women and women, and otherwise? If determining or any kind of sexual truth is a matter of direct experience through practice (from pleasure itself), then what type of experience is gained from viewing a painting of an encounter that seems ambivalently sexualized? Is it possible to gauge and thereby rank the potency of an experience as either firsthand, secondhand or tertiary? So many of Ericson's figures are on their knees; a parallel between sex and religion cannot be ignored, when considering this half-stance as a shared gesture of sacrifice, resignation and devotion. Foucault argued that in the past, Western society defined sexuality as being by nature. If this is still the case, then Ericson may be signifying the complexity of nature by shedding light on uncomfortable aspects of the interpersonal.

Posted by Jacquelyn Davis on 10/18/10
RELATED ARTICLES
COMMENTS (0)
ArtSlant has shutdown. The website is currently running in a view-only mode to allow archiving of the content.