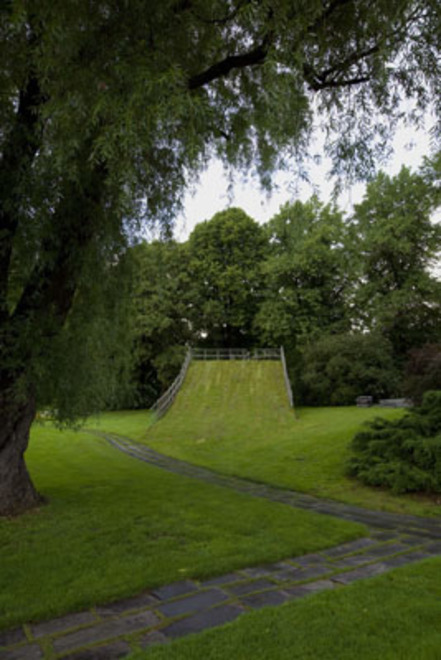 The parks that surround some museums isolate art into objects of formal delectation. Objects in a park suggest static repose rather than any ongoing dialectic. Parks are finished landscapes for finished art.

Sweden, the land of near perfect summers, lush outdoor environments and carefree activities. The tourist bureau is, rare for tourist bureaus, not lying. Marabouparken's group exhibition “Parkliv” (“Park Life”) took advantage of the generous expanse that surrounds its Stockholm-suburban art space, sharing a diverse collection of works displayed both inside the gallery and spread among their impressive garden.

This exhibition served as an inaugural gesture, introducing Sundbyberg's new art center to its local residents, its name originating from the fact that this park was initially created as a recreational opportunity for those employed by Marabou's old cocoa laboratory in the mid-twentieth century. Complimenting the “Parkliv” exhibition which displayed works of Martin Boyce, Nathan Coley, Matts Leiderstam and Elisabeth Westerlund (to name a few), an additional tribute exhibition displayed a selection of Hilding Linnqvist's Modernist paintings.

Park spaces have a history of possessing key significance; there have been ongoing inquiries and observations as to who a park should be meant for, versus who really ends up using the park. As well as Smithson's copious observations on parks, which ultimately come down to how humans choose to organize and interact with nature, art's relationship to nature has been somewhat fraught, the sculpture park largely going out of style in recent years as a bourgeois formality (not to mention near impossible municipal red tape).

But rather than impose their will to order, the artists in "Parkliv" find the subtle gaps and exchanges between people and nature through parks. Kohei Yoshiyuki shares his Untitled (from the series The Park), 1971-79—a series of eight photographs documenting an erotic undercurrent of human sexuality present in Tokyo public parks during the seventies. The fact that these actions were documented in a nocturnal setting sheds light onto any voyeuristic activity as a possible faux-pas, when considering what Japanese society deemed to be acceptable, outward behavior. Queer sexual hints and coy implications geared towards satisfying the libido are displayed in Yoshiyuki's series.

The Italian artist Paola Pivi shares an outdoor piece Untitled (Slope), 2010 (first done in 2005) which is an oversized grass sculpture slanted at a prominent angle, serving as an odd jigsaw piece or spatial game for those who find themselves inside the garden. This gesture of physically elevating the lawn into the air introduces the question of slight reform or even radicalism. It is easy and not so remarkable to simply be a blade of grass on a comfortable lawn—flat, green and dependable in its functionality. Pivi provides the viewer with the option to roll down an inviting yet synthetic slope of rebellious blades, connecting feelings derived from the forces of gravity with novelty. Perhaps, another sentiment is relayed: that a park has no obligation to visually stand according to any number of previously founded definitions. This space and its vibrant components should strive to be playful and malleable, above all else, to ensure a fruitful livelihood.

Posted by Jacquelyn Davis on 9/13/10
RELATED ARTICLES
COMMENTS (0)
ArtSlant has shutdown. The website is currently running in a view-only mode to allow archiving of the content.