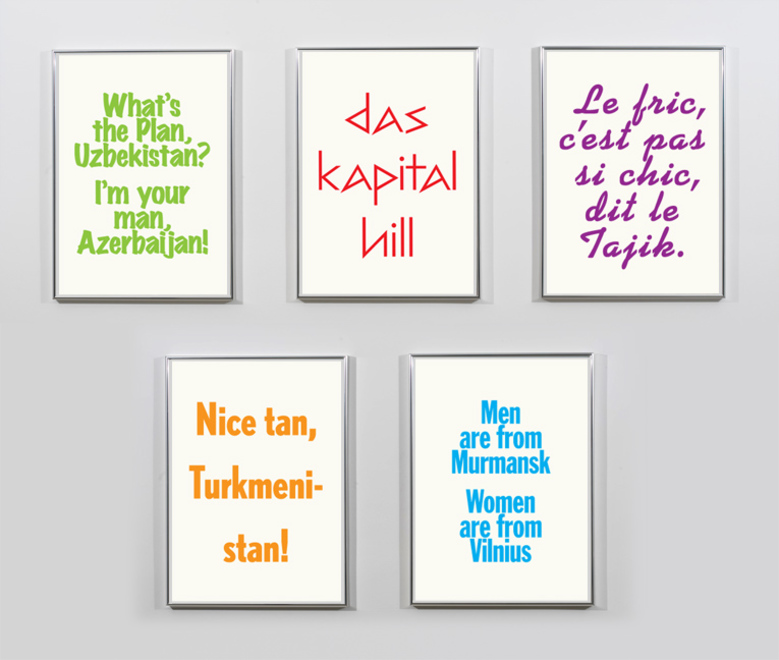 Interview with Slavs and Tatars

The first time I talked with Slavs and Tatars was by Skype, then I met them again (or perhaps for the first time depending on how you count these things) after a performance/lecture (79.89.09) they'd given at the Swedish  Embassy in Berlin. Since our first meeting, we have engaged in several discussions and exchanges. The following informal discussion took place over e-mail. It represents only a small window on Slavs and Tatars's  vast field of interests.

Federica Bueti: As you state on your website: "Slavs and Tatars is  a faction of polemics and intimacies devoted to an area east of the former Berlin Wall and west of the Great Wall of China known as Eurasia." Could you talk to me a bit more about the origins of your collaboration? When and where you decide to start to the project?

Love Me, Love Me Not: Changed Names, Wall application, for "The Past is a Foreign Country," Center for Contemporary Art, Torun, Poland. 2010,

Slavs and Tatars: We founded Slavs and Tatars in 2006 for equally intellectual and intimate reasons. Of course, we are interested in researching an area of the world–Eurasia–we consider relevant, politically, culturally, spiritually. But it is also the result of the end of a “western promise” to some degree in our respective lives: after having lived in the major metropolises of the West (London, NY, Paris), studied in some of the finest institutions, worked with leading companies, etc. we feel there is something missing.

FB: What do you mean with "something is missing"could you explain...

ST: We take issue with various ideas: the positivism that seems to be so rampant in the West; the pragmatic nature of knowledge versus initiative; the experiential nature of wisdom; the idolization of youth coupled with the dismissal of age; an excessive emphasis on the rational at the expense of the mystical; the segregation of children from adults at social functions; splitting dinner bills; disproportionate attention to the individual over the collective…

FB: There are two points in your statement which I would like to discuss: One is the transmedial approach-—you have produced posters, objects, books, t-shirts, lectures—your practice is, in its way, extremely pop. The popular media appropiation seems a way you get closer to the audience. Could you explain your idea of artistic intervention and the position you take in the visual field?

ST: Our work across different media stems from two things: first, a notion of indistinguishability: in a period suffering from a tyranny of transparency as is ours, it is important to be there where you are not expected. Working across several media also allows a polyphonic voice: we do not want our work to be only of relevance to a specific industry, whether the art world or academia. The second is a matter of access: we are not precious and would like our work to be accessible to a large group as possible.

FB: The second point is the need for revisiting and discussing history.  What does discussing Eastern History means today that we are facing the decline of an unitarian and true Western Civilization?

ST: We are interested particularly in redeeming, preserving, sharing and revising certain areas of Eurasia’s history because we feel it is of particular relevance to larger issues facing the West today: if, for example, we are to believe there is somehow a clash between the East and West or between Islam and the West, then it makes sense to look at perhaps the only area in the world where these have co-habited successfully.

Meanwhile, certain traditions and heritage are at risk of being dismissed in the region’s efforts at modernization. Too often, across Eastern Europe, the Caucasus, and Central Asia, modernization is equated with westernization, to disastrous effects and ironically at the very moment as you mention that this Western narrative is in doubt and decline.

ГОРЫ ОT УМА
Горе от Ума (Gore ot Uma) is a famous 19th-century play about Moscow manners by Aleksander Griboyedov, a close friend of Pushkin’s and diplomat to the Czar in the Caucasus. The play is translated in English as WOE FROM WIT or THE MISFORTUNE OF BEING INTELLIGENT. By changing the Е in the original Russian title to an Ы,the title becomes MOUNTAINS OF WIT and the urban premise of the original work is hijacked by an imaginative Caucasian setting, one which played an influential role in Griboyedov’s life and death.
"Ruins of Our Times," Ministry of Transport, Tbilisi, Georgia, 2010
Wall painting, 180 x 200  cm.

FB: Could you give us a precise definition for your terms "Westoxification" or "Occidentosis"?

ST: The term Qarbzahdegi, translated as Westoxification or Occidentosis, was first popularized as the title of a 1962 polemical booklet by Jalal al-e Ahmad, a social critic in Iran. Westoxification was used to describe the condition of secular Iranians who passively subscribed to Western values and did not sufficiently rely on their own cultural and religious heritage. Our work confronts a similar condition in the post-Soviet sphere where countries, in an effort to modernize, are subscribing wholesale to Westernization.

FB: What  is your personal approach to archivial materials?

ST: We are particularly interested in the wild swings of information that archival material offers, from the macro voice of statist propaganda to the intimate whisper of the samizdat. There are different degrees of abuse, if you will, to which we subject this material. On the gentler end is transliteration, a fat ugly cousin to translation, but no less important given that much of the research we do is in a non-Latin script, whether Cyrillic, Arabic, Georgian or Armenian. Then there's translation, simply making the material accessible to a global audience, as we are doing with Molla Nasreddin, an early twentieth century Azeri satirical periodical we are publishing later this year with JRP/Christoph Keller. Finally, we also revise and play with certain texts in a rather performative way as in our wall applications Mountains of Wit or Chven Gaumardjos Sakartvelos: the idea of repetition and historical continuity are crucial to the decision to work on an existing text as opposed to composing one ourselves. It's equal parts celebration and critique.

FB: Often you use graphic design in your practice. . . how do you envision and place the design in field of cultural production?

ST: Given the important role of discourse in our work, we work with design as an effective means of distributing content. We are not as interested in graphic design formally as we are in its potential. As we mentioned with humor or the use of pop, graphic design is simply one amongst many tools we can use

ST: In some ways, yes. It does allow for an openness not found in other disciplines today. Take for example our writing—at once analytic, poetic, polemic–it doesn't sit entirely within journalism, fiction, or academia but rather across these. Art definitely espouses these interstitial spaces. The danger, though, is that one becomes satisfied with occupying margins and never confronts the beast, so to speak.  Art's intensive energy of late should not dupe one into believing it is a widely accessible or relevant world.

FB: I'm interested in infiltration as a strategy for producing and distributing ideas. What does infiltration means in your practice?

ST: Infiltration means for us using your enemies language, for example pop. We are acutely aware the use of pop is a tool to help share our enthusiasm and interest in areas which otherwise remain obscure to large sections of the globe. Infiltration is also another way of questioning linear, positivist and rational approaches to knowledge.

FB: Is the crossing of boundaries between different disciplines only a potentiality or is it also a limit?

ST: It is both interestingly enough. The very indistinguishability mentioned above of course has its limits. We often feel that we are not doing individual projects or pieces but rather installments in one larger project that is Slavs and Tatars itself. We don’t mean this in an insular, reflective naval-gazing way but by bleeding or blurring disciplines, each project becomes a platform, nodal point or trampoline for another and is informed by what follows and precedes its. So it almost becomes impossible to reduce the work to a sound byte. 79.89.09 is a perfect example of this: at once a lecture, an edition, a mirror piece, and an intervention in a magazine. But it is almost impossible to discuss one part—say the role of mirror mosaics—without discussing the Iranian revolution of 1979, the Russian revolution of 1917, the visual or folkloric language that accompanies revolutionary ideology etc.

FB: Let's imagine a big cultural revolution. Which weapon do you find most effective?

ST: We believe most in speaking and the physical presence that accompanies it. If we look at knowledge vis-à-vis wisdom, the former is practical, it can be distributed, ordered online etc. Wisdom, however, has a necessary experiential, affective component and we are committed to restoring the importance of presence, via conversation, education, or an event. It would be preposterous for us to be against the digital or virtual: rather we simply believe presence becomes all the more urgent in the current climate.

FB: "Self-management body-your fate in your hands," Prague 1989. Is that motto still fundamental for your practice today? Could be this your real statement?

ST: We do believe in the idea of self-determination but at the same time in a resolute defeatism. It's probably a more Slavic defeatism than a Middle Eastern one: that is, we know we will fail but we'll try our hardest nonetheless.

All images courtesy Slavs and Tatars

Posted by Federica Bueti on 8/17/10
RELATED ARTICLES
COMMENTS (1)
translation
I would like to add it is always very hard to translate from one language to another language. I am Latvian but at school I had to study three languages - Latvian, German and Russian. Five years ago I moved to England and began to study English (be pitty to me, I am 59...) In my opinion Russian word *ym* means smart thinking or wise brain, because in this language is another word too *pazym* - common sense. How can I write *gore* in russian transcription? OK does not matter, but it means big sadness. So this saying means - big sadness of thinking process and it is used than a big irony... You changed this saying to MOUNTAINS OF WIT. That is great - XXX from me!!! With love AINA
Comment by: hyena on Thursday 08/19/10 at 5:16 AM
ArtSlant has shutdown. The website is currently running in a view-only mode to allow archiving of the content.