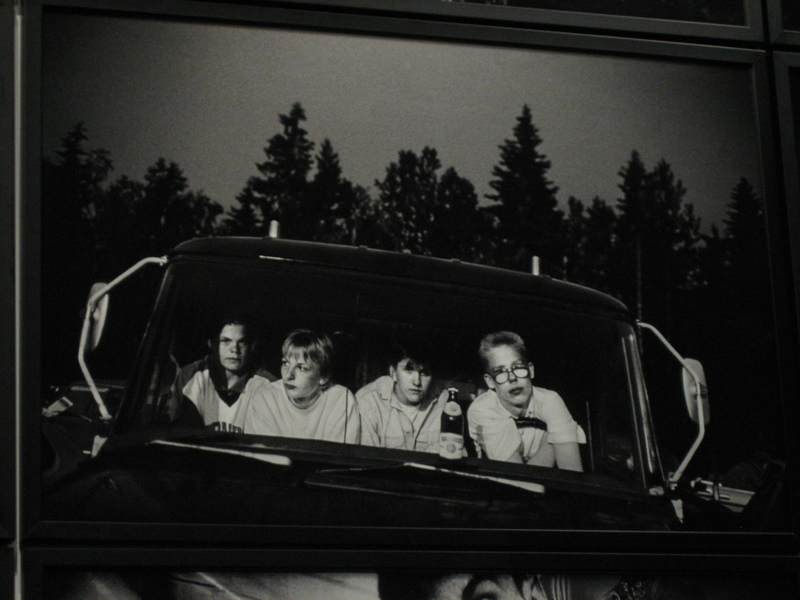 Well-known Swedish photographer Anders Petersen has been taking photographs since he left home at eighteen, beginning in Hamburg, Germany in the '60s with outsider figures and acquaintances at a bar called Café Lehmitz, leading up to his latest show at Stockholm's Fotografiska Museet displaying a fine-tuned collection of 100 black and white photographs taken in Värmland, Sweden. With so many photographs displayed side by side, it is easy to overlook some, focusing more on others that more permanently find their way into the viewer's domain of interest.

Petersen prefers taking black and white photographs, and he works well by following site-specific constraints for his series; Petersen's series are often simply named after the location where the photographs were taken (e.g. Utrecht, Okinawa, Rome). Yet, this later exhibition From Back Home is not so much about Värmland but more about Petersen's decision to document this town years after living there himself as a teen. Most images include individuals that he does not know and from a recent mismatched decade that does not directly reflect his actual set of memories, yet they serve to question and confirm his roots nonetheless. Questions such as these arise: how much actually changes over time regarding notions of homeland or hometown? Is memory more entangled with the visual snapshot of a specific memory, or the feelings derived from loved ones and familiar scenes complimenting those memories?

Much like cherishing each personal remembrance, it is also helpful to focus on just one of Petersen's photographs at a time. Above is one image to consider more closely that was displayed in Fotografiska's From Back Home series. Four younger men with no perceivable parental supervision —or perhaps eager, young boys on the verge of manhood is a more accurate portrayal—are perched in the cab of an older pickup truck that may or may not belong to one of these unmoving passengers. For how old are these awkward boys, their baby faces and glasses emphasizing unfinished imperfection? Old enough to drive? Do they have the keys and kroner for petrol? Maybe. Yet, driving in Sweden is a privilege more strictly reserved for those who can afford it, and four young men sequestered in a small town may be at a loss.

It is hard to discern the time of day, yet the grey sky and lush pine and fir trees in the background make one believe that it could be a summer's dusk. Three of them are gazing towards the viewer, but one is turned to his right in a seemingly absent-minded yet nonconformist gesture. All are, more or less, dressed in casual, uncomplicated attire, which makes one think that they are of a similar class and mindset. Regarding race and sex, they also reflect one another which questions their heritage: four young white men who are perhaps part of their own self-created brotherhood or boy's club. Does this image encompass a pre- or post- right-of-passage or initiation ritual? Is this image encapsulating the moment before they 'go out on the town,' or are they still too young to go out, left to sneaky unchaperoned maneuvers? Are they brothers, friends, winners, losers or keepers?

There is a lone bottle of alcohol propped on the dashboard; it is unclear who owns it. Perhaps, this bottle has no owner; either way, questions of one's individualism versus a collective mentality become issues by choosing to display this very simple object—one notorious tool of many that may either unite or separate them in this moment. Are these young men one-for-all, all-for-one, and if so: for how long?

One face, which could very well symbolize Petersen's, looks far away, already longing for elsewhere.

Anders Petersen, From Back Home, 2008. Courtesy the artist.

Posted by Jacquelyn Davis on 8/9/10
RELATED ARTICLES
COMMENTS (0)
ArtSlant has shutdown. The website is currently running in a view-only mode to allow archiving of the content.