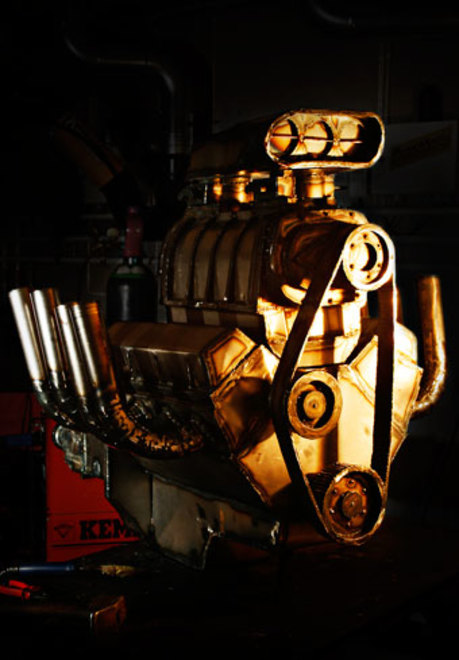 In Sweden—where public transportation is quite sufficient and considered to be superior to competing modes of mobility—it is an oddly welcome change of pace to see one's creative focus shift towards the automobile culture. Swedish artist Daniel Andersson recently presented Big Block Beauty, 2009 alongside the work of twelve other artists in “Bilen i våra hjärtan” (i.e. “The Car in Our Hearts”) at Skövde Kulturhus. Situated in the heartland of Sweden, works in this group show expressed nostalgia towards what the car once was, appreciation for the its power and speed, as well as evaluate the environmental impact that these machines have on today's volatile era.

Whether or not Sweden's automobile culture is thriving is a matter of perspective. In most cases, there is a division between the recreational interests of those residing in smaller towns and rural countrysides and those stationed in more concentrated city centers. This difference is somewhat due to resources being either plentiful or lacking in a specific region. Yet, an appreciation for beautiful machines, ranging from the modern Volvo to classic automobiles and their overhauled inner workings, appeal to many admitting to a wide range of backgrounds—not just limited to the working class. Mastering and preserving the automobile, whether it be behind the wheel or under the hood, appears to be a hard-earned skill for those who value authenticity.

Andersson's Big Block Beauty, 2009 is an elevated eight-cylinder engine, bright red-orange, demanding, cocksure in demeanor. What is this charged, fiery object attempting to express? Reminded of J. G. Ballard's cult classic Crash (1973), the automobile becomes the device in which one receives pleasure repeatedly, specifically by the protagonist (named after the author himself) suffering from symphorophilia. If the automobile in its entirety is capable of unleashing sensual gratification, what is an expected reaction to an automobile's singular part—in this case, its motor? Overtly phallic in design, Big Block Beauty, 2009 inherently flirts with a fetishistic alternative, despite the object's depleted capacity. No longer able to function as the "heart" of its vessel, this beauty still manages seduce—similar to how an enchanting siren still besets a naïve victim, despite rumors of danger.

Posted by Jacquelyn Davis on 6/14/10
RELATED ARTICLES
COMMENTS (0)
ArtSlant has shutdown. The website is currently running in a view-only mode to allow archiving of the content.