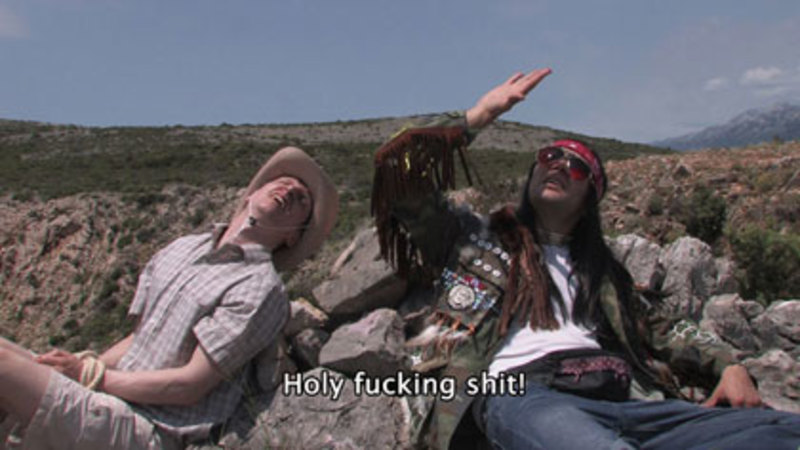 Every spring at Bonniers Konsthall, an effort is made to share the work of emerging Swedish artists  that are considered to be cutting-edge, contemporary, and altogether de rigueur. The curators this round tried a different spin; they chose to focus on the works of eleven Swedish artists who now make work and reside outside Sweden—in other words, expatriates who have chosen to produce work under the influence of other cultures. Which begs the question: what makes these artists Swedish anyway? (...even though nationality as an aesthetic construct has long passed out of vogue at places such as the Whitney Museum of American Art or at the Venice Biennale where Liam Gillick last represented Germany.) When examined more closely, does an artist possess a right or responsibility to identify with one's origin, considering morphing notions of immigration, homeland and patriotism?

Curator Camilla Larsson—with the assistance of satellite curators Krist Gruijthuijsen, Tone Hansen, Ana-Maria Hadji-Culea, and Josefine Wikström—display the work of eleven artists who are no longer visible within the confines of the Swedish art world, for many of them have made a conscious decision to avoid Swedish institutions, galleries and museums as viable exhibition options. Yet, they present their work via one of these venues after all, adding irony to the concept of highlighting the vanished. For, when does art desist in being invisible? Considering the current technological era, is it possible to hide at all?

Larsson explains the origin of the exhibition title “Runaway Train”:

In 1992, the grunge band Soul Asylum had a hit with Runaway Train. The song is about children and young people who have disappeared. I remember the video being shown round the clock on MTV, and the channel apparently being swamped with calls from people whose relatives appeared in it. Astonishingly, the video actually managed to re-unite broken families. The story is fantastic and bears retelling—to think that culture in these questionable times can actually have unanticipated effects, whether it be giving us a chance to see new aspects of ourselves or something more tangible.

This group show does not focus on one medium; artists were encouraged to present work utilizing a flexible spectrum of formats including: personal collage, film, image archiving and liberated performative techniques. Such observable flexibility reflects Larsson's perspective that “an identity can be created by several individuals, speak with several voices, that it can take on various physical guises, and have multiple origins and shifting visual expressions.” This collection attempts to strengthen a collective voice whilst simultaneously preserving each creation in an overwhelming multitude.

Many works present in “Runaway Train” are eager to be or become something else, yet this desire to transition should not be confused with a preoccupation to negate prevalent Swedish art-making practices. For instance, artist Nina Canell presents two works—Winter Work, 2009, and Perpetual Mobile (25 KG), 2009-2010—that magnify the process of dissolving or changing from one form into another. Malin Lennström-Örtwall's Maybe I'll Never See You Again, 2009, is a half-lit pink neon sign displaying these words in a cursive font—tubes damaged by a dubious journey from Palestine to Norway, leaving the konsthall floor littered with glass shards (and transnational traces of Tracey Emin). This deliberately flawed display reminds the viewer that the self-reflective process of becoming is rarely easy and often raw. One might assert after confronting Jenny Lindblom's Untitled, 2009-2010 that this process brings forth contradictions between what society expects and what a “good citizen” becomes in response to burdensome socio-cultural dictations.

A recurring aspect present in many of these works is the relationship between the artist and new spaces in which they inhabit. Artist Niklas Tafras in Collected Headphone Leakage Monologues from the Victoria Line, 2009-2010 presents a sound sculpture emitting the mechanical drone recorded in the London underground. Tafras seems interested in the dislocating sounds of public spaces—sounds that create a more tangible sensation of being present yet are often muted or ignored. Charlotte Wandt's Lonely Planet Holland 3, 2007-2010, relays Wandt's life in the Netherlands in the form of a guide book, highlighted with her own possessions and video clips. Travel is often an intense and personal experience, sometimes impossible to sufficiently document, yet Wandt attempts to share her remnants in a digestible format. Wandt sold her artwork outside the Stedelijk Museum in order to afford her trip to Sweden for this exhibition; this fact intensifies an angle of art-making that corresponds with the sheer difficulties of creating in the midst of a recession-laced backlash. Wandt's choice to not sell her work in an institution (even in the Netherlands) emphasizes that art-making as a privilege is more often rooted in class than in lineage.

Posted by Jacquelyn Davis on 6/14/10
RELATED ARTICLES
COMMENTS (0)
ArtSlant has shutdown. The website is currently running in a view-only mode to allow archiving of the content.