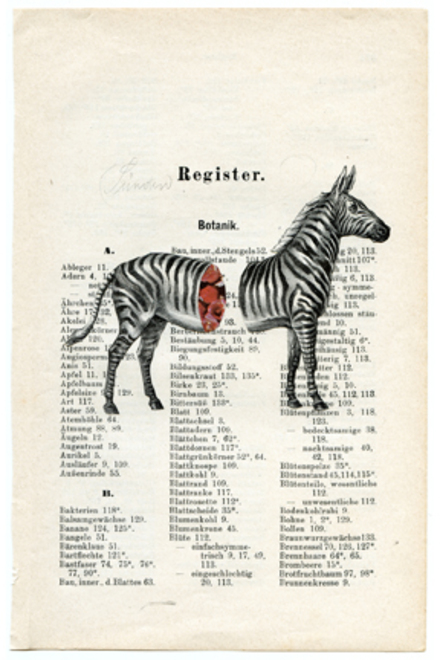 In the past few years, Portland artist Melody Owen has participated in so many artist-in-residency programs that it has become an integrated aspect of her practice: She travels to make work and, in turn, makes work about the travel. Yet her output—sculpture, video, drawings, collage—resists the superficial glance of a rootless tourist. If the imagery we encounter in Letters from Switzerland, made during a 2009 residency in Aarau, Switzerland, is occasionally alien or exotic, it is not presented with the passing interest of a cursory visitor. One senses an anthropological investment in her subjects, as she immerses herself in the cultures of the countries she visits to decipher their most potent symbols and visual signifiers, to adopt a new way of seeing.

For "Letters...," Owen primarily works in collage, altering indigenous source material, from books to print ads. In the Drought in Kenya series, she places black-and-white illustrations of various animals—a zebra, kangaroo, dolphin, etc.—atop indexical pages from a German-language book, emphasizing sections on “Botanik” and “Zoologie.” This connection between flora and fauna is explained as each animal is halved, like a Russian doll, exposing bursts of red and pink flowers where viscera should be. Fascinatingly, the rosy floral hues scan as the pallor of raw meat, delaying the reveal that Owen’s animals are petal-stuffed piñatas.

Importantly, Owen’s use of collage extends an art historical link to the geography she inhabited during the residency, nodding to Dada’s origins in the dark, liquory confines of the Caberet Voltaire in Zurich. The best work in Letters—a series of collages titled The New Universe, 2009—show the artist working in a convincingly Dadaist mode, trusting her instincts to lead her places calculation couldn’t. Each piece in the series focuses on a single color and consists of images from disparate visual lexicons: animal skulls, trains and ocean liners, glittering jewels, and arcane technical and anatomical illustrations. By consistently employing the same types of images, the series begins to feel like a deck of playing cards being shuffled over and over, recording each head-scratching permutation.

In The New Universe: Night Train, 2009, we see down the long corridor of a luxurious train car. Two rows of seated passengers, well-dressed and jovial, read magazines and chat. It’s a prim view of travel by rail. Well, except for the woman who sprouts enormous talons from her coat sleeve. Or the woman who stares at the pair of flippers dwarfing her lap. Or the man behind her who entertains a swarm of giant amber-colored gems. All the same ingredients pop up in The New Universe: The Projectionist (Gold), 2009, but the mood dims, morphing from absurd to creepy. Here, an image of an archaeologist holding up a monstrously large, curving incisor with two hands is embedded into a lavishly cushioned and colorful bedroom interior. A gold disc blots out his face while a cadre of hovering emeralds sketches out a gloriole around his head. It’s hard not to ask questions about this figure: Is he a big game hunter? An occult spiritualist? Such concrete interpretations aren’t what Owen has in mind; the territory she’s exploring is disorienting and splintered, but she speaks its language fluently.

“So Close to the Glass and Shivering,” a survey of Owen’s previous work, is concurrently on display at the Art Gym at Marylhurst University, through April 9th.

Posted by John Motley on 3/8/10
RELATED ARTICLES
COMMENTS (0)
ArtSlant has shutdown. The website is currently running in a view-only mode to allow archiving of the content.