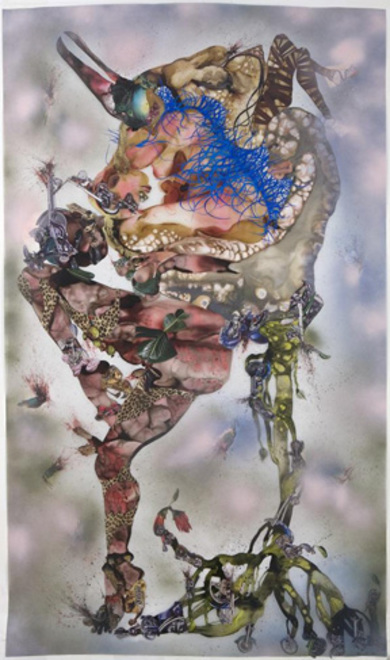 There were great projects and exhibitions happening in all parts of the city—from larger institutions to private galleries and art festivals.

In the summer of ‘09 Mark Lewis represented Canada at Venice and by late August audiences could encounter his films at the University of Toronto’s Barnicke Gallery where pavilion commissioner Barbara Fischer assembled Lewis urban films into a coherent portrait of the modern city. That coincided with screenings of Lewis’s documentary film at the Toronto International Film Festival and Three Films by Mark Lewis at the Art Gallery of Ontario.  It was a rare, in depth, collaborative opportunity to comprehensively engage the mature work of this Canadian film artist living in London.

Also in the fall of 2009 the Power Plant Contemporary Art Gallery mounted a comprehensive survey of Candice Breitz’s work, featuring a new commission titled Factum, in which Breitz masterfully edited hours of video interviews of identical twins reflecting upon their shared identity. Shown on paired flat-screen monitors in a large darkened room, the monologues become a kind of dialogue with the voices blending, rhythmically inter-cut to produce a new narrative of shared self. In the context of other major works such as the multi-screen portraits of Jack Nicholson and Meryl Streep, one could relish in how adept Breitz has become at her craft—editing the psyche’s innermost structures.

Perhaps the most striking juxtaposition was a pairing by independent curator Nancy Campbell of Inuit artist Shuvinai Ashoona with Toronto’s Shary Boyle. The large coloured pencil drawings of Shuvinai’s spirit-inspired Arctic world chimed beautifully with Boyle’s otherworldly imagery—especially Boyle’s projection work of figures tumbling into an abyss. This show at the Barnicke was a memorable highpoint of the season.

A good exhibition lingers in one’s mind and creates an expectation and desire to see more work that builds upon these possibilities. A flurry of other noteworthy art situations from 2009: Tony Oursler’s sound and video and light animated houses in the Luminato Festival; Iain Baxter’s Monopoly with Real Money (a restaging of a vintage early-70s performance), and Geoffrey Farmer’s mesmerizing, fully entrancing spinning light installation in a downtown church, set up for the one incandescent night of Nuit Blanche; coming across Cal Lane’s Love Rug (2008), Suzy Lake’s Are You Talking to Me (1979), and Elizabeth McIntosh’s  Untitled (sale flags and crowns) (2008) at Art Toronto—all of which were acquired on the spot by the AGO. Also of note was the installation of James Turrell’s majestic 5-column light-animated sculpture in the atrium of the new Bay Adelaide Center, a new benchmark public art work in the downtown core.

Iris Häussler’s He Called her Amber on-going installation in the AGO’s Grange House, in my opinion, is one of the most thought-provoking art experiences one may have anywhere, not just in Toronto. It was a challenge to have mainstream culture media digest the nuances of this installation.

(Iris Häussler, He Called her Amber. Assessment of discovered artifacts, temporarily housed in the historic Goldwin-Smith Library of the Grange.  Photo: Carlo Catenazzi/AGO 2008.)

The projects I am looking forward to in 2010 include exhibitions that are happening in the near future: Wangechi Mutu’s first comprehensive museum exhibition titled This You Call Civilization?, as well as a major installation titled Sculpture as Time: Major Works, New Acquisitions featuring Geoffrey Farmer, Rachel Harrison, Jonathan Monk, Tino Sehgal and a 19th century Yupik mask from Alaska that appears not simply to depict the visage of a Shaman, but if you look closely enough, perhaps one glimpses his presence, staring out through the eyes of time.

I am deep in the planning stages of Julian Schnabel: Art and Film – an exhibition that I have great enthusiasm for.  In the work of Julian Schnabel there is a deep and constant interaction between painting and cinema. This bond between two media, which is apparent in some of Schnabel’s earliest paintings, is the subject of the present exhibition. The exhibition will survey Schnabel’s painterly production from the 1970s through the present and include approximately 24 major works, many of them monumental in scale. The opening will coincide with the screening of his new film Miral at the Toronto International Film Festival this coming September.

Posted by David Moos on 2/7/10
RELATED ARTICLES
COMMENTS (0)
ArtSlant has shutdown. The website is currently running in a view-only mode to allow archiving of the content.