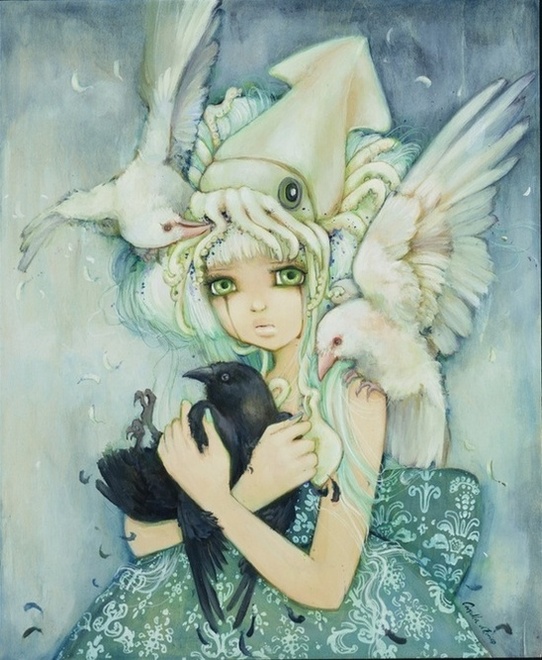 Camilla d'Errico: On the Scene in Vancouver

2009 in Vancouver was full of activity and anticipation for the Olympics, which open Feb 12th, 2010. Right now the city is going crazy amidst excitement and controversy.  There is a very strong arts movement in Vancouver that gets stronger by the week, it seems. New non-profit arts and artist collectives, groups, and communities are popping up, putting on exhibitions, shows, jams ... Vancouver is coming alive with arts and rightly so! We have a huge Asian community, a thriving economy and tons of creativity, a lot of it inspired by nature and the beautiful scenery around us. If you've never been to Vancouver, it'll take your breath away. I find inspiration just walking the city streets, having a coffee in any of the amazing tiny, independent cafes, walking in the parks, along the beaches.  It was an honor for me to be a presenter in Pecha Kucha in Vancouver late in 2009. I was amongst some amazing creative peers in the city, and it affirmed for me just how creative Vancouver is, in so many ways.

In 2009 I started to step back from painting, and to focus on my thriving comics career. This was challenging because my paintings have propelled me into the public's eye, and comics are still not fully embraced as an art form. But comic art is so beautiful and I can tell a story, develop characters and infuse life into them, feel what they feel, and create worlds ... ahh, comics! But I will not disappoint anyone, and by stepping back from painting for a little while, I'll be even more recharged when I pick up from where I left off. Having said that, in 2010 I am part of a group show called 5, which opens Feb 13th at The Ayden Gallery in Vancouver. Since the show opens during the Olympics I have decided to paint one full color piece whose theme is nature and Canada. I'm excited about it. Then, at the Mondo Bizzarro Gallery in Rome, June 5th, I'll have my second career solo show. The show will be entirely black and white, Helmetgirl themed. Helmetgirls were my original paintings/illustrations, and I'm going back to my roots with these paintings.

I truly hope that the artistic community will begin to give more consideration to the art of comics. Greats like James Jean, David Mack, Phil Hale and Rick Berry are all fine examples of pure artists at work in this medium. If one day I can join their ranks, I'll be a happy girl. In the meantime, I'll do my best to spread my art, my emotion, and my storytelling through comics and through paintings.

Camilla d'Errico became an artist via a very unusual route: comics.  She has had the good fortune of selling out every large and small show she's been in, over twenty by now, in galleries in Los Angeles, San Francisco, New York, Seattle, Vancouver, and elsewhere.  Her painting Aida was an ArtSlant Showcase Winner in May 2009.

Posted by Camilla d'Errico on 2/1/10
RELATED ARTICLES
COMMENTS (0)
ArtSlant has shutdown. The website is currently running in a view-only mode to allow archiving of the content.