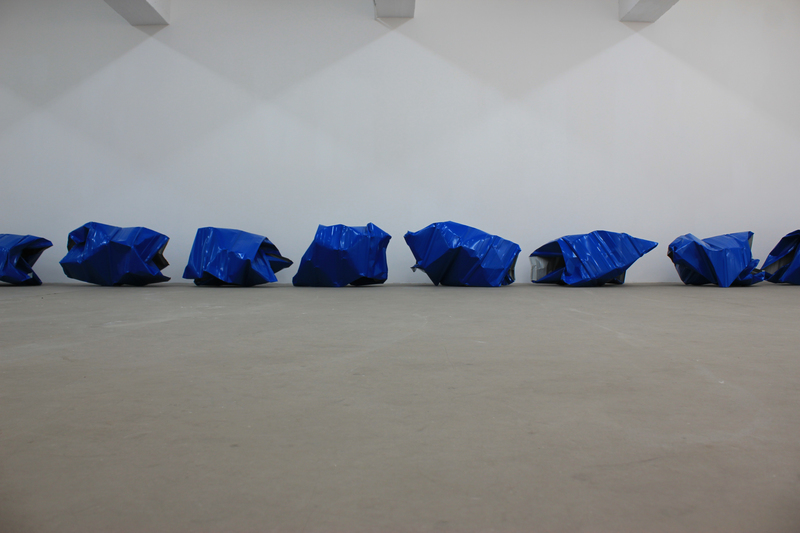 Visitors to Art Basel in Hong Kong will be treated to a collection of seventeen large-scale installation works, mostly by East Asian artists, each handled by a different gallery. Ten of the seventeen artists selected by Yuko Hasegawa, chief curator of the Museum of Contemporary Art Tokyo, come from Greater China and six from the Mainland alone. Hasegawa also curated this "Encounters" sector in last year's inaugural edition of Art Basel in Hong Kong, but she has selected an entirely different set of artists and only six repeat galleries. The impact of large works amidst bustling booths likely justifies the “Encounters” moniker; some rather naturally come to provide landmarks and meeting points for busy show-goers.

One of China's most prominent artists, Gu Wenda, is showing United Nations: Man & Space (2000), a collection of national flags rendered in human hair. This work stands out as one of the oldest pieces in this year's selection, distinguishing itself from many other Gu installations by stepping outside a deeply Chinese context without leaving the ink-inspired palette of the other works in the series (Hanart TZ Gallery).

Yang Xinguang, the Beijing-based Hunan Province native and graduate of the Central Academy of Fine Arts, is exhibiting a vision of Chinese sculpture less tied to the written word, but one still often recognizably tied to the Chinese physical environment through the use of found materials. Yang's 2013 work, Blue, is a departure from his earlier works—in wood, earth, and stone—for its use of thick corrugated metal sheets, the likes of which form roofs or temporary walls across China. In Blue, sheets are crumpled into thirteen similarly sized crags that disrupt the viewer's sense of density (Gallery Exit).

Sun Xun's Jing Bang: A Country Based on a Whale reportedly plans to issue citizenship documents to visitors (for a price), paralleling the (considerably more expensive) passport-for-investment programs that many of China's richest have used to obtain Canadian or U.S. documents. This performance-installation, if realized as described, promises to raise questions of exploitation, identity, and inequality, all in the context of Sun's high-contrast illustration style (Singapore Tyler Print Institute / ShanghART).

Other Chinese works appear less concerned with their national or international context. Wang Jianwei's work looks like warring viruses enlarged to room-size proportions and rendered in auto exhaust systems (Long March Space). Shen Shaomin's I Touched the Voice of God (2012) conjures the debris of a battle on the Moon (Osage Gallery). Xu Qu's Conquer (2013) appears to capture the open seas inside an array of sails (Tang Contemporary Art). 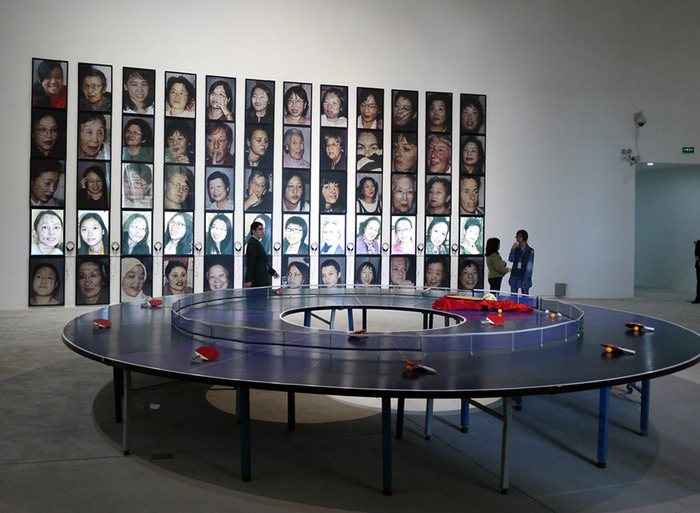 Lee Wen, Ping Pong Go-Round, 2013, Installation view at The Realm in the Mirror - the Vision out of Image, Suzhou Jinji Lake Art Museum, 2013; Courtesy of the artist and iPRECIATION, Hong Kong

Seoul-based artist Yeesookyung's Thousand is a mis-reconstructed array of broken ceramics fused back together and ornamented with gold at the joints (Kukje Gallery / Tina Kim Gallery). A scale-up of her earlier Translated Vase works, the distorted and intermixed reassembly plays on a centuries-old practice known in Japanese as kintsugi, in which cracks in repaired ceramics are accented in gold. (This writer, for one, has been bombarded with online viral images of such artifacts in recent weeks.)

Japanese artist Kishio Suga's Emerging Space Amidst Branches sets off an unnaturally smooth surface bounded by branches that, because upturned, seem not organic but robotic (Tomio Koyama Gallery). Miyanaga Aiko's Letter (Hong Kong) is a suitcase whose contents are visible but inaccessible, as the case itself is made of solidified transparent resin (Mizuma Art Gallery). 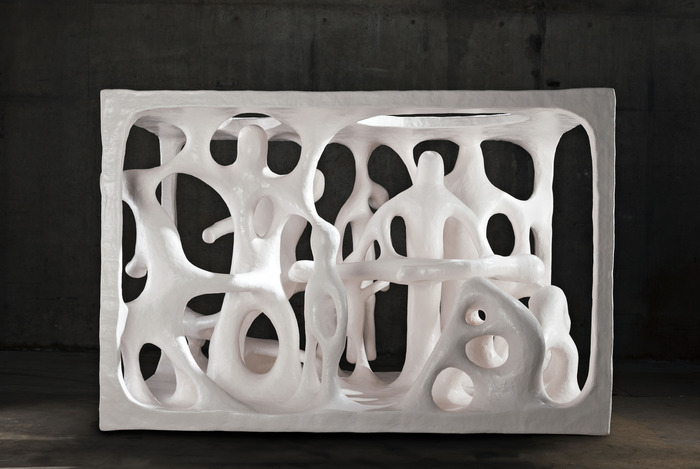 Finally, Hasegawa has selected several stimulating works from outside the region. Marta Chilindron's Cube 48 orange is a massive series of colored transparent surfaces that visitors can unfold from its most compact form as a cube (Cecilia de Torres). Tobias Rehberger's Homeaway is a replica of a favorite Frankfurt bar made in unglazed china (Galerie Urs Meile / neugerriemschneider). Rebecca Baumann’s Automated Colour Field (Variation V) mechanically cycles through near-infinite grids of varying colors (Starkwhite). And Atelier Van Lieshout's The Burghers is a Rodin-inspired fiberglass sculpture in which human forms appear as if melted or eroded, but not collapsed (Galerie Krinzinger and GRIMM).

The effect of placing these works in the crowded convention center is yet to be seen. The interactive works by Sun Xun, Lee Wen, and Michael Lin stand a chance to thrive as nowhere else. Marta Chilindron’s work inviting visitors to move may on the other hand be overwhelmed, as may the apparently atmosphere-intensive works of Shen Shaomin and Kishio Suga. It will be up to the organizers and installation teams to balance ambition and multitude in a context where not even sheer size guarantees notice.

(Image on top: Yang Xinguang, Blue, 2013; Courtesy of the artist and Gallery Exit)