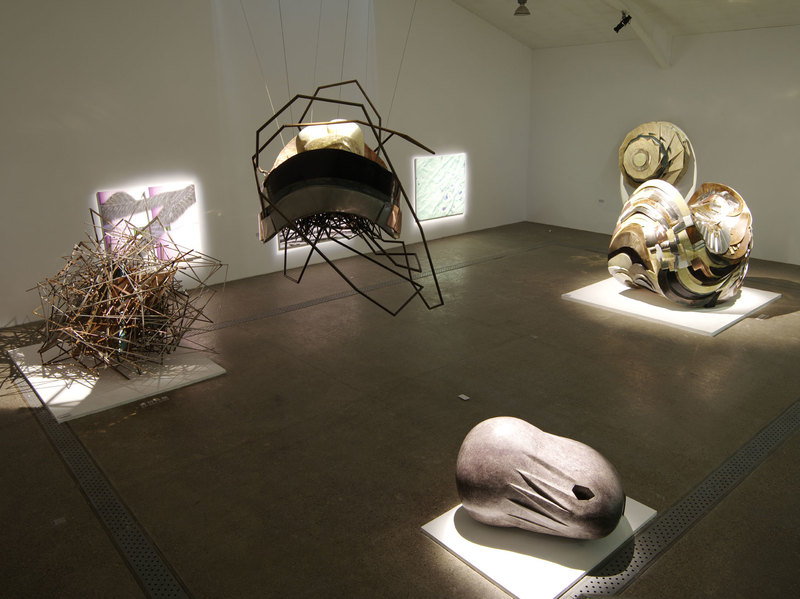 Rupture of Form and Meaning

Wang Yuyang’s set of disparate sculptural constructions that make up “Liner,” at Tang Contemporary, betray their design by computer in their fantastically ornate, mathematical shapes, spurs and swoops of material. They seem to express an aesthetic typically seen in the virtual shapes produced by CAD software. In the gallery they become slightly unreal or impractical forms: large cubes of marble are juxtaposed with jointed lengths of the same material, inserted with lengths of gleaming aluminium sheets; jagged wooden elements iterate and displace, their interlockings and overlappings forming a complex circular construction on the wall; a saddle-like construction is made up of multiple curved layers of hundreds of different materials proceeding in waves around the shape. A series of paintings accompany these sculptures, which seem to have been formulated by the same process, but when reduced to the flat surface of the canvas these works lose the “presence” in space that the sculptures effectively express.

As the titles of the works suggest, these realisations (through software and then through material) are only the latest manifestations of a process of seemingly arbitrary conversions initiated by the artist. The saddle construction is generated from a quote from the Bible (Anecdote / Bible 2013), the circular piece comes from the book “Making the First Universal Computer” (Evidence / Engines of Logic 2013), and the marble piece simply from “Random writings of 1 and 0” (Tenor 2013). In each case the genesis of these objects is prior to the computer-generated forms; they begin with those strings of 1s and 0s generated randomly or from the texts. 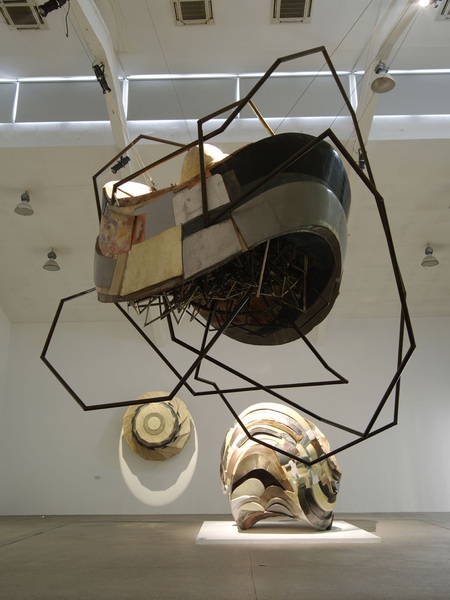 This process—of a source translated in various ways until we reach these structures—is one of deliberate and repeated rupture, both of form and meaning, leaving each stage distinct and discrete. What this seems to suggest is an inherent incommunicability, where communication is understood as the progression of meaning from point to another.

Looking at these pieces, and knowing their process of creation, it is difficult not to feel a little hopeless about the condition represented by these objects. They are complex, but to what purpose? What is their aim? And how can we relate to them?

Like much conceptual art, the hand of the artist is deliberately (even forcibly) done away with in this show. Conceptualism has often focused on a questioning of the artist’s presence in the work, but historical examples have often held a promise of relief through a lightness of attitude, which encourages the view that—even though these creations seem shut off from a direct relation to the body, to the audience, or the world—this is not a hopeless situation and leaves room for a resolution of this seeming stalemate. But in Wang’s works there is an earnestness, an aloofness, that removes any humour or irony that might leaven the atmosphere. Even the title of the show, “Liner,” it becomes apparent, is a random choice. 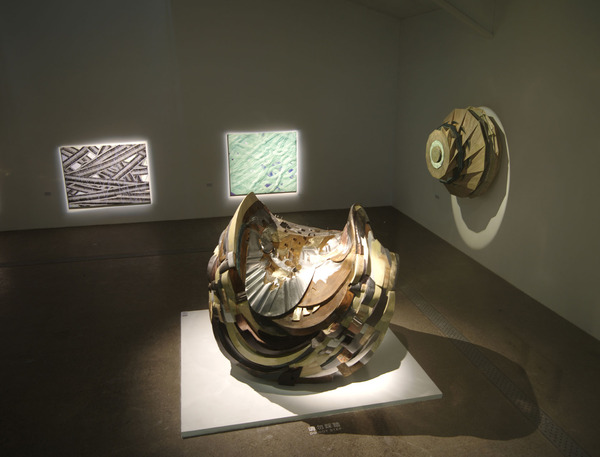 Wang’s previous work has played with the idea of a meaning that inheres in an object. In one series of works he recreated everyday objects in flexible silicon, that then breathe in and out in a disturbing way through the action of an internal fan. Such pieces relate to the body through metaphor and draw the audience into their little worlds through empathy. But the works in “Liner” shut off recourse to their source or to a meaning that encompasses the whole process of creation; the translation process employed by the artist leaves the audience with only the implication that these shapes have a history and a communicable meaning. Although they are in fact as direct an interpretation of their prior source as you can get, they manage to lose all relation to it in the process.

This rupture is obviously a deliberate ploy by Wang. It seems to serve as a commentary—writ large—of the inherent fallibility of accurate communication between one thing and another. Evident effort has gone into these structures; they are highly elaborate creations, yet they are mute as to their origins. These origins exist as part of the work; yet ultimately sit out of reach to the audience. These are impenetrable objects and as such frustrate the viewer who looks for any meaning beyond the virtual amongst them.