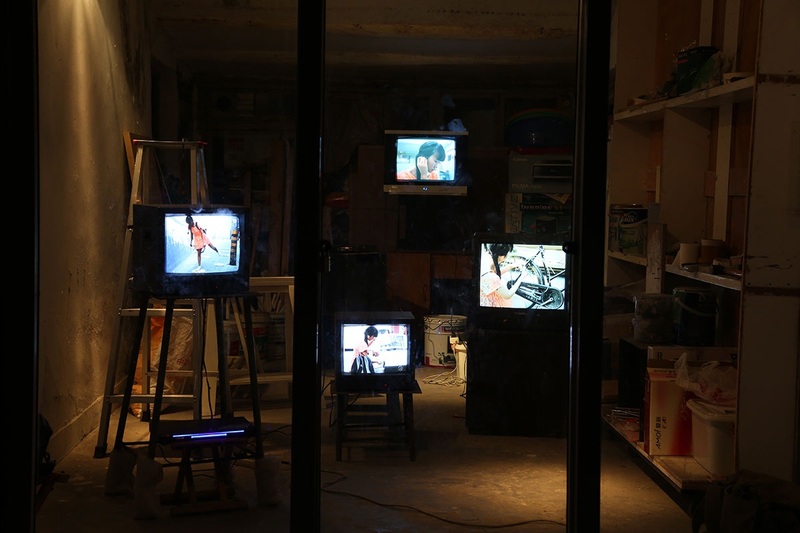 The Strangeness of Ritual

Peeking through the glazed and systematically inaccessible storefront of the Arrow Factory space (inaccessibility being a usual feature of this small non-profit space’s presentations), a scene reminiscent of a storage space or garage is visible. In amongst the detritus that litters the space—the construction tools, ladders, paint tins, sheets of wood, and bags of unidentifiable materials—a series of television monitors sit on chairs or boxes, and make up the deliberately make-shift presentation of artist Fang Lu’s four short stop-motion videos.

This state of disrepair creates an “under-construction” setting, lending a temporary air to the proceedings. The setting appears at times within the videos themselves, providing what might be seen as a home and initial starting point for the single protagonist of the videos. This eminently serious woman in a bright orange dress undertakes minutely documented activities that include and supplement what one might interpret as the routines of her daily life. These supplements begin with the apparently unremarkable activities of her waiting in the space, shopping for groceries, and pushing her bike through the surrounding hutong alleyways. These everyday points of departure are recast as stages in a set of surreal, ritualistic activities. These activities see her adapting her purchased provisions and objects plucked from her knapsack as tools of mini roadside creations. 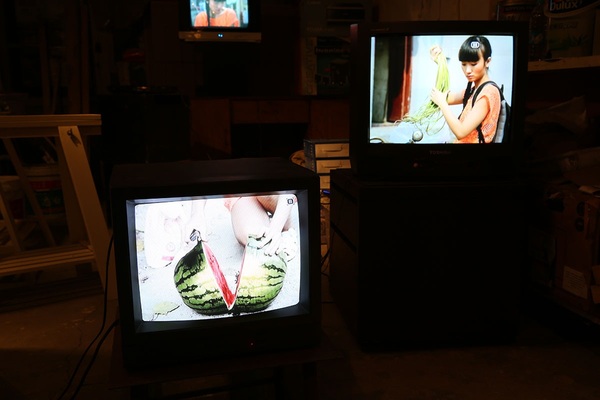 Having bought vegetables and fruit from the local store, she proceeds to occupy the hutong alleyways with the provisional preparations of these items. Several round flatbreads are laid in a staggered line along a thin alley forming stepping-stones for her to jump between. Carefully taping a sheet of white paper to the hutong wall, she proceeds to bite into and spit out various fruit onto the pristine surface before extravagantly signing the sheet. Long, stringy vegetables become decorative elements when attached all over her bicycle. Using half a cut watermelon as a seat she mixes flour and water on the road surface to create dough that she presses into the rough bark of a nearby tree.

These recorded activities build on previous works by Fang Lu, who seems to take particular delight in playing with food and abstracting its preparation into performance-like routines: for instance the frenetic acts of food preparation interrupted and diverted by the continual resetting of an alarm clock seen in Automatic Happening (2010); the adaptation of food as a body covering for a model in Rotten (2011); and the focus on alternative and bizarre interactions with eggs in How to Eat Eggs (2009). 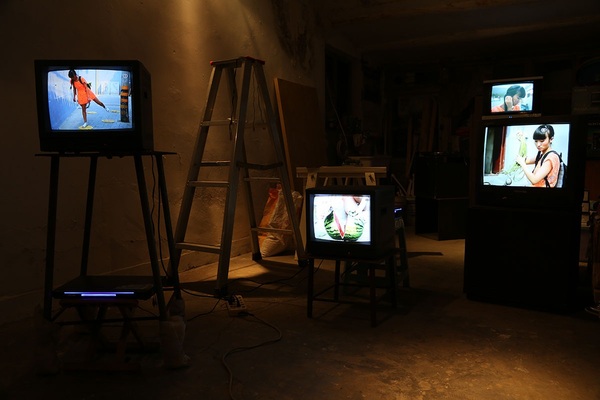 The food is, of course, only part of the story; it is the material that the events build upon. In each case the food is a player in a ritualistic activity that the artist performs or institutes, adding a sense of the ridiculous and obsessional to the situations. The shift from normality into abnormality is a feature of the ritual process, not least in its presence in belief systems as ecstatic technique, diverting activities into strangeness through repetition and enforced adherence to arbitrary or out of the ordinary systems. In the case of Fang Lu’s works the quiet intensity of her own and her protagonists’ actions also forces the processes to take leave of reality, and step over a threshold into strangeness.

For these “Amorous Acts,” the obsessional nature of the experience of love is perhaps a key reference. It is never made clear for whom the “amorous” applies, whether the narcissistic feeling of the woman herself or for some other figure of attraction – but she is lost in her activities, making do with them in amongst the daily life of the hutongs, as if she acts and exists in her own world, apart from them. In these succinct and thoughtful works Fang Lu successfully counterposes the charming otherworldliness of the woman’s activities without ever forgetting their surreal impact on the life of the street.