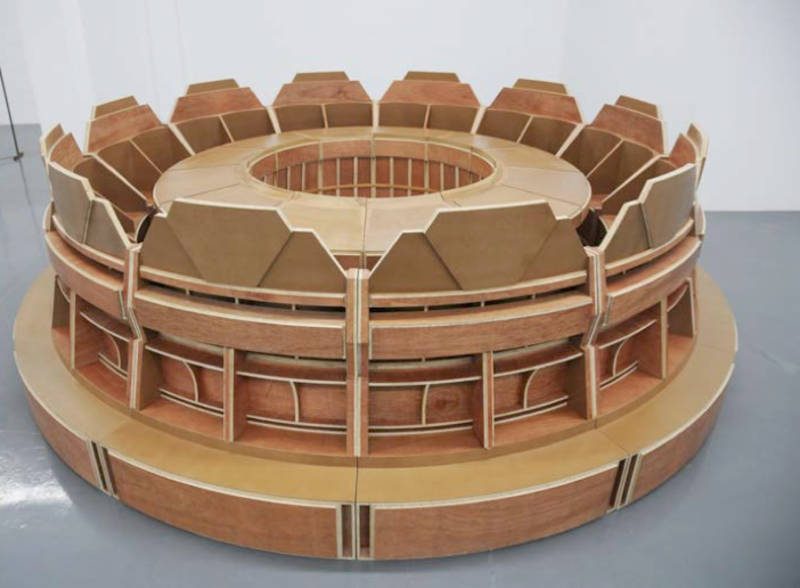 Form is the Most Political?

Long March Space presents a strong body of new works by Liu Wei, which seem to progressively build upon and develop various aspects of this artist’s works. The results suggest monumentality in their occupation of space while retaining an uncertainty in their inability to be defined and interpreted. This opacity of the pieces is apparently mirrored by the reticence of the artist to elaborate on them too specifically. The viewer is offered little aside from some general statements made by Liu and his gallery to accompany this show, which seem questionable in the context of the work.

Liu Wei is lauded as an important artist in the Chinese art world, and to an extent deserves that accolade. He has developed various patterns for his artwork, which he has committed to and has honed over time. Liu Wei produces work that seems intelligent and thought through, providing a serious basis on which the art world can place a certain amount of trust that—unlike many artists in China—he will not undermine that solid base with some random change of direction.

The canvas-clad structures in the left-hand room seem to take off from the artist’s previous wood constructions. The prior works put together scraps of wood into monumental, symmetrical constructions. These new pieces appear as if these have been kitted out with thick, green canvas material, perhaps from tents, given the metal rings that pierce the material in places. This material is folded, stitched and gathered to fit the underlying structures snugly, creating a tense, sheer surface, punctuated by the forms that push through from underneath. These massive structures are divided into sections and re-assembled in arrangements in various configurations, lying on the floor, leaned against the wall, or supported by scaffolding which raises them up high. 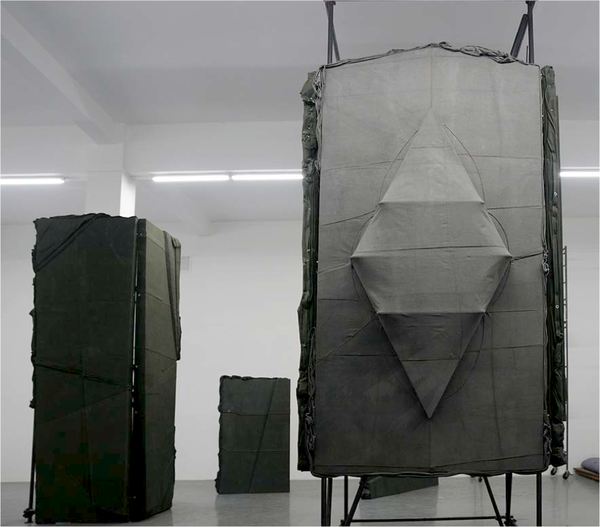 These structures come across very much as monuments through their physicality, and their presentation on the scaffolding. But these are monuments that are simply surface; shrouded by the tight-fitting canvas, they have little solidity behind them. The exposed scaffolding presenting the pieces hanging from it, as well as the various works lying around on the floor, make of this something of a construction site, where monuments are perhaps on temporary storage and display, awaiting shipment to their final destination, to take on the attributes of heroic elements for architectural spaces or surfaces.

The adjacent room presents an example of similar canvas pieces in lighter hues, as well as a heavily abstracted example of Liu Wei’s Purple Air series—a large triptych in monochrome of a vertically striated cityscape. But the focus of this room is a wooden and metal construction. The wooden structure is a circular arrangement of plywood sections seeming to create an inward-looking seating arrangement around what appears to be a central table. Overall, the shape is a little like a lotus flower, and its size means one can only see inside the structure from a series of separate viewing platforms the artist has made in wood and metal offcuts, and distributed around the edge. These seem to promise a glimpse of hidden features to the structure, however, the view from the platform reveals that little is new. Perhaps the meaning of these is simply to include the audience as part of the piece, pushing them across the threshold to interact with the artwork. It is not necessarily gratifying for the audience that takes this part, but perhaps holds something for the other audience that looks on.

Liu Wei himself seems less than communicative about these works. As Long March Space say, in their exhibition text: “Liu Wei refuses to give this exhibition an explanatory title, insisting there is nothing to be said in words and that nothing can be said.” This seems a fairly consistent position taken by the artist, leaving the works to speak for themselves, without deeming it necessary to provide additional information. I expect this must make life difficult for his gallery, hence making something of this nothing by foregrounding the artist’s reticence as a (negative) feature of the show. But such are the disparities between the position of the artist and the gallery representing him, and this is where interesting frissons occur in the negotiation of the presentation of the artist’s work.

So the text also brings in some interesting and relevant terminology in relation to the work, such as  “vocabulary” and “logic” which present the work as being part of a larger system that the artist has established or is developing. This helps to present the works as a solid collection that can be linked together in a set, and hence potentially understandable whole. If one cannot grasp them in terms of a “meaning,” then at least they can be understood within a systematic world that allows for them to be conceptualized as elements of that world: ideally a world that holds meaning as a coherent entity without necessary recourse to symbolism. 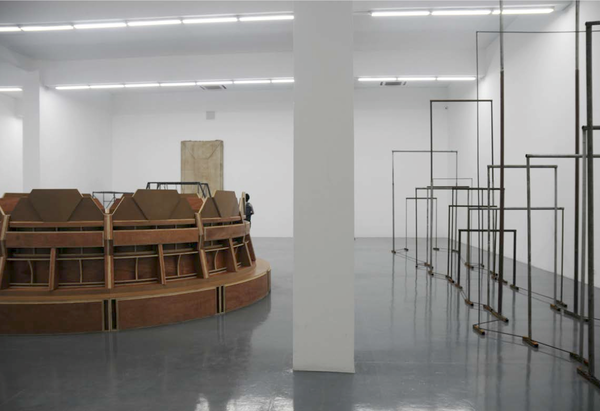 Although I generally think the structures and consistency of Liu Wei’s work make this show a powerful experience, my problems begin with another of the artist’s quotes from the press release, where he says: “form is the most political.” In the context of Liu Wei’s work, this seems a misplaced statement. The reticence of the works (and, apparently, the artist) seems to run counter to the idea of them being “political,” or at least this is such a vague statement that it could apply to anything. To be political, I would imagine, must involve an engagement with society and the audience that would entail some kind of questioning of their political positions or assumptions. Possibly one could make an argument for the politics of the artworks’ indirect engagement with the audience through its occupation of space, or its (minimal) direct engagement with them in the staging of the circular construction. Or perhaps it could be seen in a social sense in the foregrounding of the relationship between the artist, the gallery presenting his work, and the audience experiencing it. But none of that is clear enough in this exhibition.To be fair, the statement, “form is the most political,” is offered up by the gallery with little additional contextualisation, so perhaps there is more to it than is apparent given the lack of background.

Although this is a formally strong show by Liu Wei, there is a limit to how far one can contextualise the works as political, and the evidence on the ground—in the gallery—gives only weak support to such grandiose statements.