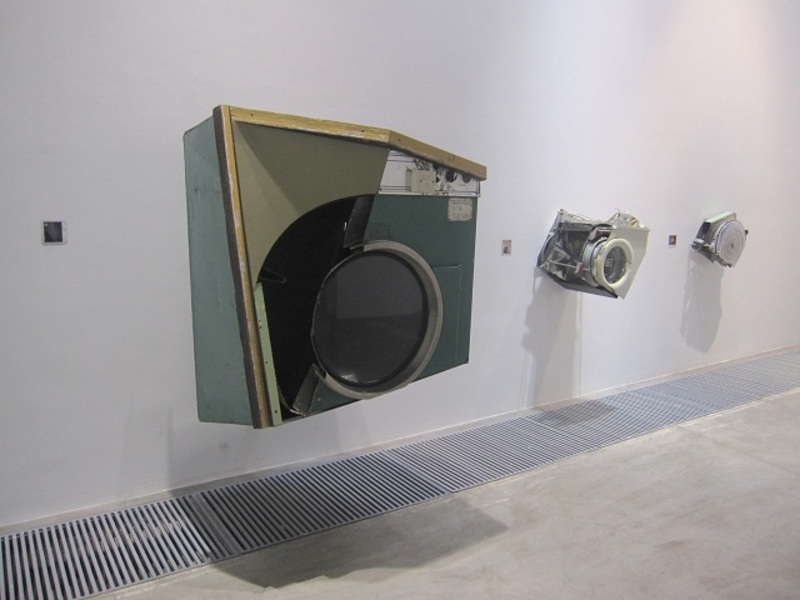 With an abrupt reference in its title to a book by Roland Barthes (which appeared in English as Camera Lucida), this show gets underway, presenting works by five Chinese artists each with a relationship to the “phantom” of photography.

The artists’ particular approaches to the medium of photography are varied. In this show, Liu Wei is the only artist to include actual photographs, with several examples from his series As Long As I See It, from 2006, on display. These works demonstrate a certain instrumentality by the artist, as he takes a Polaroid of an object and then proceeds to cut away parts of the original object to match the view presented in the photograph, presenting them both together to suggest some kind of cause-and-effect relationship.

Liu Wei’s view of photography as a process forming the world in its image is the most straightforward use of the photographic medium in this show. The other works step away from the object of the photograph into terrain that addresses the meaning of the thing that is called photography. 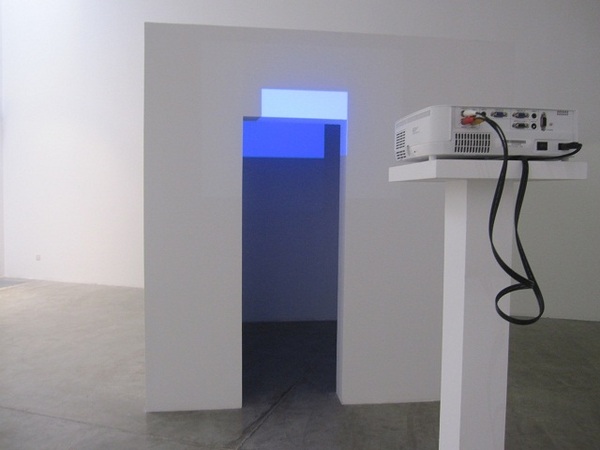 In a play on the relationship between painting and photography, ZhengGuogu presents The Line In Front of MoMA’s Entrance (2008–2009), a hyper-realistic ink painting based on a photograph. The painted technique relates back to traditional Chinese ink painting, while the subject matter—the photograph as such—is obviously more contemporary. Taking the meaning one level further, the subject matter of the photograph itself is a queue of people waiting outside the Museum of Modern Art in New York. It might be suggested that this particular subject adds a touch of institutional critique into the mix, although it would be a very facile address of the technique, and perhaps I am clutching at straws. In general, this piece is unsatisfactory for its apparently unimaginative and banal presentation of the layers of meaning involved.

Entering a blacked-out room next to this triggers a camera at eye level on the far wall to begin shooting, allowing a small amount of light to penetrate the darkness. The shutter clacks off a refrain which the artist Wang Yuyang tells me is binary code for the sentence “And God said: Let there be light.” Such a presentation of the instruments of photography, and their ability to communicate a message aside from the production of a photograph itself (albeit one which cannot be easily interpreted without assistance) is an interesting development for Wang. In a previous series of works by the artist (whose titles begin Breathe…) he reproduced items of machinery—an AC unit, a mini-van, an ATM, etc.—in pliable rubber. These were then fitted with a fan that caused them to appear to breath in and out, suggesting a form of life that the artist related to Buddhist principles of objects in the world. In this new work the object is now attempting to communicate, not just to express life, marking an interesting step beyond the precious work.

Another interesting work is Liu Chuang’s 15#, 2012, a small featureless white box of a room built within the gallery space. On the outside, facing the doorway into this room a digital projector is set up which casts an animation of a wobbly, expanding and contracting blue rectangle, overlapping the doorway and the interior wall. This piece plays with the forms of display of an image, in this case, the projected image of a blue screen suggesting the projector is not actually projecting any image but in its default state. By projecting against the white cube, this piece treats this object as the medium on which an image can be formed, rather than as the idealised space of the White Cube to be forgotten to allow for concentration on an artwork. 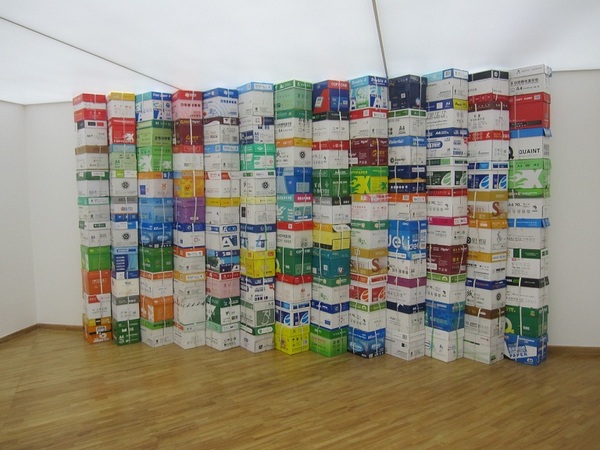 Upstairs, artist Zhang Liaoyuan has stacked up boxes of commercial copier paper of various brands and qualities in a saw-tooth arrangement against one wall. This piece, A4 and A4 and A4, 2012, deals with the nature of the potentialised image, embodied within the materials on which it will eventually reside. This, for all its simplicity, represents (for me) an intelligent approach to the subject matter of this show, working effectively on multiple levels, through meaning and form.

At the beginning I said the reference to Barthes was abrupt, by which I meant that this reference was posited but then not developed in the show itself. The curators call this “saluting Barthes” but I think it is not sufficient to leave your engagement at that point. While it’s a shame that the curators did not pursue the reference in a productive or clearly defined manner (which might have led to a deeper engagement with the artworks by themselves and the artists), overall this is a show with great potential, with a good range of works that take the basic premise (the presence of photography in art) in interesting directions.

Lionel Cruet Answers 5 Questions
11/6/18
COMMENTS (1)
Painting and photography
I guess, although there is no image of the painting, the language and special Chinese material indicate an old question about Aura and mechanism
Comment by: visitor on Wednesday 05/16/12 at 9:48 AM
ArtSlant has shutdown. The website is currently running in a view-only mode to allow archiving of the content.