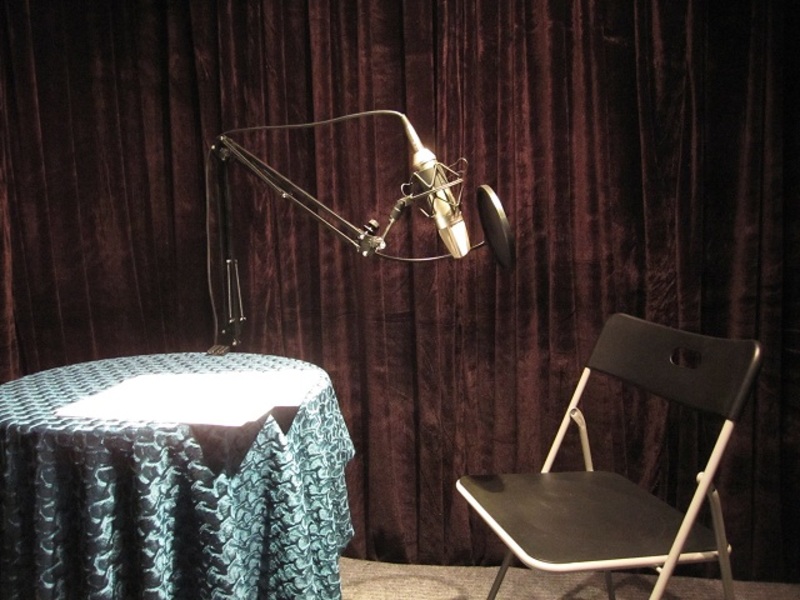 There are plenty of art exhibitions that are obscure and difficult to fathom – this is usually a cover for a lack of thought and depth that becomes painfully apparent when they are placed under the least analysis. So I’m very happy when a show comes along which, while flirting with obscurity and confusion, manages to hold my attention with the possibilities for meaning that it urges the viewer to explore, and productively uses a certain level of obscurity to sustain the interest in delving further into the works. Li Ran’s new installation at Magician Space seems to be just such a show.

The installation of Li Ran’s Mont Sainte-Victoire is comprised of three related parts. On the left a window-like opening in the wall frames a small, rather theatrical space. Backed by heavy, velvet curtains, a small table and chair sit in front, while on top of the table sit some sheets of paper and a professional microphone. The space implies a figure that would be seated reading from the typewritten script into the microphone. In the video projected on the opposite side of the room, this figure is revealed as the artist, although minimally “disguised” by a pair of “retro” glasses. The script presents the transcribed words of various people, articulated through the artist’s varying intonation and characterisations. For the opening of the exhibition, the artist provided a live reading of this script in the left-hand space, but the video shows a pre-recorded version of the same material. 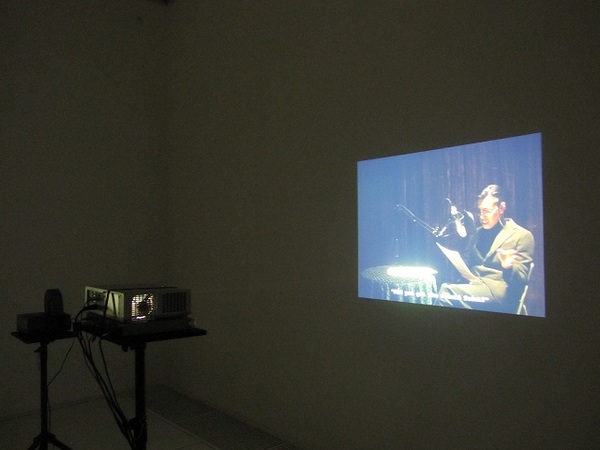 In between these disjointed occurrences of the script, in the middle of the room, are three free-standing slide projectors, their circular carousels clattering through a set of details from paintings, drawings and other images, the sources for these images cutting a broad swathe across the history of art, but always focusing on small sections of the larger images.

The artist is apparently something of an accomplished mimic. In this installation he puts this skill to good use to add humour to the proceedings and to confuse the boundary between the artist and the various characters he portrays. Present in his reading are various incarnations of a narrator, an elderly person, a middle-aged man, a youth, a poet, a rapist and a victim, with combinations of these also appearing with adjectival epithets including "honest-," "cunning-," "shameless-," "life-coach-" etc. rendered by the artist through modulations of tone and gesture.

These characters, reproduced through the artist’s mimesis, recount an apparently rambling narrative, at times seeming to quote from art history, while dramatizing the whole as a sort of disjointed dialogue, in parts suggesting William Burroughs "cut-up" textuality. At the beginning of the speech, the Mont Sante-Victoire of the title is mentioned as if by someone living in view of its peaks. For the proto-Modernist artist Paul Cezanne this mountain became one of the pivotal images through which he developed a formal practice that laid the way for Cubism in the early 20th Century. The relevance of this to Li Ran seems to lie in its repetition as an art-historical marker, as signifier, related to the general subject of duplication and the nature of change through duplication, a process forming part of virtually every aspect of this show.

In the dense text accompanying the show, the critic Su Wei makes much of a general connection between Li Ran’s work and writings on “the virtual” by Robert Musil and of Gilles Deleuze, particularly from Deleuze’s early text Difference and Repetition. Su Wei picks up on the nature of repetition as presented there through aspects of the installation: including the dubbing script with its allusions to art history; the presentation of the pseudo-recording studio within but held apart from the gallery; the mimicry of the artist’s voices; the semi-academic slide shows. 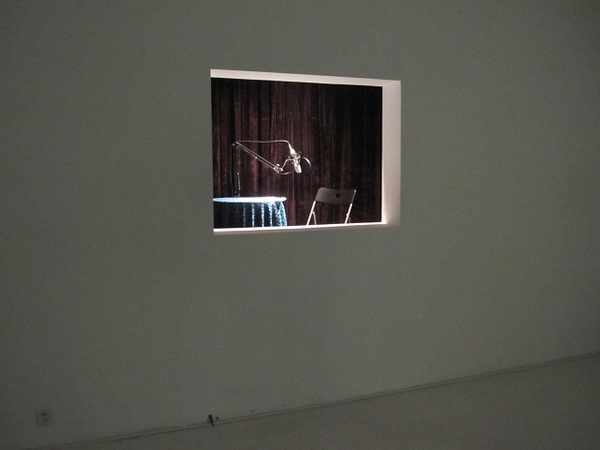 The virtual is a subject which is difficult to get to grips with at the best of times, and while Li Ran’s work perhaps adds to the vocabulary of its representation, I am not certain that it does much to make it clearer. It is perhaps inherent to the nature of a Deleuzian concept that it should remain this way, but this leaves a sense of frustration at the difficulty of the work and the accompanying text.

That said, I really welcome the opportunity to experience a show that attempts to go that much further in challenging my thoughts and expectations. Of course, such a move risks shooting itself in the foot by alienating the audience if it puts unnecessary barriers between them and the exhibition’s meaning – so it’s a fine balance. Mont Sainte-Victoire is a show that, while it will never fully reveal itself, manages to create and sustain an interest in the work by capturing the imagination through its fictions and humorous mode of presentation.