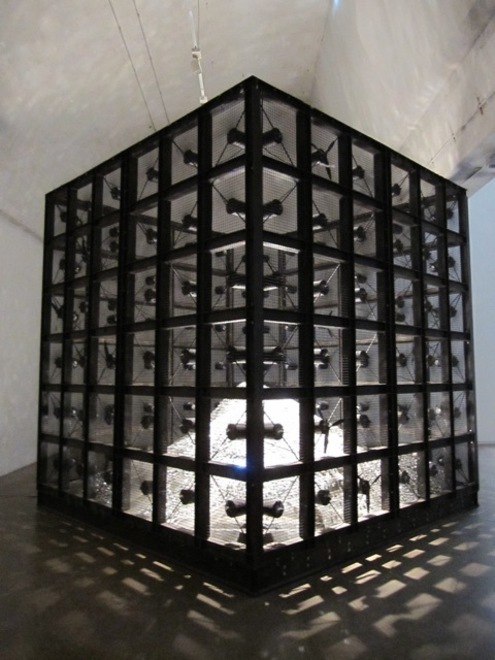 My disappointment with this show stems from the fact that it genuinely appears to be an interesting presentation, focusing on a well-selected group of mid-scale installations. The curator has avoided the temptation to simply place them together within the gallery space, instead creating appropriate, custom-built spaces that the works inhabit nicely. But it is unfortunate to have to say that Developing Phantom falls down on a conceptual level in its lack of coherent critical engagement with the artists and works, and on a pragmatic level with its confusing organisation and presentation.

Entering Jiang Zhi’s installation you find yourself in a circular, darkened room (I mentioned the photographic and painted works by this artist in my recent review of The Power of Doubt). A turning video projector sits in the centre of the room like a searchlight, intermittently throwing a circular spot of light onto the wall. This spot reveals a person’s face in its dazzling glare. The faces are held fast in the light, illuminated for a few minutes each, before the light is extinguished and tracks around to another part of the room. While the faces are lit up they react in various ways: the light is obviously uncomfortable for them, as they immediately squint and shield their eyes. This piece effectively presents the psychological effect of this exposure, as the faces fidget and in some cases soundlessly nervously chatter, seeking to defuse their predicament.

Behind this installation stands the steel enclosure of Zheng Yunhan’s The Depth of Light (2008) (full disclosure: I used to run a gallery which represented this artist). A large perforated steel cube, its gridded structure made up of large fans blowing air into its interior. Its black structure dominates the space, reaching up to very near the lowest parts of the saw-tooth ceiling. The piece is lit from within by a large hanging searchlight, illuminating and reflecting off of a mesh blanket embedded with large crystals. This piece has always puzzled me, being difficult to contextualise within Zheng’s previous works that had displayed a marked historical and geographical concern with China’s recent past, via video and photography. By contrast, this piece seems to deal with more fundamental materials, as it focuses on wind, light, metal, crystal: constituent elements that seem to refer to basic, zen-like concerns with the space it inhabits and the universe. 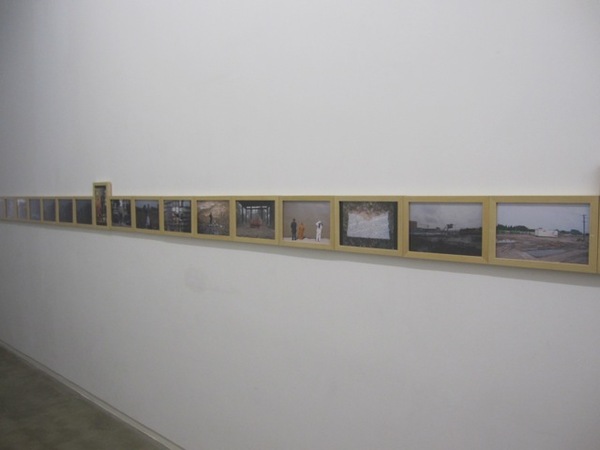 Artist collective WAZA have worked with “Society Youths (sic)” (a seemingly disparate collection of people from their hometown of Wuhan), to assemble a set of photographs, unprepossessingly presented in a string of frames along one wall. The claim made in the curator's text for the participants being “not only inconsequential molecules in the large and miscellaneous historical community but also individuals who pursuit self-realization in the dignity and balance (sic),” is difficult to see in this random series of snapshots.

On one side of Hexie Baroque’s installation a television stands on a polished floor with an old cupboard placed on top of it. The monitor loops a small section of Barack Obama’s presidential inauguration speech, saying: “Well, I do not accept second place for the United States of America.” At the opposite end of the room, the bold letters spelling the words “Shopping Poetic” are formed out of LEDs, progressing through a rainbow of colours. In another section of their installation, a series of turning metal advertising hoardings, clatter through their facets, revealing statements taken from the novel “Walden” by Henry David Thoreau, as well as “a stone within Beijing Huan Tie Art Area” (an area on the outskirts of the city where many artists have their studios). This attempt to create an intertextual effect using the changing facets of the frames is perhaps overly simplistic. 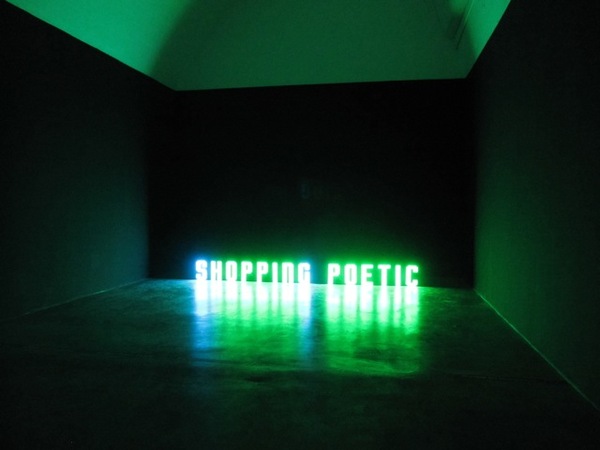 In a confusing anomaly, on one side of the gallery there is a darkened video room and a further installation (only accessible through this room). Neither of these works are mentioned in the text for the show, nor labelled in any obvious way. They also do not seem to be related to any of the artists listed as part of this show. The only relation is that in the installation a rickety structure made up of rings of metal gauze somewhat mirrors the appearance of Tatlin’s Monument to the Third International – an image that also appears (in schematic form) on one of Hexie Baroque’s advertising hoardings, but the meaning behind this relation is unclear.

The omission of sufficient conceptual structure and information in situ shifts the development of an understanding of the show very much back into the hands of the audience. Although this is arguably refreshing in its departure from a strict dependence on the cult of particular curators or artists, in this case it very soon becomes frustrating. We are left with what feels like a half-finished show, without the institutional support a group show with any claim to success should provide.

(Image at top: Zheng Yunhan, The Depth of Light, 2008; Courtesy of the artist & Pin Gallery)