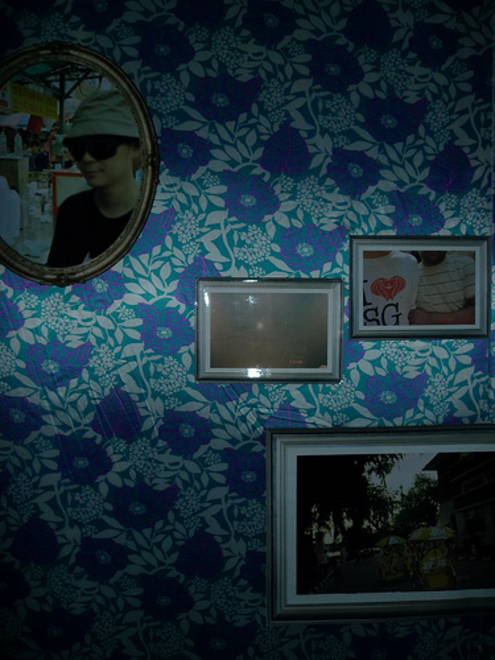 Doubt is a concept close to my heart (for all the right – and wrong reasons). It is a state of being separated from fixed ideas, moving into a region where certainties flicker out like an ageing fluorescent strip. I feel this movement into doubt is a primary activity of art: simulation, illusion, questioning, all the while leaving the audience open to new thoughts and ways of thinking. The artist does things and I ask: “Why are they doing this?” Doubt is a region of productivity, of investigation, of crossing boundaries in every category, the genesis of potentiality.

The title of Hou Hanru’s show “The Politics of Doubt” at Times Museum immediately suggested a presentation which might display a sense of instability through the works, but what I ended up seeing was a set of rather stable—albeit interesting—works of photography and video, under a fairly simplistic curatorial premise.

To generalize unforgivably, most of the artists worked with the image’s troublesome relationship with fiction and reality, playing on the narratives read into it. Hamra Abbas, Adel Abdessemed, Du Zhenjun, Thierry Fontaine, Jiang Zhi, Sun Xun, and Wong Hoy Cheong, with narrative or political aims, create worlds from scratch or tweak our assumed worlds within the photographic or video frames, opening questions for the audience to interpret.

Bulgarian photographer Dimitar Solakov was invited by Nedko Solakov (his father and a well-known international artist who had a large solo show at Beijing’s Galleria Continua last year) to present his relatively straightforward shots of the “new underground life” of his friends. The father then added his paternal comments to the pictures, admonishing and sympathising in equal measure, usurping the anti-heroism of the images with a touch of sarcasm.

Sarcasm (or humour) also surfaces in Romanian Dan Perjovschi’s incessant cartoons. At Times Museum a series of drawings made during the artist’s previous visit to China in 2009 is shown on a monitor, an endless litany of droll commentary. Around this, snapshots of hastily painted walls record the mistakes and deliberate erasures in the communication of information in the world around us (from the series Corrections 2008–2010). 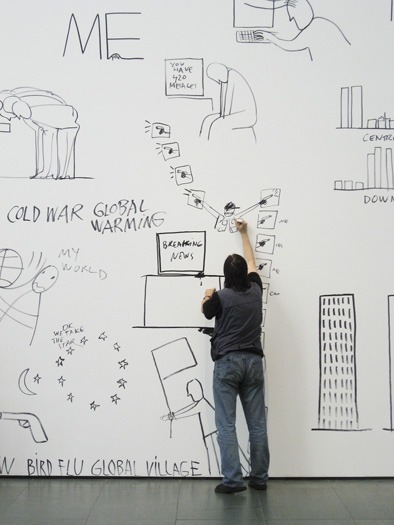 Dan Perjovschi, What Happened to Us?, Permanent marker on wall, installation view of Museum of Modern Art, 2007; Courtesy of the artist and MoMA

Overall, this installation was perhaps the most coherent arrangement of the spaces I have seen so far in Times Museum’s tricky galleries. Hou Hanru effectively controls the audiences’ route through the space by the insertion of a wall coated in semi-reflective metal foil, dividing the space lengthwise into two long corridors. Along this route he creates discrete areas for each artist using the many changes in direction. Right in the centre of the show (and the building), Pak Sheung Chuen’s pitch-black room Travel Without Visual Experience, 2010, is inserted, organising the spaces around it with some sense of symmetrical progression into and out of this core.

Pak Sheung Chuen’s work also became the most effective arbiter of the theme of the show. The Chinese artist travelled with a tour group to Malaysia, keeping his eyes closed or covered for the whole trip. The artist has stated that he will never step foot in Malaysia again, so the photographs and videos taken by his companions on the tour and his own “blind” images have become his only visual memories. In a further elaboration of the concept, these photographs are displayed within this lightless room and the audience is advised to view the works by taking their own flash photographs within the space. This complex piece, which might have collapsed under the weight of its multiple storylines, manages to keep them all in play, creating a rather brilliant experience of the process of creation and reception of the work.

Leaving things in doubt surely produces some of the most interesting artistic activity, but this show adopts a somewhat controlled approach to the subject. Despite a good selection of artists and works and some interesting installations, the curatorial premise seems misplaced, in the process reducing the power of the art.