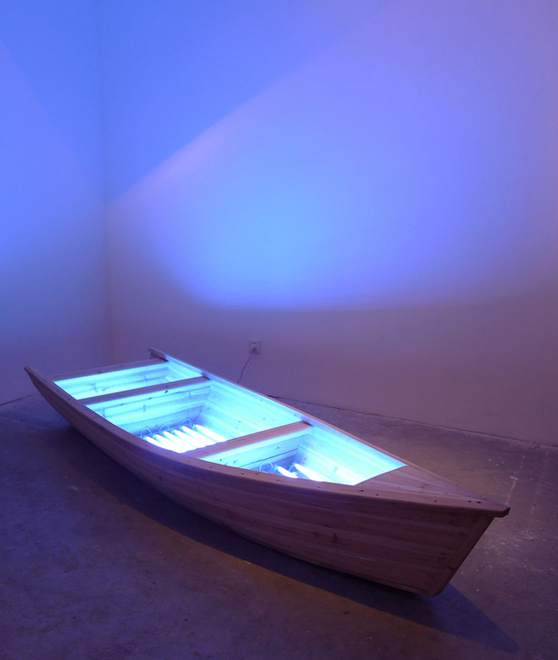 Entering the contested islands of the South China Sea, artist Xu Qu plays with the disjunction between the hopes and wishes that the territory embodies as well as the reality of the places and their constitutive activities.

Looking back over some recent presentations helps to give some background. One of Xu Qu’s contributions to Beijing’s Taikang Space and their 51m2 series, was Upstream (2010–2011) a project tracing the Liangma River from where it passed the artist’s home in the East of Beijing, to the Houhai Lake in the centre of Beijing. Wherever possible the artist and his collaborator followed the canals and waterways, but in many cases this system is in disrepair, or incomplete, forcing them to drag their inflatable dingy out of its element and through the busy ground level streets of the capital.

This fanciful route expressed a simple desire to see where the river went. The commitment to such an activity by the artist presented the city from an alternative angle, a parallel area overlooked by everyday life.

In Smile, Hemuse Gallery’s group show that Iona Whittaker reviewed on this site, Xu Qu was represented by The Beauty of Distance, a single-channel video work documenting another quixotic action. This began with the artist throwing a large ball of string out of his apartment window. After retrieving it from the ground floor, he brings it back up to the apartment via the stairwell. The two ends are then tied together, forming one unbroken loop of string, from inside to outside and back again, tracing a ring around and through the building. 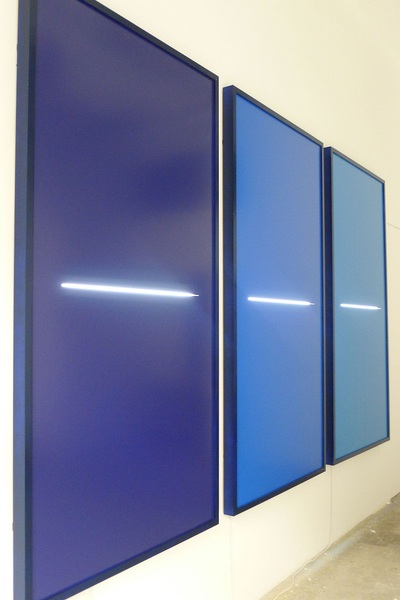 In this current solo show, Xu Qu has taken this distinctive approach to the meaning of the structures around us to a more remote site with far larger political significance. The South China Sea is an area where the territorial interests of many countries collide and overlap. Although apparently not an easy task, Xu Qu gained access to one of the small coral islands to perform these new works, playing with the islands physical status as a temporary coral platform and its desired status as permanent territory.

In the representations of the island in these works, there is an undercurrent of romanticism that seems to counteract the political issues trying to define them. A lone boat sits on the floor of the gallery, its finely-crafted wooden structure suggesting a practical vessel, but lines of blue neon fill its floor, distracting from a literal reading of the boat. On the wall next to this, three panels in various shades of deep blue are cut midway by a horizontal gap through which a white neon tube shines.

These two works seem to present a vision of the sea as invisible but ever-present for these objects. The blue panels can be read as images of the sea and sky with no demarcation but the bright line of the “horizon”; the boat is built for the sea, implying it in its structure, but in a touch of pathos the “water” seems to have invaded the boat, threatening to capsize it in its bright neon light. 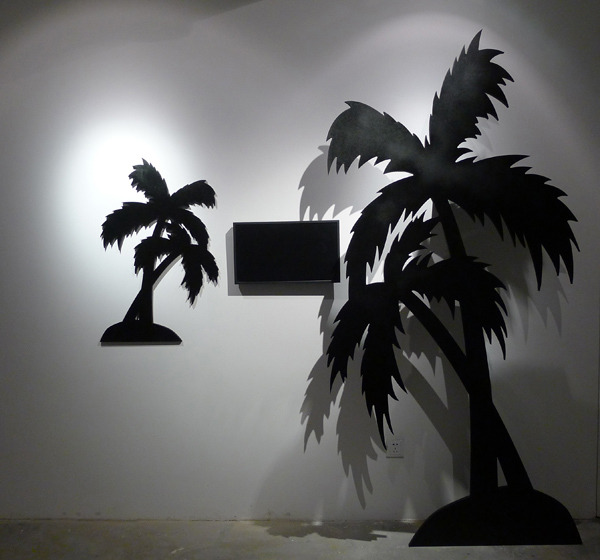 The coconut palm, the cliché of the tropical island, is used several times in other works. In one case wooden cutouts of the palm’s silhouette are used as an informal frame for the video Coconut Graveyard. This documents the wholly artificial grove of palms on the island that, in a strange tradition, have been planted over the years by visiting Chinese dignitaries to record their visits. The palms are all decorated with plaques with the VIP’s name. Planting the trees seems to represent a certain kind of territorial act by the visitors, asserting their nations presence. But these trees provide a link back to the human face of these claims: although the palms are doing well, “What about the people who planted them?” asks the artist.

In Coral Reef (2011) Xu Qu asserts his own opinions on the permanence of these islands and the concept of territorial claims. He is seen collecting coral from the shore and throwing it back into the sea to the point of exhaustion. In this futile way he is here fighting against man, somehow completing nature’s task of entropy, by encouraging the process of the island’s dissolution.

These pieces present a rather wonderful reaction to the situation the artist finds himself in, and with the situation that the islands represent. His responses to the competing natures of the claims, and the physical nature of the island as a temporary coral reef, are measured and considerate. Compared to the earlier pieces that I mentioned, the serious implications of these territorial claims seem to have left the artist more muted in his responses. Nevertheless, his humour in the face of absurd situations still shows through in the romanticism of these pieces.