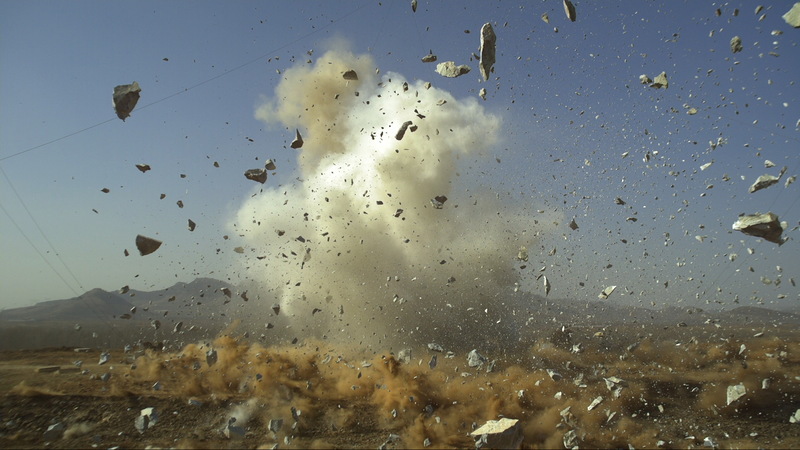 In what might be read as a change in direction for Zhan Wang, the new large-scale installation at UCCA broadens his works’ outlook from the establishment of monuments to the creation of the universe as creative material. In the process, the artist addresses some big questions about our place in the universe, but ultimately manages to lose his sympathetic connection with the human body.

His long-running Artificial Rock series of scholars’ rocks recreated in stainless steel now dot the world, playing with the role of the monumental in public space. Critic Huang Du sees them as existing between tradition and modernity, and these contemporary versions of the traditional stones literally and symbolically reflect the appearance of whatever is around them in their polished forms. But this trope has now become ubiquitous, almost a cliché, so how does the artist progress? 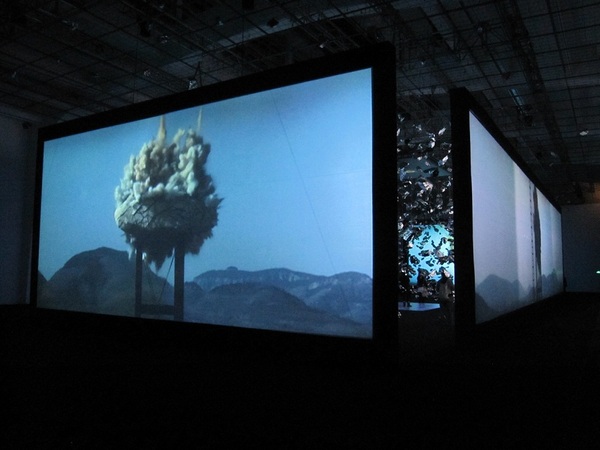 Zhan Wang, My Personal Universe, video and stainless steal; Courtesy of the artist and Ullens Center for Contemporary Art.

My Personal Universe, the installation occupying UCCA’s “Big Space,” is perhaps his answer. Four huge screens (with two more serving as floor and ceiling) demarcate the space. On these are projected films of a large rock sitting on a scaffolding structure in a barren landscape; each screen presenting the face of the rock based on their orientation in the room. Every three minutes this rock explodes into fragments that fly out in all directions in super slow motion. This film is reflected on the surfaces of some 5000 stainless steel rocks, created from the fragments of the explosion. The fragments hang on wires throughout the space as a forest of shiny forms that intermittently block the view of the film and which the audience must negotiate within the space.

This installation seems to be moving away from the nature of the rocks as coherent objects of contemplation in the tradition of these scholars’ rocks; the Artificial Rock now explodes into fragments that must be considered en masse. The final rocks -- their destructive creation and arrangement, come to represent the theoretical act of formation, encompassing the long-history of their making back to the Big Bang.

This installation looks beyond the cultural manifestations of the monument in space as well as marks a distinct turning point of meaning of the works’ relation to the body. In the past Zhan Wang’s stones have referenced a healing aspect of the objects, at times related to religious beliefs. Several projects have served to fill gaps: New Plan to Fill the Sky, 2001, in which the artist planned to return a stainless-steel copy of a meteor back to space; and, Project to Inlay the Great Wall, 2001, which recreated a missing part of the Great Wall in steel bricks. In his major solo show at the National Art Museum of China in 2008, Zhan Wang also presented the installation Deity Medicine, in which large stainless-steel pills were propped around the room incorporating ATMs on which the audience could research various deities (ATM Deity Search Engine 2008). 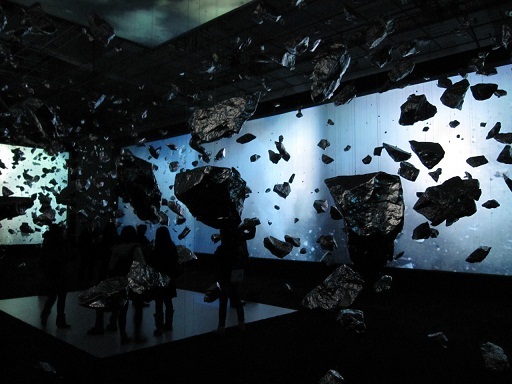 However, technical issues with the installation at UCCA left me unimpressed with the results. For a start, the precision of the hanging stones marked a jarring contrast with the fuzziness of the filmed footage. Despite their HD quality, the films were projected so large, and the audience was able to approach them so closely that the perceived quality of the image suffered badly. On top of this, the large gaps between the edges of the projections (through which the audience can walk from the outside to the inside spaces of the installation) disconnect each video segment from each other, preventing a wholistic experience of the space of the explosion event.

On the other hand, the “making of” documentary in the adjoining room (directed by Richard Widmer) provides a counterpoint to the installation, bringing back a human dimension and rendering evident the trials inherent in producing such an event.

Considering the installation as a whole, this show reiterates the fact that UCCA’s Big Space remains difficult for monolithic presentations. While to be chosen to work with this space is something of an accolade, the sheer immensity of the room, which should be seen as an opportunity, is often too much of a temptation to produce overblown pieces. In this case Zhan Wang’s response is let down by pushing the installation beyond its technical possibilities. I also feel the treatment of the subject matter prevents the audience from truly engaging with the artist’s world-view as presented in this installation.