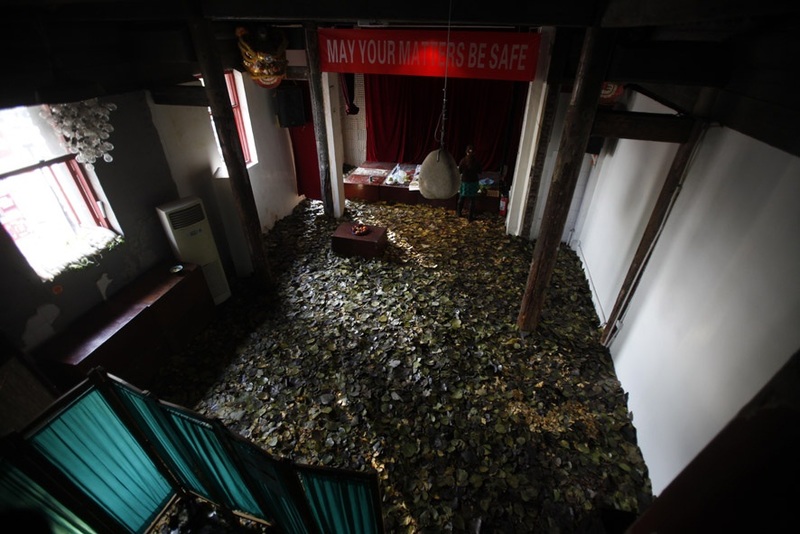 Not Only A Taoist Troublemaker! was a short-lived exhibition occupying a leaf-strewn room in a small arts space attached to a bar. A bar with a vegetable market behind; sharing a building that housed a screw factory during the Cultural Revolution. A screw factory built inside a Taoist temple, replacing the site’s original Buddhist temple. This overlapping of every kind of ideology provided an ideal backdrop for the six artists’ work in this show curated by forget art.

forget art is an organisation created by artist Ma Yongfeng, about whose “guerrilla” tactics I have written once before on ArtSlant. It has become well-known for the ironic nature of its exhibitions, interventions, and projects. These activities are keenly self-aware of their contexts, and never take themselves too seriously.

Prior to the opening of this new show, Ma Yongfeng had already laid the conceptual and experiential groundwork by initiating a series of “naked” interviews with the artists and academics. Ma’s aims seem to be, on the one hand, to provide a forum for the sort of serious discussion that he feels is lacking in the art environment in China. On the other, by performing au naturel he is pushing the situation out of kilter. The participants’ exposure may lead to a more open discussion – at the very least it places the speakers in a new, less comfortable position. 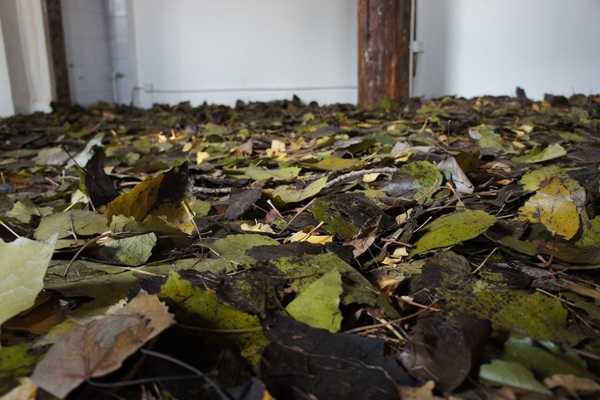 This was also his reasoning behind collecting twenty bags of autumn leaves from a forest in Beijing’s outskirts and transporting them into the gallery. This literal groundwork had the benefit of pulling the whole space together with its softness underfoot and the earthy smell that it brought to the space. Ma explained to me that this was beyond simply an intervention – it was an effort to create an atmosphere or even some kind of aura. 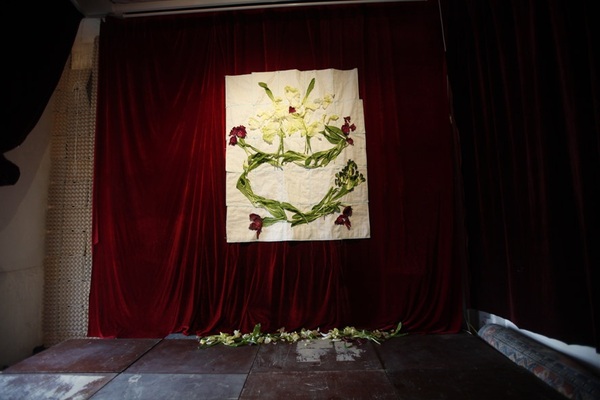 Picking up on this, Liang Ban’s carved radishes rested on an open window-sill and Hu Xiaoxiao’s failed (in a good way) image made of vegetable matter hung in place of honour against a plush red velvet curtain at the back a small stage. The radishes were clumsily carved with figures, as if these were nascent within the vegetables, awaiting their revelation; and the backdrop hung where a Buddha figure or Christian cross would normally be situated, spot-lit on the raised stage, at the focal point of the room. Counteracting any particular readings, a smartly-dressed woman hired by artist Lu Zhengyuan performed as an unreliable guide to the show, providing background to the works with guesswork and rumours, creating an atmosphere of misunderstandings for her audience.

Hanging above the stage, Alessandro Rolandi’s red propaganda banner announced, “MAY YOUR MATTERS BE SAFE.” This statement is typical of the ambiguous situations in his work, subtly raising its issues with reality. These words overlooked and seemed to ironically relate to Wu Yuren’s large rock suspended from the ancient rafters. For the opening, Wu stood under this 200lb stone, forcing himself to remain in this precarious position. While perhaps not long enough to privilege this activity as “durational,” he was stationary long enough for a call of nature to be performed amongst the leaves – I have to recognise this as (some sort of) commitment to the (in)activity. In discussion with the curator and audience, he finished the piece by removing his clothes and standing naked under his stone – disrobing again appearing as a means of expression with its parallels to the online response to Ai Weiwei’s charges of pornography (although Ma Yongfeng’s original naked interviews antedated this particular meme). 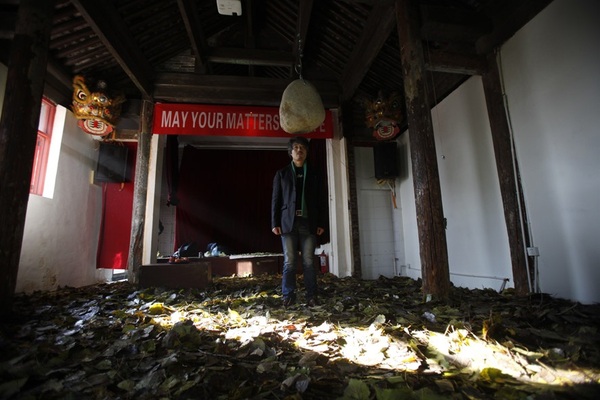 Performance by Wu Yuren, Work by Ma Yongfeng, Not Only A Taoist Troublemaker! installation view; Photo by Edward Sanderson

I don’t want to sound dismissive of Wu Yuren’s activity, however, as it had a deeper rationale than its surface appearance might suggest. In 2010 Wu was jailed for ten months under questionable circumstances and since his release has intermittently been called in for “a cup of tea” by the authorities (as questioning is euphemistically referred to). This serious and continual pressure on him is expressed through this work.

Whether that makes it a “good” work, I am not sure; my immediate reaction was that I did not like it, even with the background, feeling it was too literal and unsubtle. But I have to respect the fact that it reflects Wu Yuren’s being on the blunt end of the system, and that aspects of his situation are more common than one might expect. He has more right than most to comment on this experience, and of course I do not know what it is like to live through his experience or what it is like to be under this continual pressure. The activity was all done in seemingly good spirits – one way to deal with such serious matters, perhaps.

This attitude was reflected in the original Chinese title of the show, “不是吃素的” or “not a vegetarian,” a euphemism for not being a push-over, which the curator described as presenting “a very simple, radical attitude.” The English title refers to the Bohemian reputation of Taoists, saying that this show is not “only” about that, in a typically open move.

Although it is obvious I had many reservations about this show, maybe because of those reservations I still felt this was a powerful exhibition that did manage to create a strong impression on me due to at least in part to its scattershot nature.