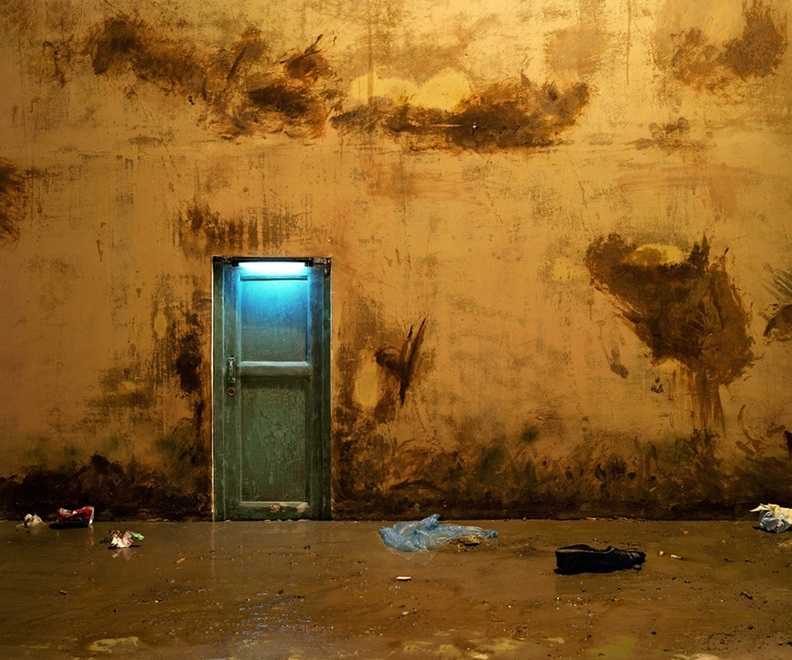 Beyond the Door that is Often Kept Closed

Last Sunday the brand-new, oddly-named ‘Hemuse’ gallery drew a crowd to its first exhibition with works by six young artists, one collective and hotpot snacks in the Pinguo development in Beijing’s business district.

The exhibition’s title is ’Smile,’ enlisted both for its resonance as a filmic device conveying at the same time pathos and sweetness, and also as a sardonic, pseudo-amicable response to the societal contradictions highlighted in Chaplin’s Modern Age. But, as the curator notes rather sweetly in writing, ‘back to the exhibition’: it’s hoped that these fresh works will also offer a counterpoint to the squeezed, sweeping society in which we live now.

It is a show of valid beginnings including the good, the not bad and the forgettable. The last of these three came in the shape of Li Jinghu’s Fireworks (2011) installation, for which a series of different-sized circular canvases had been given round blobs of acrylic paint grazed on with a disc sander. Opposite this on the wall was a video piece by Xu Qu called The Beauty of Distance (2011), in which the artist had tied the end of a ball of string to an apartment window and thrown it out to retrieve at the bottom of the neighbouring building, take up to the corresponding floor and retie there to make a link. Some might find this derivative or somewhat facile, but its image in relation to Beijing’s accumulation of apartment towers was not an empty one.

One next climbs the stairs around the top walls of which is projected a journey of 10 hours 20 minutes (the work’s title) on Google Earth by Zhang Moyi (2011). One feels this idea was thought up by someone with an astute eye to the fusion of online functions with the status and experience of life in the present moment. The execution of the video, however, with the Google logo floating slightly awkwardly still, rather let it down. 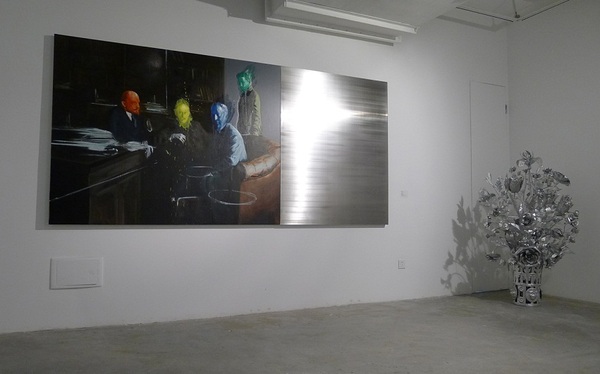 The strongest work was certainly to be found on the first floor. The first area here is shared by the Rogue Art Team’s painting + metal sheet piece Hard Candy (2011) and a series of three beautiful Giclee prints by Miao Ying (2008-2011). The prints show devices, for example a USB drive and an analog connection, rendered in large format so that the artificial details of corrosion and thread-wires are visible.  These prints conjure strangely compelling pictorial monuments from minor electrical bits and in tandem with references to the ambivalent layers of games like Second Life contribute to our own existence and visual repertoire.

The final room contains works by Chen Wei in the form of two photographic prints and a modest installation of a chair standing on a rug with four illuminated light bulbs at its feet. The prints were very nicely presented, their evocative but imprecise titles – Entrance of the Garden and The Door that is Often Kept Closed (both 2009) suggesting outlying presence of a narrative. Their staged scenes with lurid-poetic urban lighting are attractive, with a filmic quality. Finally, on the opposite wall, Su Wenxiang had placed a photograph of himself clutching a bunch of flowers outside an historic set of buildings beside a case containing those flowers as if like documents of the performance, lying side by side, one by one. One would have liked in this case to know what the nature of the performance had been and its premise, but this was left untold.