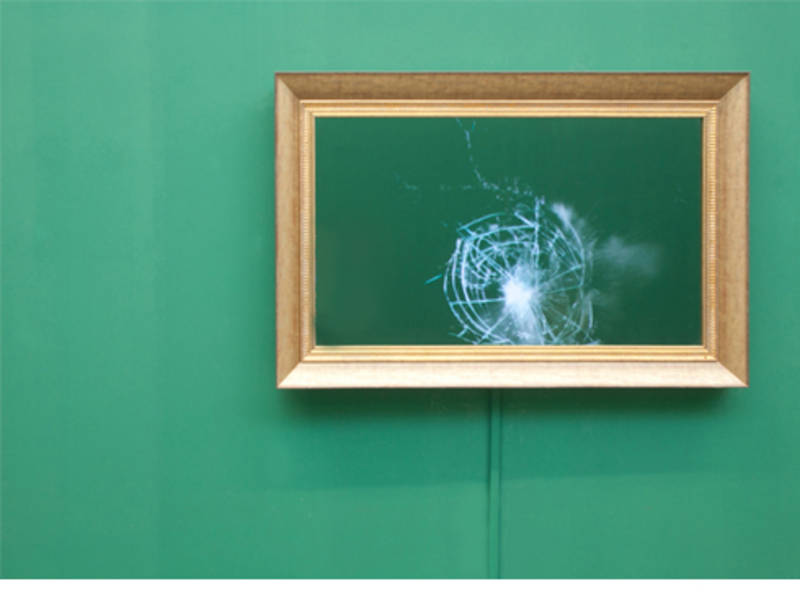 Lee Yongbaek: Angelus Novus at Pin Gallery was the pick of the exhibitions that I saw in Beijing on my afternoon at 798. Lee Yongbaek was chosen for the Korean Pavillion at the 54th Venice Biennale in 2011. And as I understand it, Angelus Novus is a version of the works he presented in Venice.

Lee Yongbaek’s work fulfills my two essential criteria for art worth spending time with. First it is a truly multi-media exhibition in which he pushes at the boundaries of each medium, photography, video installation, installation, sculpture. And second, Lee’s work is a searing political critique of institutions which might ordinarily claim to be at opposite ends of the political spectrum, but that Lee demonstrates with conviction, are in fact, in cahoots. The art gallery and museum are as much a target of his work as are the military and the government behind it.

I can’t remember the last time I saw an exhibition that was both frightening in the levels of violence it represented and critiqued as well as mesmerizingly beautiful in its aesthetic. For me the most terrifying and powerful pieces were found in the Broken Mirror series in which the frames of old master paintings contain video screens made to be mirrors. As we stand before the “images” which are really reflections of ourselves, we hear shots fired on a soundtrack that fills the surrounding gallery spaces. We “see” a bullet hit the glass mirror, thus our image, and with it the certainty of our identity, our vision, our self-understanding, shatters. Alternatively, as we attempt to contemplate the reflected image of a frame on the opposite wall, the “painting” is violently shot and this time, our reverence for art and the institutions that enable it are smashed. Then the image dissolves back into the dark, deep expanse of a mirror with nothing to reflect. The Broken Mirror series attacks the experience of art at every level: it assaults the visual and aural senses of the viewer, the art works on display, the institutions that exhibit them. There is nothing redemptive to hold on to in these shocking works.

In another series (I refer to them as series but they are not serial in any way) Lee depicts pietas either destroying their casts or holding a repetition of themselves, tenderly as the Virgin once held Jesus. Obviously, psychoanalytical critics will have a lot to say about Lee’s work thanks to its persistent discourse of destruction as a simultaneous variation on self-destruction, self-hatred, self-immolation and the smashing of all pretenses of the art institution. Not to mention the engagement with religion that is surely invoked through the reiteration in plastic of the pieta as genre. 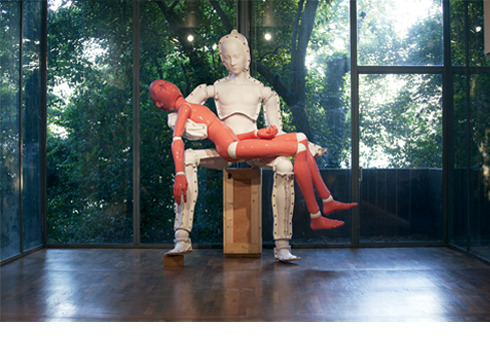 His ability to conjoin self-violence with that of the most public of institutions is another level on which Lee’s work speaks to the urgency of art as socially and culturally responsible, or in this case, irresponsible. In one work a Pieta strangling its cast, having already dismembered it, is literally trapped by giant stainless rods, each one of which has the name of a prominent world art museum on its handle: Pompidou, Tate, Stedelijk, Minsheng and so on. And at the end of each rod, a letter of the alphabet contributes to a collection of letters that spell out the title of the piece: This is Art (2011). The rods with letters immediately reminded me of charcoaled fire pokers; they left no way out for the self already entrapped and crippled by its Self-Hatred.

In the opening two rooms of the immense Pin gallery, images of soldiers wearing fatigues camouflaged in flowers hang from the ceiling and stalk the space. Tropical rainforest birds sing sweetly making the experience of this apparently peaceful environment one of enchantment. This is until we spend time in the space and it sinks in that the soldiers are carrying rifles, and that they’re hanging from the ceiling. Suddenly, the singing birds create claustrophobia and nausea. Each soldier had a name tag, as soldiers do. But their names were disturbing: they carried the names of famous film directors, actors and celebrities. These sculptures are the angels of the exhibition title, Angel Soldiers, and are then repeated in oversized C-prints, and again, in a single channel video in which they move in slow motion through a desert of flowers, their rifles appearing every now and then. In the same way that Lee denies any refuge from the institutional forces that crucify the individual in the Broken Mirror and Pieta series, in Angel Soldiers, flowers are no haven from the attack of and by soldiers at war. The subversion of ordinarily distinct and oppositional icons is not only unsettling, but here, it is frightening. 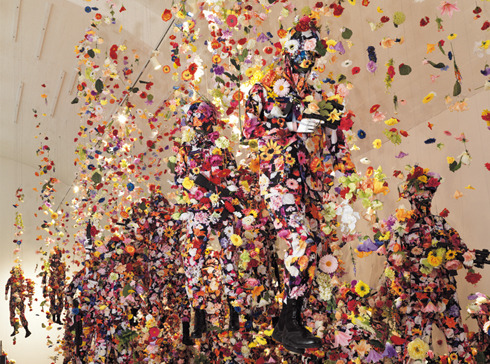 Lee’s work is further complicated by its address of the political situation in Korea, and of course, by the process of setting this in relationship to all the other discourses that run through the exhibition. I am not able to speak with any authority on Korea, but it’s clear that an artist who is entwining discourses on the self, the military, the art institution, nature, and technology, has his own identity as the pivot around which these all turn. And let’s not forget, Lee’s is not a world where artistic creativity can be celebrated with any optimism.

--Frances Guerin, a writer and film-historian living in Paris.