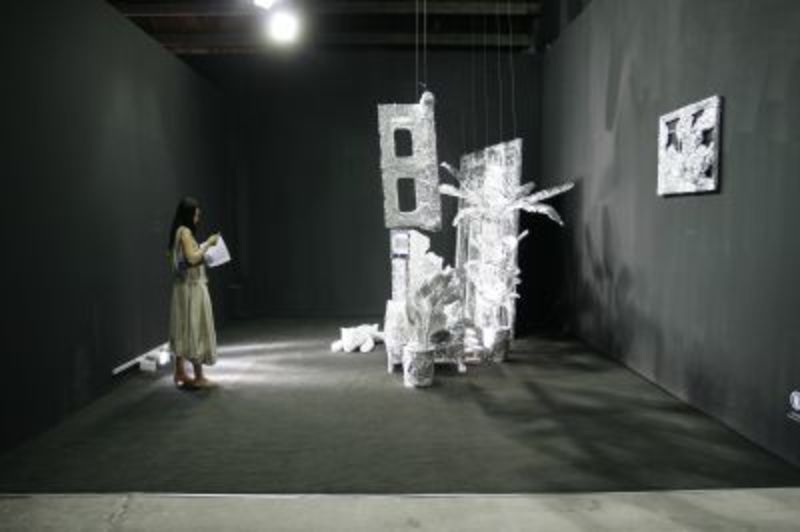 Curated by LEAP Editor Philip Tinari and featuring big name artists Yang Fudong, Wu Shanzhuan and Geng Jianyi, ‘Waterworks’ was an eagerly-awaited exhibition, part of the cluster of openings at M50 just before SH Contemporary. The exhibition’s title is born of an unrealised installation by Geng Jianyi from 1987 called Tap Water Factory.

For the current show, water is enlisted as the starting-point for the works of the three artists, all of which in some way link to the idea of water as a core substance, and to its ‘manipulation by human structures.’ Tinari’s introduction is frank in saying that this connection to water occurs on the most basic level; those expecting an exhibition of works ostensibly focused on water would be disappointed. 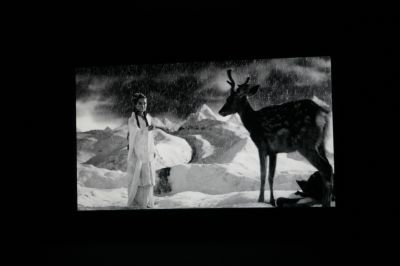 The right side of the gallery is given over to Yang Fudong’s work. There is a black box screening theatre and an adjacent room, two walls of which are lined with coloured paintings and light boxes documenting the process of conception and creation of the film, entitled The Nightman Cometh. Made this year, the film’s loose, wordless thread follows four characters in a snowy landscape at night – two women, a general with a horse and a young man. They wander aimlessly, sometimes attentive or wistful, sometimes fascinated by such animals as deer or pheasants; a rich string soundtrack heightens the atmosphere, the visual architecture of which follows the model of previous film works by the artist: smooth, highly finished and black and white. It is interesting to see the paintings and film extracts –Yang’s work on paper is seldom shown -- but their positioning around the walls of the room was remarked on by some as surplus to requirements for the impact of his work, particularly against the seductive display of the finished film and its music.

The 420 small drawings by Wu Shanzhuan mounted en masse at the back of the gallery against a slightly curved wall are not easily assimilated. Ranging in date from 1992 to the present, their premise is sparely described – they play on a mythical ‘Butterfrog’ character which conflates the butterfly and breast strokes and which is employed to look at the principles of ‘rotation and recovery’ which Wu and his partner draw from ten years of conceptual engagement with swimming. The project has its origins in an ongoing project called ‘Today No Water.’ Individually, the drawings are oddly amusing, combining as they do images roughly like genitalia rendered in a swift, expressive style with pretenses to diagram and with snatches of text. Wu’s is a substantial, satirical vision – a great pool of variations on a visual and conceptual theme - with its origins in his avant-garde practice during the 1980s; he is noted as being the first Chinese artist to incorporate text into his work. 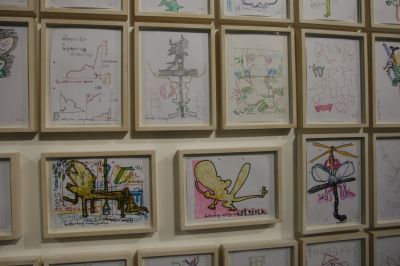 Geng Jianyi’s piece is called The Content is Disturbed by its Shadow; it explores notions of inside and outside – outside is a mise-en-scène of furniture covered completely in tin foil; inside is a blacked-out room. There is a pin-hole camera cut in the wall which allows a vague upside-down image of the furniture scene to rise into view – if the viewer is patient enough – on the wall. A small bubble-blowing machine rotates past the pinhole camera, distorting its image with liquid. This is arguably the strongest installation in the exhibition because in a sensory way what the artist sees as the difficulties inherent in the transmission of ideas into China from beyond its boundaries. The Content is Disturbed by its Shadow is also the installation which most clearly and, at the same time, subtly, connects with the theme of water. The reference is particularly delicate because it lies in the sensation and metaphor it achieves – the pinhole camera image does ‘swim’ into view, and comes towards the viewer out of the darkness of a space into which they must plunge unnervingly and which submerges their senses, as if at a great depth. The murky image on the wall is dappled and rippling – fluid in itself. The other two installations do not, at the outset, bear such a sensitive relationship to the theme.

The link between Wu Shanzhuan’s series of pictures and water is clear in that certain swimming strokes form the basis of his pseudo-diagrams that in turn speak of the philosophical and satirical avenues he explores. The exhibition text gives no indication as to how Yang Fudong’s film and documentation can literally be assimilated to the idea of water or man’s manipulation of it. But here arises an idea: that perhaps it is in the interpretation of the work – not in its content – that the idea of fluidity really occurs. One can approach Yang’s filmic landscapes in an abstract way, seeing them as liquid in terms of time and sequence, flowing endlessly and without a solid narrative structure.

Based on this approach and non-solid reading of the theme, to accept each work in ‘Waterworks’ as connected to water in different ways becomes more viable and fulfilling.

(Image courtesy of ShanghART and the artists.)