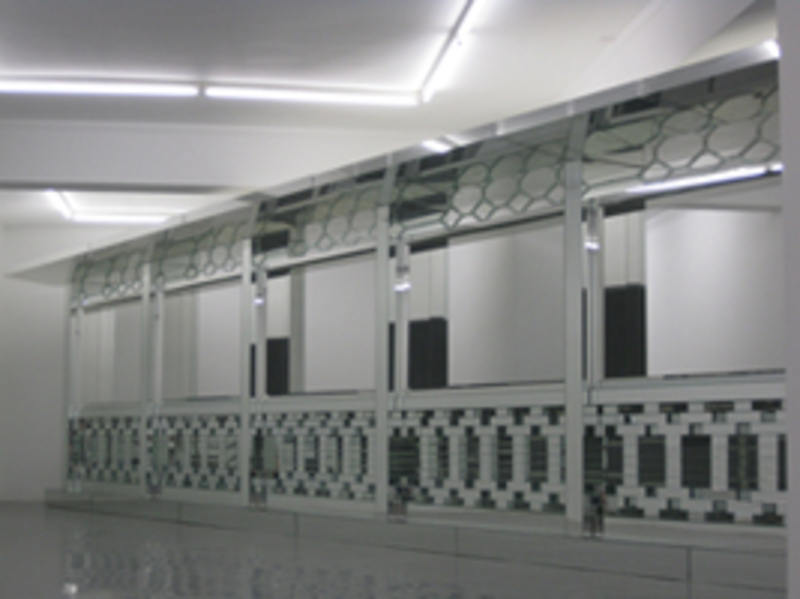 Lions and Tigers and Mirrors Oh My!

For what is obviously such a large and weighty intervention, the mirrored surfaces of Wang Wei’s Propaganda Pavilion create an almost insubstantial structure as it cuts diagonally across Boers-Li’s upstairs gallery, disrupting the visitors’ procession and views through the spaces. The Pavilion is a reconstruction of a common form of display structure, with suggestions of Socialist architecture in its original forms.  In this case, the artist has taken an example from Beijing Zoo.  As presented by the artist, completely cocooned in mirrored glass, the display apparatus facets and disrupts, diaphanous in its physicality and difficult to pin down.

Behind this Pavilion and visible through the gaps in its four sections, is a single painted panel-- a direct copy of those that fill the original structure. This painting includes three images that are divided between the panel and a series of thin fins attached to it at right angles. This creates a simple animation as the image changes depending on your viewpoint. Standing to the left, you see a roaring tiger against a night sky and, standing to the right, a pair of lemur-like creatures on a branch in a forest – fairly innocuous natural history illustrations.  When facing the painting straight on, the characters 小知识 (XiaoZhiShi) appear, meaning “a little knowledge,” “Do you know?”, or even (the artist tells me), “Why?”. This is all presented as it is in the zoo from where they came, but removed from that context, the panel encourages wider interpretations. Since taking part in the influential Post-Sense Sensibility: Alien Bodies and Delusion show curated by Qiu Zhijie and Wu Meichun in Beijing in 1999, Wang Wei’s work has moved away from an overt performance of the body by the artist, towards an engagement with his audience. He now seems to be working with a body that is missing in relation to the constructed environment, or one that the audience supplies, and the constructed environment’s reciprocal effect on this implied presence. He presents this in both physical and social forms, but in a low-key way that belies the often ideologically-charged inspirations for the artworks (such as the bathroom in a house where Mao stayed, for the installation Historical Residence at Space Station in 2009).

As a site of forced display, the zoo seems a particularly appropriate site for such inspiration. It seems that every aspect of the zoo has become a tool to represent ideology and the pavilions become one of its modes of presentation for Wang Wei.

The literal mirroring of this Pavilion reflects a similar effect on the ends to which the artist puts it. While never quite losing the original expectation of the form as a site for the presentation of knowledge, this transmutation of material (as well as its transposition into the gallery) somehow idealises this particular Pavilion as a type; its act of situated-ness within the gallery or the original site is called into question; its function and meaning hang in balance.

There seem to be two factors at play here in the artist’s works that undertake a similar methodology: a change in situation (which can be a process of change, rather than the change as end in itself) and a change in material. Both act to subvert the existing meanings that have become rooted to their spots as solid architecture. With this connection to the world they become unquestionable in some way, as situated objects that represent a set of assumptions that may be missed in their original settings that act to naturalise them. It seems to me that one of the risks the Pavilion faces is that it will ultimately efface itself as a holder of any particular meaning, content to rest in an ambiguous position in relation with the world as it disrupts the viewer’s presence in the gallery with its mirrored surfaces. A comparison could also be made to the development of ideology itself, an incarnation of the power-structures and influences around us, and the way that it seeks to normalise itself into invisibility. This induced forgetfulness is something Wang Wei’s work attempts to foreground and interrupt in subtle ways.

Wang Wei’s works “lift” elements, adjust and relocate them.  The audience is brought up against their physical relationship to the works, as well as their own understanding of the elements in their original setting.  These sit behind the work like ghosted images, yet are usurped by the current version which draws attention to its fresh setting as equally formative of a new set of meanings. This action harks back to Duchamp's "rectified" readymades, where the original is altered to highlight a particular idea latent in the object. This layering of the construction of meaning causes a continual shuffling between the images and their meanings, creating a playful relationship similar to that of a theme-park’s structures.  They become fantastical in their relation to the world while remaining real interventions with their own effects.

(All images courtesy of Boers-Li Gallery and the artist.)