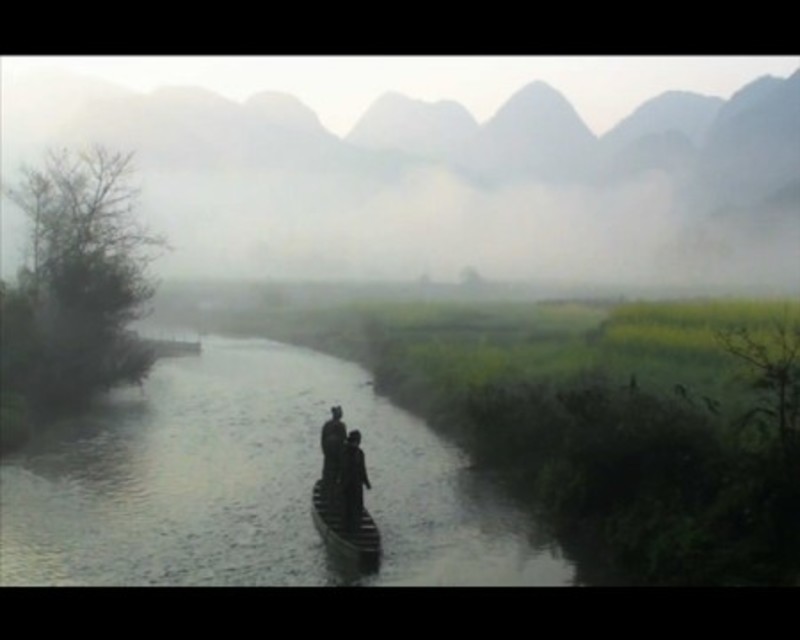 In 2010, on a side street behind the main drag of 798, the German appliance company Siemens opened a small art space as part of their mission to “finance young artists’ projects and provide community service around China.” As part of this worthy cause, this month the gallery is hosting Overstep, a show of two young Chinese artists, Shen Yi Elsie and Lei Benben, curated by Pi Li (Director of Boers-Li Gallery).

Over the past few years both Shen Yi Elsie and Lei Benben have moved from photographic works to a more expansive approach to media – in Lei’s case into video and for Shen a practice that has developed through video into public interventions. For Pi Li, their work “oversteps” discredited boundaries of objectivity, fragmenting narrative into disjointed personal histories, creating a situation he characterises as “the inversion of time and space, [where] reality starts to drift into illusion and no longer firmly detains us.”

The video China Utopia (2009) by Lei Benben, is constructed in three short “chapters” each presenting scenes in which preoccupied figures are placed in sensuous environments. In the first chapter, a riverbank scene bisected by a thin tree is interrupted by a man gazing out with us at the view. Stepping forward he removes his tie and drops it to the ground, but any thought that this might be a prelude to a full disrobing and leap into the water is denied as he sits to contemplate the scene. Following this, a two-part chapter begins with a view down another river into which a boat is paddled. On the boat four figures stand becoming dark shapes extending up from the boat, against the colourful, mountainous surroundings. The figures look around them, while the boat comes to rest in the middle of the river. The scene then changes to three figures in army fatigues in a cleared patch of field. They seem uncertain and walk in different directions, never coming into contact with each other. In the third and final chapter, a young urbanite wanders a bucolic wood, the ground covered with flowering plants. Sitting down against a tree he seems to doze, whereupon we are taken to a boldly coloured garden in blurred focus, where, on a traditional pavilion, a duo of characters in Chinese opera dress dance languidly.

China Utopia, while giving over a clear feeling of contemplation, perhaps suffers from the lack of direction that may be representative of this “overstepping.” In many ways the purposelessness of the characters reminds me of Yang Fudong’s work, but (as with Yang Fudong) this can become tiresome without an obvious resolution or point to the activity. Taking a look at Lei’s other works (not on show), it is clear she has an eye for the purposeful/purposeless movements of figures within landscape – for example in the short video Tuanjiehu Park from 2009, where the artist surreptitiously films people performing their personal exercise routines in the titular Beijing park, a theme which recurs in Fresh Air (2010) but with far more emphasis on non-diegetic sounds creating an idealised backing to the gestures.

In the other rooms, Shen Yi Elsie presents works produced over the past few years that move beyond her earlier photographic tableaux, bringing in a social awareness that greatly energises the pieces for me. The video work, The Neon God (2008), takes her still shots of teenage migrant labourers performing menial work, and adds light trails which animate the figures as if revealing their hidden powers through photography. The video takes the photographs a step beyond static shots by animating the scenes through fades and tracking shots.  However, I am not sure that this additional manipulation adds much more than spectacle to the photos. It may be the case that the narrativity of the photographs works well enough in its own right. 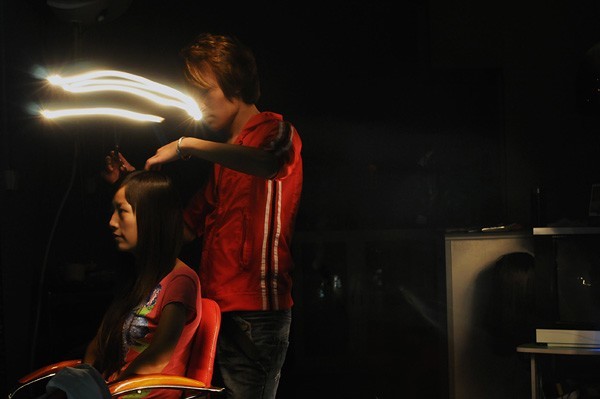 That said, this video reveals the artist’s urge to push her photography ever further, something that takes a leap in the public interactions of the Breath series.  This initial foray was in 2010 when she inserted little strips of pink paper with the Chinese characters for “Breathe” on them, into closed walnuts shells. These were then mixed with unadulterated nuts on a market stall that the artist manned. These acted like messages in a bottle, sending the artist’s little reminders of life out into the world for the public to accidentally come across, beyond the control of the artist.

Shen has taken this method further with her works in other settings.  Working in a dry cleaning establishment she inserted little folded paper objects—which she describes as “a common form of a folded letter or delivering a message in old times”—into the cleaned clothes.  On the paper is written “please breath” ready for the client to discover. Other works in this series involve the artist creating a set of small ink stamps, whose impression she applies inside of newspapers to match the existing fonts, but highlighted in red ink. She then takes on the role of delivering these adjusted papers, the additions again reminding people to breathe. A fourth piece sees the artist handwriting signs offering to teach people to breathe if they phone the number provided. These signs are pasted on walls amongst other homemade adverts, inviting strangers to contact her for this unusual service.

Each piece is presented as a vertical series of photos accompanied by examples of the artefact involved – a very important and effective way of presenting the intervention without resorting to cliché. However, one point of concern for me in these pieces is the relationship that the artist sets up with the labourers and the roles she takes on – which risks becoming patronising. The relationship between these two sections of society is an issue it is clear she is concerned with, but the focus of the pieces seems to be more on the artist performing the role of interacting with the customers, which somehow precludes the bodies of the labourer themselves.

That criticism aside, I loved the way these actions step beyond themselves and reach out to an audience that to a large extent cannot be predetermined to bias the effect.  Both Breath and The Neon God become a way for the artist to re-imagine the relationship of communication between the worker and her clients.

Pi Li, in his text for the show, describes “Overstep” as, for example, a move from “closed” to “open” narration: “from uniform to paradoxical.” This small show demonstrates the positive and negative consequences of such a move, and is a welcome demonstration of how a critical curatorial structure can productively work with its chosen set of works to leave room for questions and create something that takes them beyond themselves for the audience.

(All images courtesy of Siemens Home Applience Art Space and the artists.)