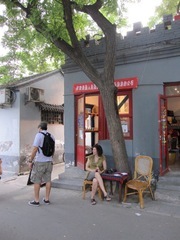 As an agent of Spectacle, tourism fulfills manufactured desires, and you can’t get more manufactured — or at least programmed — than guided tours. Tailor-made to your requirements? Maybe so, but within your tightly regimented schedule (value-for-money!) you’ll see only what you want to see. But maybe those restrictions can be put to use to provide a frame within which to re-view our understanding of the sites that we visit, through a critical engagement with the processes and assumptions of tourism.

Setting up shop for the last two months in a tiny street front space in the historic Drum and Bell Tower area (once home to Beijing’s time-keeping apparatus), American artists Stephanie Rothenberg and Dan S. Wang have been running their Journey West Travel Office. The Office has been developed as a serious business, from their initial location scouting in this strategic area, to the process of engaging salespeople, whose subsequent travails as arbiters of the various package tours to passers-by become documentary material adding to the content of the piece as a performative intervention in the area.

The four available tours are to purposefully non-mainstream locations, and include The Majesty of Parking Lots (led by Ryan Griffis, “a leading expert on the history, economics, and aesthetics of America’s parking lots”) and The Great American Test Range Tour (led by author and expert on black-ops secret bases, Trevor Paglen). The tours serve as examples of what has become known as Critical Tourism, the seeds of which were laid in the ‘90s with the writings of Lucy Lippard and the actions of groups such as Critical Art Ensemble and REPOHistory. It serves as an exposure and antidote to the exercises in power relationships and the normalisation of historical and social meaning which tourism can embody.

Although this is the first time they have worked together, Rothenberg and Wang have a shared interest in art practices that investigate modes of production and consumption, tourism being one such process. As Rothenberg puts it, it’s in the nature of tourism to be an act of “social engineering”: its accoutrements and systems working with a type of “consumer propaganda” of its promised utopian experience.

Based on their experience of China, the inspiration for the Travel Office came from the artists’ awareness of the decontextualization of many cultural factors in this place.

“…it was the whole appropriation of Western iconography or cultural signifiers that then get really disconnected, decontextualized … I wanted to open up some kind of travel agency that could bring it back to where it came from.”

The result became what they describe as a “discursive platform,” a way to engage with the passers-by and investigate these utopian visions of travel versus the reality and its actual real-world impact.

The events organized in conjunction with the Travel Office served to expand its reach into the surrounding spaces and audiences:

“Finding the store, setting it up, doing the worker interviews, coming up with the worker chant – it becomes about the production of a travel agency, an exposure of the system … It was really important to have our own 'Journey West motivational exercise and chant'! The performances were a great way to activate the space around the Office.”

I reviewed one such event on ArtSlant a few weeks ago, Something on the Way by Alessandro Rolandi and Megumi Shimizu. 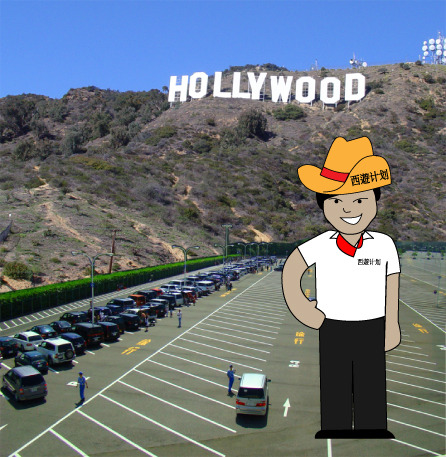 For American Independence Day, Rothenberg and Wang organized a celebration in the public square in front of the Office. On that balmy evening the square was packed with locals and tourists, with the ubiquitous rickshaws scooting through the narrow alleys showing people the sights. The celebration began with a dance routine prepared by members of the HomeShop community (a nearby artist collective) designed to mimic the pre-shift motivational chants and exercises workers are required to do. The HomeShop crew took on the role of “workers” dressed in “The Journey West” uniform of cowboy hat, red bandana necktie and company shirt. The dancers staked out their performance space, but had a tough time competing with the locals’ own line-dance groups that form every night in open spaces in China. Towards the end the locals began to edge the interlopers out a little, re-asserting their own space and imposing their own “normality” against the oddity of the Travel Office’s activities.

In the end, no sales were made, but success in these terms was, if not irrelevant, simply a side benefit of the project. During the interviews for potential sales-people, Rothenberg was advised by an MBA from the Yemen that their location may have actually worked against them in this respect, and Beijing’s business districts might be more suitable. Rothenberg came to reflect on the role of tourism in global business presence: “…big group tours nowadays are organized through companies, where they are sending their employees overseas so that they can experience and get to know other cultures – on those trips they’re interfacing with their potential clients.” 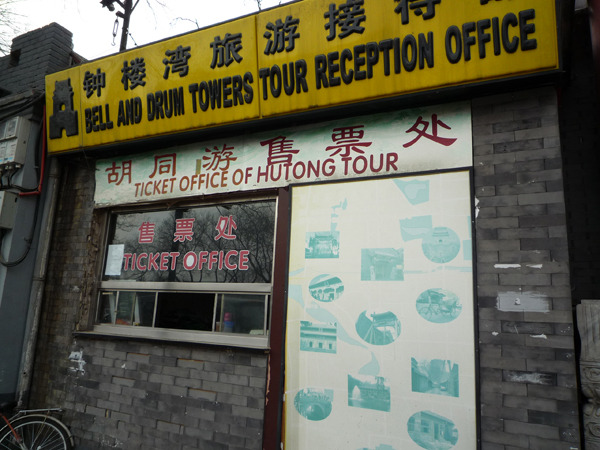 I think this investigation and response to the audiences in the area served as a point of clarification for the project as a whole. The hutong store sat within a hub of tourist activity, but tourists who were in consumption mode rather than research mode – would they want to buy another tour when they were already on holiday? For the local residents and workers the tours were usually too expensive for them to consider. But that provocation of out-of-reach realities had the productive potential to give some kind of interruption, encouraging a consideration of how could one be in a position to take part in these tours; what is the value of these tours to me; and, who are they really addressing? The process of weighing up your position in relation to the “utopian visions” of the Travel Office can perhaps open up a greater awareness and reassessment of one’s own wishes and possibilities.

Posted by ArtSlant Team on 7/24/11
Tags: travel, China, Spectacle, Tourism performance
ArtSlant has shutdown. The website is currently running in a view-only mode to allow archiving of the content.