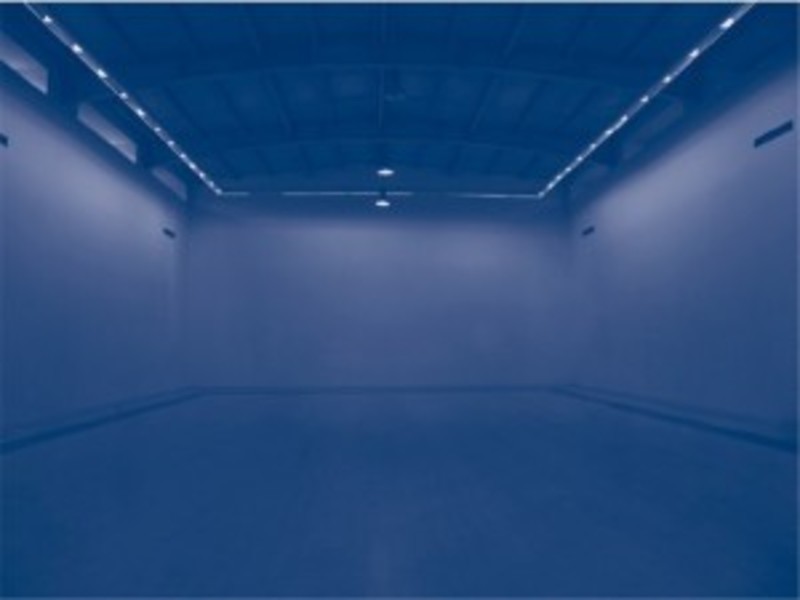 “Alibi,” the title in English of this group show at Linda Gallery in Beijing’s 798 Art District, seems so much more evocative than the Chinese title (不在场), which the essay by curator Wang Yifei translates as “Being Absent.” Although the adherence to the title seems a little weak at times, this show presents artists working with an absence of some sort. That being a very broad subject, the results take many forms and directions and overall the show brings together an interesting selection of works with some standout pieces.

Unsurprisingly, given where we are, the curator’s text does not delve too far into any of the contemporary social realities of “being absent,” describing it in general terms as “like a conspiracy, an escape or a way of self-liberation.” To me this places the focus more on an individual’s agency in the matter and less on absence as a result of outside circumstances.  The text also proposes that: “In the contemporary art field nowadays, many artists have established their independent and mature styles of expression without any limit to the subject material.” This statement seems somewhat disingenuous. The show opened on a particularly significant day, a fact that some of the exhibiting artists were obviously well aware of, but would have been unwise to attempt to deal with directly.  But there is little point dwelling on such matters, as they simply reflect the facts of working in this environment, to which I recognise I am equally beholden as I can only obliquely refer to their meaning.

Stretching across the entrance to the gallery, a long tree branch attached to the wall by a spring forces visitors to divert around or push it aside to make their entry. This piece by Yang Xinguang abstracts an experience of hiking through woods, pushing aside branches to make your way, suggesting for the curator the activity of escape from one place to another. As simple as it is, the piece has a strong effect in its evocation of the thoughtless gesture of moving through an environment far from the controlled environment of the gallery space.

Wrapping around the main wall in front of this, Liu Ren’s Searching for a sense of security is a series of thin shelves carrying around 4,000 empty eggshells, inside each of which is handwritten vocabulary from the artist’s attempts to learn English. This mass of shells arranged in their rows are overwhelming in serial nature, their combined fragility, and the sheer amount of potential learning held on their inside surface. The shells hold their information so tentatively in the emptied casings that there is always the possibility of breakage and the loss of meaning. 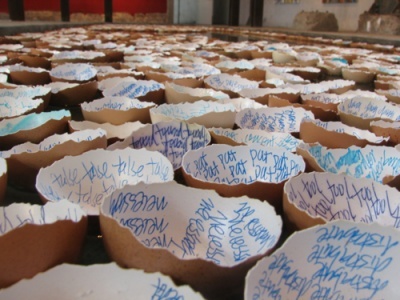 Perhaps the most literal demonstration of “Being Absent” is Li Wei’s painted outlines of bodies on the floor – as if evidence of some mass killing. Painted in mustard-coloured oil paint just prior to the opening, these took several hours to dry, with the outlines becoming increasingly vague and disturbed by the steps of the visitors. Li commented that this process reflected the fact that there are certain events for which the evidence may disappear, but the memory will not.

In amongst all this an additional structure has been built, mimicking the booths that appear in art fairs around the world. This serves as the setting for Ma Yongfeng’s forget art fair that takes place within the gallery for the duration of the show. Ma is known for his critical and irreverent approach to art institutions and in this case he has followed the conventions of the international art fair circuit and created his own distinct sales space, acting as a show within “Alibi.”  His curated show within a curated show perhaps marks the presence in their absence of curators themselves, hovering over their shows while attempting not to overshadow them (a delicate balancing act which only the best pull off).

Works inside Ma’s “fair” include the minimal white canvases of Huang Jia, who adds ridges of stitching to their featureless painted surfaces; Alessandro Rolandi’s unassuming bamboo cane made from polished stainless steel leans up against the corner of the space; and a nice work by Yang Jian of an old armchair supporting a semi-circular section of LED signage. This sign displays a continuous moving text announcing: “… Huang Lei, male, wants to leave – Chen Xiaoxia, female, wants to leave…” etc. For me this piece presented the most appropriate, sensitive and poetic response to the theme of the show. This scrolling sign arches above the absent human form in the armchair, announcing the rather sad and impotent longings of many people to simply – leave.

(All images courtesy of Linda Gallery and the arist.)

Under the Radar: Super Pop Boy | Leonard Zinovyev | Taco Eisma
1/10/19
COMMENTS (1)
I must see this!
Comment by: Linda Crispell on Friday 06/17/11 at 7:20 PM
ArtSlant has shutdown. The website is currently running in a view-only mode to allow archiving of the content.