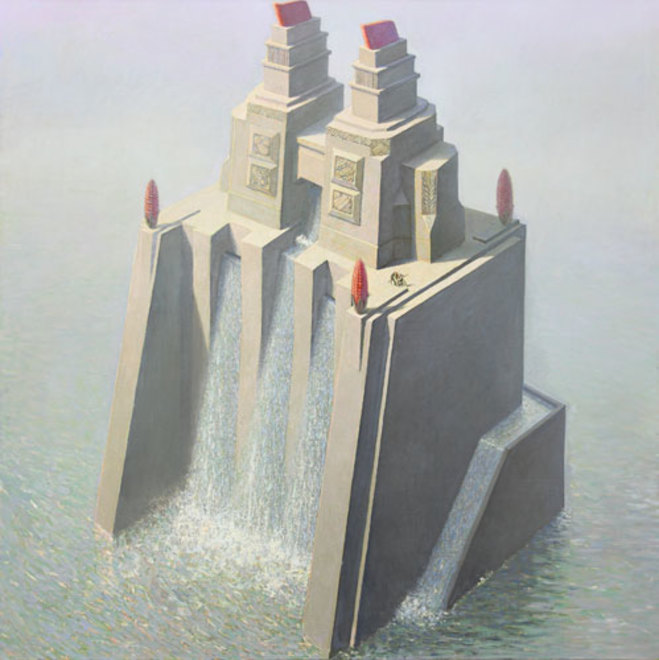 It may appear that I have something of an unhealthy obsession with Leng Lin (Director of Pace Beijing and Founder of Beijing Commune) and his activities, having now written two pieces about shows in which he has directly or indirectly been involved. Maybe this means he is doing something right, to have attracted my attention so often. That said, the reason those particular shows have caught my eye has been for negative reasons, due to a lack I’ve observed in the quality of the work or the presentation. So, although I’m reviewing a show at Beijing Commune this week, for once I will concentrate on the artists’ own work rather than the presentation or the overarching influence of Leng Lin's vision.

"Constructing Form" is a group show that presents the drawings, paintings and collages produced over the last two years by three Chinese artists—Tang Hui, Li Yousong and Ma Qiusha. The artists all deal with a human relationship to architecture, but between the three of them evince two distinct approaches to this subject matter.  It’s possible to see Tang Hui and Li Yousong as having some common ground in that they both relate the human figure to the kind of monumental heroic architecture commonly connected to a particularly Soviet aesthetic.  The pencil drawings by Tang Hui are proficiently executed, updating heroic figures from public monuments with heroicized figures drawn from the today’s population.  They are casually dressed yet effortlessly adopt their stylish looks to the purposes of the new state, posed atop pedestals against the backdrop of monumental architecture.  The oil paintings of Li Yousong, again slickly produced, present architectural fantasies and set pieces that draw inspiration from the imagery of Socialist Realism. What the gallery appropriately calls 'Baroque Socialism', again presents monumental architecture (specific parts possibly reflecting the Nanjing Yangtze River Bridge), adapted into complex follies. Although tiny figures occur within the structures performing their own miniature heroic gestures, they appear insignificant against the backdrop of overblown architecture. Overall there is little sense of practical purpose beyond monumentality for its own sake and a rejection of the human through scale and impenetrability.  This dipping into Socialist historical styles and forms give both artists a common feel. However, with their works verging on cliché there is little sense of these artists taking the material beyond an ironic nod in the direction of history.

Represented by just two mixed media works, Ma Qiusha, on the other hand, takes a different approach from the other two artists. Avoiding ironic quotations she presents somewhat unsettling architectural scenes of non-specific provenance. Her works present buildings with windows that are highlighted by small pieces of reflective plastic sheet that catch the light. Faceless figures and half-formed vehicles are drawn in front of the blank facades and seem to subvert the buildings’ latent monumentality not by humanizing them, but by providing a nether blankness all their own. 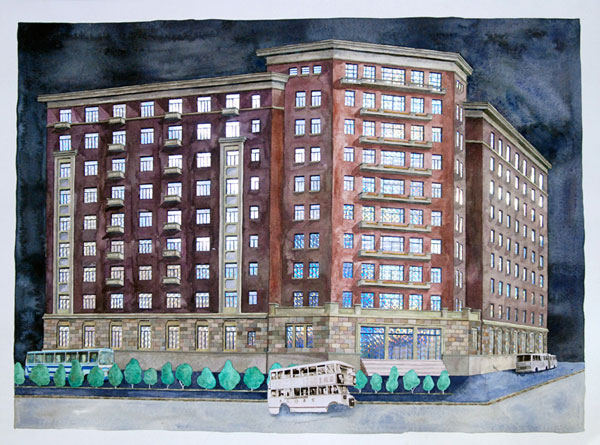 Although they are part of an ongoing series that have been present in her work for a few years now, this was the first time I had seen these watercolours in the flesh and my first impression was that they lacked the power I had come to expect from the artist's videos. They seemed far more opaque, which is not, of course, necessarily a bad thing. I believe Ma is a very strong artist who manages to navigate tricky territory with some intense and subtle video works that, while not instantly accessible, convey an immediacy that the paintings deliberately avoid.  However, the pieces in this show are obviously important to the artist as well, and it may be that this aspect of her work will simply take longer to resolve.

(All images courtesy of Beijing Commune and the artists)