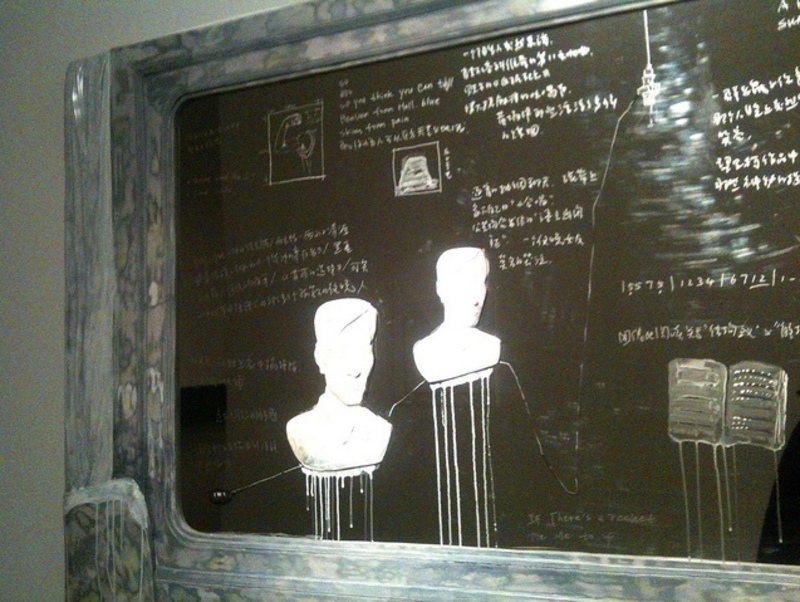 In Bed with Zhang Xiaogang

With an artist as well known as Zhang Xiaogang, it’s perhaps difficult for audience perceptions to move on from the clichés of “Chinese art” that his work has come to represent.  This issue is equally relevant for artist themselves in their quest to develop their work. Zhang’s solo show at the Today Art Museum in Beijing demonstrates the artist’s attempt to devolop and energize his signature forms.

Zhang Xiaogang’s canvases since the early 1990s have been characterized by figures in the stiff and formalized style of photographic portraiture, emphasizing a flatness of the characters and their surroundings that finds its existential parallel in reflections on memory and the recordings of history. The stiffness is visualised in views, furniture and bodies that look as if they have been pressed flat, with archaic electrical cords that strain across the pictures in stiff straight lengths and abrupt bends. On top of this are interruptions of marks and stains adding another dimension outside of the world view occupied by the figures, while still maintaining a relation to them as they drape across the forms and follow the structures like a slick of colour in which the painting soaks.

As one enters a short corridor into Today’s main exhibition hall, a mirrored surface sits on the wall catching the light and casting down reflections onto the floor over which one steps to reach the piece. The mirrored metal is scuffed and scratched in sections, and a diary-like text is handwritten over the surface. The text extends beyond the boundaries of the mirror, beginning on the wall on the left side in silver ink, etched across the metal as dulled sections, dropping back onto the wall to the right, pulling forward and backward as you follow the characters.

This form and its playing with surface and depth is continued in the main installation of the show in Today’s massive main hall. The hall is empty apart from a full-size sculpture of a bed in the centre of the room lit by a single bulb hanging from the ceiling far above. The bed is painted with the splashed and mottled forms that can be seen in many of Zhang’s more recent paintings. Another text is painted onto this installation, beginning on the floor over the bed and back down the floor on the other side as if projected from above. The bed is a double size with neatly folded quilts and pillows at one end, and the addition of a small quilt and pillow placed in the centre as if for a young child, a form echoed in a painting later in the exhibition.  The remaining feature of the installation is a band of green paint running around the perimeter of the room at about chest height.  This is another signature feature from Zhang’s paintings, evoking a sterile, institutional environment into which his figures insert their flattened lives.

In the last room are a large set of paintings and bas-reliefs demonstrating the installation as an extension of Zhang’s painted forms. Overall the subject matter has developed into a somewhat more general view of the artist’s world. In one series of paintings a motif of a train window is used to create the inside/outside relation of layering in pure paint that the relief and mirrors demonstrate in their own ways.

The low reliefs, built up on a painted picture plane that is itself on the mirrored metal, repeat the spaces in the paintings with an attempt to move beyond their flatness without denying it. These pieces’ mirrored surfaces are again scratched and scuffed, in some cases adding the written component already seen, but respecting the frame. These elements work together with the low relief to pull elements into and out of the picture plane, complicating the spaces represented.

While the artist’s investigations of various ways to expand on his successes are presented well in the generous spaces at Today Art Museum and are formally interesting in their own right, ultimately the show disappoints, as little goes beyond what we already know. Indeed, the straightforward feelings of the artist’s early works have been lost in this move to three-dimensions. These formal and material experiments, in my eyes, have little real meaning or result in any successful development in the works.

(All images courtesy of Today Art Museum and the artist.)