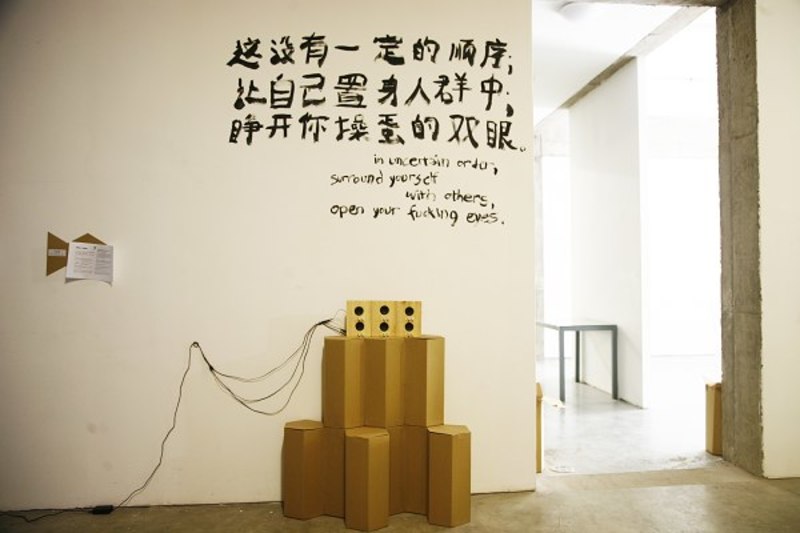 Developing quite a reputation as a space that encourages experimentation in their shows, Platform China currently has two exhibitions that, in their own way, leave some breathing space in the works and the formats of presentation – a rare and noteworthy situation within the oftentimes banal Beijing gallery environment.

The upstairs gallery of Platform’s Caochangdi space is devoted to a solo show by Jin Shan that presents the artist’s mercurial series of mini-videos "One Man's Island" as a scattered installation of monitors and projections that mark out a complex space with these recordings of the artist’s minor activities. But the focus of this review is actually downstairs, in a smaller room to one side of the entrance where a rather heartening group show has been installed that literally and theoretically opens up a space for a physical negotiation with the works on display and for discussion around them.

Curated by Beatrice Leanza, who jointly runs the Beijing-based cultural consultancy BAO Atelier, “The Third Party” is a series of shows that take principles of exhibition and curatorial practice as their basis. They attempt to promote a certain kind of critical activity that Leanza feels is lacking in the presentation of contemporary art in China. The three shows are constructed from this premise, beginning with the current “How to Be Alone (or where else am I safe from the question: why here?)." The second part will open on December 9, 2010, titled “The Stranger,” and the third part: “The Third Party” in January 2011.

Part 1, which ended this week, presented works that were chosen to serve as an investigation of the artists’ self-actualization and self-historicization. Part 2 will look at artists working amongst themselves in small groups, and Part 3 will present work that includes the audience as collaborator.  Leanza explains that “the first show features a very solipsistic, individual type of artistic practice. The second instead opens up spaces for people to participate… and the third will be more obviously related to practices of collaboration, so literally: what is it about art making when simply more people contribute to the piece.” Figuratively she represents this as a movement from “a centripetal to a centrifugal force.”

With 20 artists in the first part, and works covering many styles and forms, the exhibition is packed with material. A number of new installations have been produced for the show, including a series of Wang Wei’s signature tile pieces; a subtle trompe l'œil wall painting by Zhang Enli; and a sound installation by Elaine W. Ho. These nestle amongst the other artists’ paintings, videos, sound works, and constructions, all of which articulate the space with their materials – in one case forcing you to ascend a ladder to catch a glimpse of Liang Shuo’s installation on top of a room inserted into the gallery housing Yan Jun’s sound and site-specific work.

The forms of presentation are, of course, an integral part of the show, and a prominent feature of the installation are the many brown, hexagonal boxes scattered throughout the space. Collectively these are known as “The Beehive,” and are a storage/display system designed by Li Naihan, Leanza’s collaborator in BAO Atelier. These modular objects serve many purposes: in their basic form they provide a platform and support for the art works; when used in large architectural arrangements they helps to organize the space; and, in their projected use as part of the final show they become a container for the artists’ works or for the instructions for the works’ creation.  These honeycomb accretions will be a consistent thread passing through the whole installation, providing an important, formal reminder of the curator’s theoretical backbone.

This is a show that delicately and successfully balances theory and an experimental edge, with a presentation providing a sparkling tie that binds it all together. Leanza is a thinker whose texts offers much meat for consideration, however she is sensible to create a system which allows the show to work on a more instantly appreciable level. The Beehive provides a foil to thwart any chance that the theory could overpower, and privileges the prosaic and playful aspects of the artworks themselves, while rendering the connections between them unforced but always available.

(All images courtesy of Platform China and the artists.)

Posted by Edward Sanderson on 12/6/10
RELATED ARTICLES
COMMENTS (0)
ArtSlant has shutdown. The website is currently running in a view-only mode to allow archiving of the content.