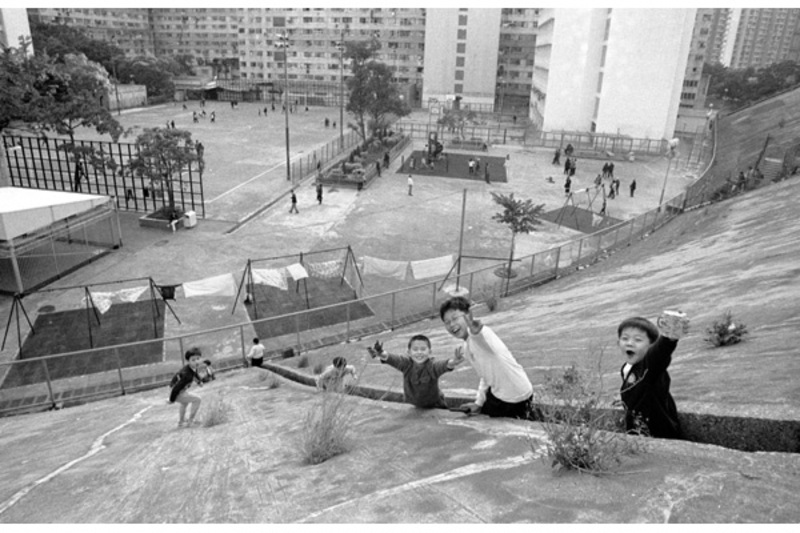 Photographs by Chan, Choy and Wolf

Curator Carl Cheng positions this group exhibition as an exercise in nostalgia, lamenting the passage of simpler times associated with the mythology of Hong Kong's first generation of public housing projects, now facing demolition in favor of buildings and estates with "better conditions in every measurable way... yet somehow colder and more alienated." At times it seems that the city's institutionally supported galleries, including 1a Space, which receives a significant portion of its funding from the Arts Development Council, exist purely to house such reminders of Hong Kong life "as it used to be," gesturing towards a quickly fading past positioned somewhere between the boom years of the 1950s and the 1980s, when mainland China began to reassert itself culturally in preparation for things to come. But while it may seem that curatorial endeavors like these (particularly at the Jockey Club Creative Arts Centre, Hulu Culture, the Heritage Museum, and Artist Commune, among others) rarely engage productively with the discourses that constitute the changes that Hong Kong continues to undergo, they do offer copious visual evidence for the thesis of atemporality in local identity, insisting on a science fiction of the past that downplays both the heritage of British rule and the Chinese future.

Ultimately, however, this is an art exhibition, and it is on the strength of the documentary images included that it will stand or fall. Eddie Chan, a photojournalist who teaches the practice at a vocational school in the industrial neighborhood of Kwun Tong, photographs scenes from the daily lives of the residents of the nearby Sau Mau Ping Estate where he grew up. These are straightforward, black and white documentary images of precisely the sort that will be included in the local newspapers and perhaps international human interest magazines upon the demolition of the housing estate in the coming months; as such, there is little to suggest that their inclusion in this exhibition is due to any inherent aesthetic value. The compositions, naturally, are perfectly competent, but there is little content of visual interest at stake beyond the anthropological questions of life in public spaces. John Choy, also a documentary photographer with a background in government work, here presents 360-degree panoramic images of life in the now-defunct Lower Ngau Tau Kok Estate. In full color, these photographs offer something more than a slice of life, but their quirky format--which remains the same from street-level landscape pieces to interior portraits--betrays an oddly cold desire to neutralize the housing estate as a single, unified field of phenomena external to the photographer himself. At his best, Choy wields a wonderfully conceptual lens, as with his "Just Another Exercise" project that somewhat fetishistically tracked down instances of natural landscape occurring within the concrete environs of urban Hong Kong, recalling Mandy Yeung's similarly monomaniacal desire to photograph street scenes devoid of people. Here, unfortunately, he recedes back into simple documentary mode. Finally, Michael Wolf continues his well-known exploration of density within the southern Chinese urban condition, appropriately now focusing on interior portraits of residents within their own domestic spaces as a counterpoint to his pixel-like renderings of skyscraper exteriors, a valuable project if only for their visual textures alone.

As usual in the Cattle Depot cluster of studios and alternative spaces, social didacticism and political correctness have robbed even the most visually stunning and aesthetically compelling work of its impact as art. There is certainly a space and quite possibly also a need for documentary photography that sensitively and intelligently explores the meaning of space and spatial arrangement within the changing environs of the public housing estates that dominate much of the Hong Kong residential fabric, but it must not remain dominated by the patronizing and utilitarian curatorial discourse that similarly stems discussion over issues of environment, politics, colonialism, and history.

(Images, from top to bottom: Eddie Chan; John Choy; Michael Wolf.  Images courtesy of 1a Space and the artists.)