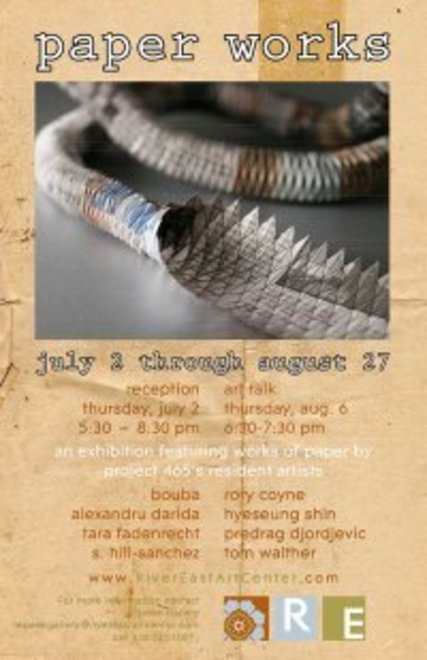 Due to various baby-sitting gigs, walks to Navy Pier, and trips to the AMC movie theatre I have found myself, many times, awkwardly standing in front of the River East Art Center (REAC) passing the minutes while I either wait for the appropriate time to arrive at a family’s door, or I linger while some out-of-town friends, who are mostly likely lost and therefore late, arrive. Thus, I have often found myself wondering about this shiny red warehouse, which stretches a quarter-mile down Illinois Street...what exactly is it? After many Google searches, I have learned it’s quite the place to host your next wedding, charity event, or private party. Sadly, but perhaps unsurprisingly, little was found about the actual art, which is too bad because there is art, good art, and a lot of it within this warehouse.


REAC houses six galleries. The ones worth noting are Aldo Castillo, a contemporary gallery specializing in Fine Latin American Art, Ogilvie/Pertl Gallery, which features the work of emerging and well-established artists, and REpose Gallery, which exclusively represents all of the resident artists of Project 465.

REpose Gallery was my last stop, and after interrupting the man-behind-the-desk’s chess game, I learned that all the exhibited artists have their studios in the lower level of the REAC, and together, they run the space which makes for an interesting display of work that is both incredibly varied yet cohesive. Project 465 is dedicated to promoting and representing the resident artists, including Bouba, Sergio Ceron, Jose Luis Corona, Rory Coyne, Alexandru Darida, Predrag Djordjevic, Tara Fadenrecht, S. Hill-Sanchez, Heyseung Shin, and Tom Walther.

Of particular interest were the grey-scale paintings of Tom Walther. Some of his work, at first glance, could be mistaken for photographs. However, at a closer view the meticulous brush strokes become evident, thus forcing the viewer to look closer, and look longer—these images are not what they seem. His works juxtapose incongruous subjects and contexts, which elicit contradictions that are immediately humorous, but slowly reveal themselves as dark and probing comments regarding the absurdity of an over-generalized and shrinking world. His painting, “Eve on the Acropolis” features the singer/rapper Eve sitting provocatively on the back of a white horse in front of a Parthenon undergoing construction. Undoubtedly establishing his knowledge of both art history and pop culture, he leaves us with an absurd and wildly imaginative image I simply don’t get; yet it sustains my intrigue and bemusement—I have a feeling that’s the point.

Posted by Abraham Ritchie on 7/27/09
RELATED ARTICLES
COMMENTS (1)
About REpose Gallery
Thanks for the great words on REpose Gallery! I oversee the artist residency program at REAC, and I'd like to clarify a couple things regarding our gallery. It is actually run by Marcela Andrade, Gallery Manager, though the artists are a huge help to us, in both their willingness to sit the gallery (allowing us to be open when we might not otherwise be) and in helping to plan and (un-)install the exhibitions, so that we are able to fill three gallery spaces rather than just one. I believe you extracted a quote from the old issue of Chicago Gallery News, as our current resident artists are: Bouba, Sergio Ceron, Jose Luis Corona, Rory Coyne, Alexandru Darida, Predrag Djordjevic, Tara Fadenrecht, S. Hill-Sanchez, Heyseung Shin, and Tom Walther. We've been selected as a featured venue for Chicago Artists Month this October, and will be offering an extensive program (10/2 & 10/30 receptions, Tuesday 10/6 & 10/20 lectures and panel discussions, and an open studio weekend with classroom demos) so please come check out what we're up to -- both in the street-level galleries and on our lower level! Meredith R Winer Artist Coordinator Project 465, River East Art Center
Comment by: MRWatREAC on Tuesday 07/28/09 at 11:33 AM
ArtSlant has shutdown. The website is currently running in a view-only mode to allow archiving of the content.