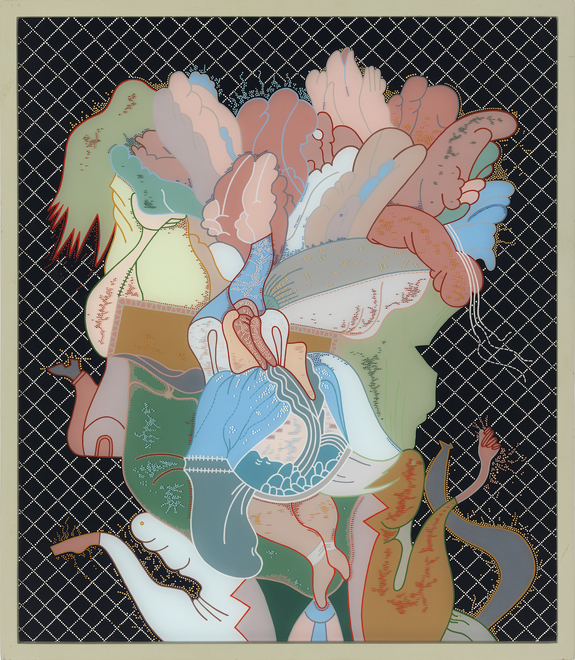 There is nothing reductive or insignificant about Barbara Rossi’s Poor Traits, a collection of paintings under the homophonic title that refers to the artist’s portrait-like compositions, currently on view in the DePaul Art Museum’s second floor galleries. In a series of graphite drawings from the late 1960s and reverse Plexiglas paintings from the early 1970s, Rossi’s works are some of the more enigmatic examples of the Chicago Imagists. As this exhibition makes clear, Rossi’s twentieth century contributions were less Pop in their registration; other than the gestalt effect of the abstractions, they feature almost no conventionally familiar material, brand, object, or otherwise. Rossi’s illustration of form approaches instead the limits of the Imagist movement—with a certain inscrutable, mysterious, and sphinxlike effect.

Whereas the portrait is often outward facing by nature—a central configuration that depicts the subject looking toward the viewer—Rossi’s paintings develop inward, as if their series of overlapping gestures, marks, and ornamentations were woven into a visual fabric, presenting the viewer with a knot, rather than a ribbon. For most artists, this quality would make the work withdrawn and impenetrable. Though for Rossi, this is one of the virtues that makes her works unlike anything else that exists in the world: they produce their own image, bound in the conflation of realism and abstraction, in a method that undoes the conventions of the genre at hand.

In a series of three works, whose titles unfold like absurdist, cartoon-like alliterations—Quick-N-Quack (1975), Knot-N-Knob (1974), and Gnat-N-Gnaw (1975)—the tangled collection of curved and angular forms results in anthropomorphic characters. In Knot-N-Knob, the composition echoes the outlines of nineteenth-century Japanese Oiran woodblock prints, though the impression of the insinuated figure is treated no more or less importantly than the passages of light blue, deep burgundy, and ochre yellow pattern surrounding it. While the figure is clearly demarcated against the camouflage-green background, the flatness of the painting’s treatment renders the portrait anonymous, unspecified, and unknown. In the lower section of the image, robot-like hands spindle and intertwine, imperfectly mirroring the quasi-symmetry of the work’s overall structure. The negative space within the central configuration of marks, untouched by the sinuous ornamentation of shapes alluding to hair or textile elements, becomes a stand in for a face—or perhaps “mask” is a better term—adorned, almost ceremoniously, with accessory. The paintings resist the historical qualifications of their genre; while the portraits are built out of these “extras,” they are hollow of the figure itself.

This is the first mark of delinquency of these Poor Traits. 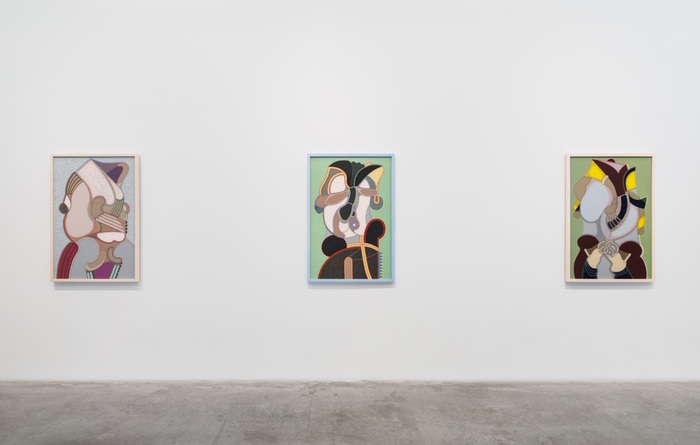 The second is born out of their defiance to the singular. Instead, the paintings favor multiplicity—an image that lets you know how much there is within the picture through its visual experience. The portraits’ ambiguity suggests that there are countless faces to be found within the labyrinth of gestural forms, while at the same time, each of these actions is meticulously and laboriously embellished with line work and dot patterns to create a frenetic tessellation across their entire surface. The overwhelming detail in each of the Poor Traits’ compositions forces you to study the entire picture slowly. In Rose Rock (1972), a corporeal mass of blushing pinks, rare flesh tones, and enflamed scarlets presses up against cool bands of verdant greens, and desaturated hues of riverbed blue. Within the composition—an exquisite, pulsating reservoir of endless forms—each of the demarcated parts ebbs and flows into one another to create myriad combinations. In an interview with Natalie Bell, Associate Curator at the New Museum in New York, where the DePaul exhibition is travelling from, Rossi alludes to this concept as a fascination born out of her relationship to Indian Miniatures. The same conceit, of scenes within a scene, allows for the portraits to work against their rigid illustrative structure, transforming them from a subject into a setting. In Rossi’s omniscient landscapes, their gaze usurps the viewer’s.

The conquest of Rossi’s portraits is that they defeat the certainty of a subject that stares back. 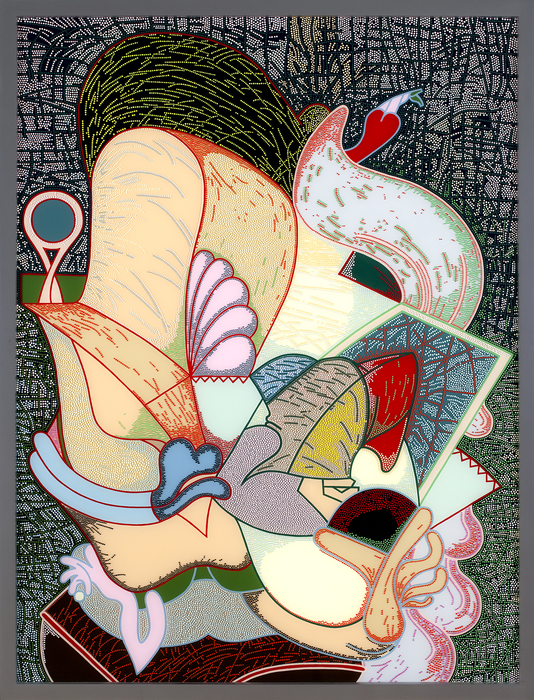 Their third offence is against time. There is something persistently anachronistic about Rossi’s paintings—they belong to the future as much as they appear timeless, forever bound in their own moment. Their peculiar and fantastic treatment of the figure in space makes them hard to chronologically pin down. Just as Indian Miniatures were painted for a god, without shadows—timeless, and unaffected by the degradation of history—the historical functions of portrait painting cannot be separated from its once-religious purposes; icons were painted for saints commissioned by the Church, nobility was rendered according the divine right of Kings. While the formal tenets of Rossi’s compositions may exist outside of time, they are not without gravity—this is their cardinal sin. Their folds indicate movement, a simultaneous compression and progression of form developed through evolution, rather than stasis.

But of course, the moral suggestion of Poor Traits is that the paintings are beholden to (if not validated by) their transgressions. To be sure, they are corrupt—though their crimes are as premeditated as they are permissible.

Stephanie Cristello is a Senior Editor at ArtSlant.