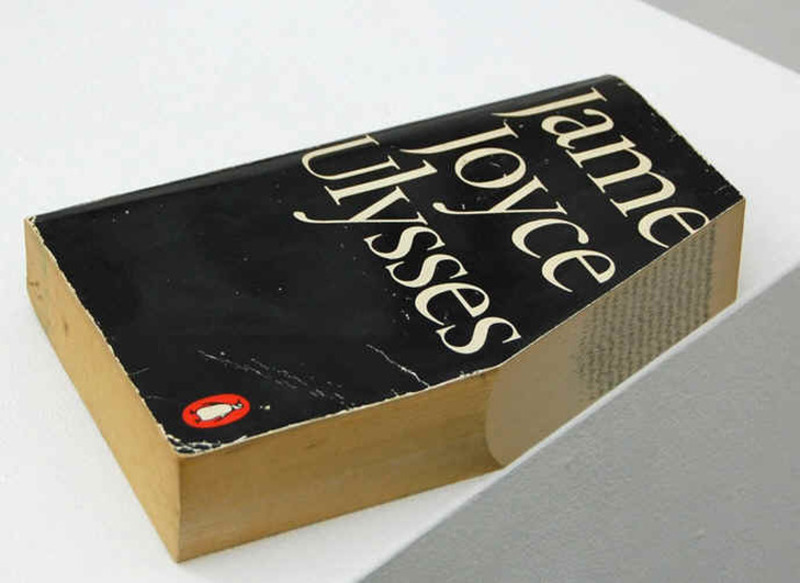 Terrorists in the Library: A Peculiar Specimen

Terrorists in the Library, a speculative research project organized by Chicago-based curator Ruslana Lichtzier, is a peculiar specimen.

For one, it is located in the President’s Gallery of Harold Washington College in Chicago’s Loop, as part of Pedestrian Project, a lecture and exhibition program at the college. Situated at the end of a hallway on the eighth floor, adjacent to rows of administrative workstations, the work that is immediately noticeable is garishly out of place, and the those works not so easily identified half-hide themselves as interventions within the office. The gallery’s off-white walls, brown carpet, and empty reception desk do not invoke Art Show.

That’s just fine, though. This is not an art show, as the curator is careful to make clear: it is a speculative research project. It is not a group show but a living and growing archive, now presented in its second iteration. The first installation of Terrorists in the Library was exhibited in 2013 in similar fashion, in an academic building belonging to the School of the Art Institute of Chicago, a few blocks away. This iteration includes two nights of public performances within the space. 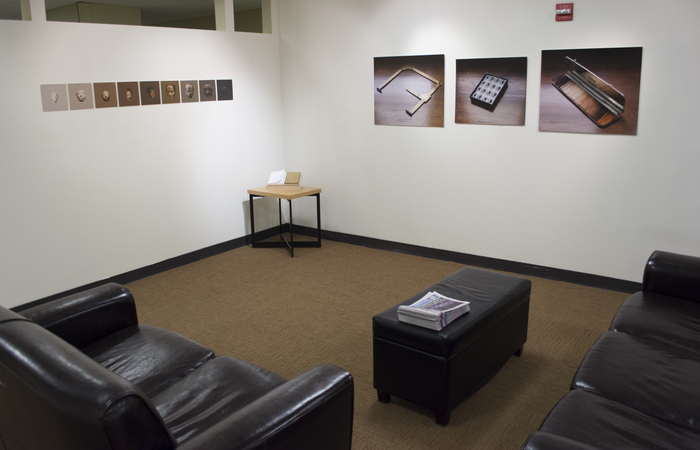 Terrorists in the Library, Installation view. Courtesy of Ruslana Lichtzier

Its title is undeniably antagonistic. An accompanying handout cites a WARNING that “under the federal USA PATRIOT ACT (Public Law 107-56), records of books and other materials you borrow from the library may be obtained by federal agents.” The document, imitating actual posters printed by libraries in 2003 and onward, sets a stage. The “Library,” a physical space of documents, archives, and histories, becomes a symbolic space for knowledge-sharing, investigation, and access—one that is directly threatened by the FBI-issued gag orders to librarians and data mining that have occurred in the name of national security following 9/11. At the same time, the Library itself poses a threat: as a site of the canon, collective knowledge accepted as fact, and as the press release describes, the “powered position of catalogued knowledge.”

The press release ends with a quote from Jean Baudrillard’s The Mind of Terrorism: “In the end, it was they who did it but we who wished it.” Isolated and abstracted in this context, it sets a tone both ominous and somewhat chiding. The quote within the original text implicates all of us Americans in our complicity and assumption that an event such as the attack on the World Trade Centers was inevitable, merely a matter of time, rather than a direct consequence of hegemonic power and forceful globalization.

So what do these things, which act as foundation and framework for the greater project, have to do with the works included? In some instances, the connection is direct, as in artist Anna Shteynshleyger’s series of photographs from Eastlake Terrorce I. The images depict an apartment designed to imitate a terrorist’s living space, complete with laboratory in the bathtub and questionable pieces that appear to be the parts of a homemade explosive. The installation is expertly executed, created an aura of devious behavior and impending tragedy—so convincing in fact, that a neighbor called the police to report a suspicious object visible through the window of the apartment the installation is staged in. An entire Chicago city block was evacuated for the FBI and bomb squad to investigate. 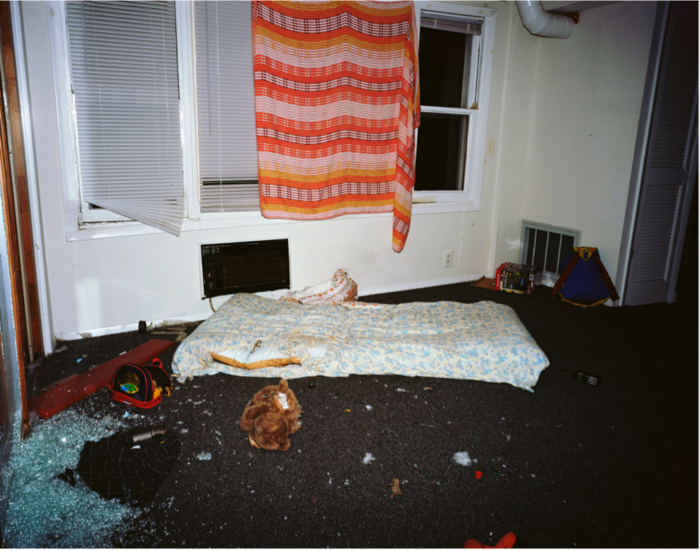 While not all of the artworks fall so neatly under this rubric, there is a common thread throughout the project: many if not all of the works included have a lifespan, in the form of ongoing performances, unlimited editions, or the real-life consequences of the work. This is certainly true about Dan Miller’s absent work, About our stack of printed paper (placeholder for a Samizdat), which consists of a shelf holding a printed email that recounts Miller’s Kafka-esque journey through Russian bureaucracy to ship a samizdat from Russia for the exhibition (it had not yet arrived when I visited the exhibition). His copy of a samizdat, a form of subversive self-publishing during the Soviet Union, had to be formally recognized as having no cultural value in order to leave the country, something difficult to prove, as it had no ISBN or cover.

Lior Modan’s Villa of the Papyri, a jarring composition of fabric and mesh, with a vacuum-formed relief of a misshapen arm and books, functions as a mobile mausoleum as the artist entombed his favorite books in the vacuum forming process. Dario Robleto’s ongoing intervention, Tonight I’m Gonna Party Like It’s 2099, is described in vinyl as an ongoing action where Robleto seeks out mentions of the end of the world in library books, uses white out to erase the specific date of said apocalypse, and replaces them with a date one hundred years later than written in the original text. 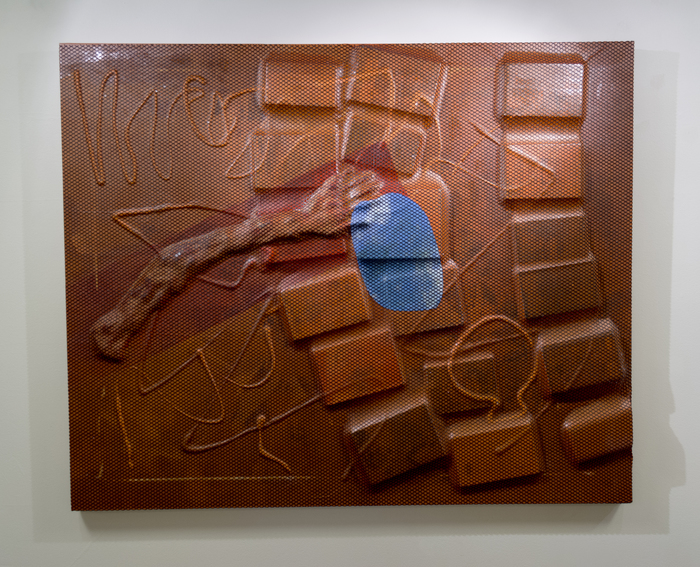 As I became familiar with the exhibition, I found myself attempting to categorize the works. As a research project, the exhibition felt like the dozens of tabs open on my computer—all opened on my search for something not entirely related to any of the webpages leading me there. The exhibition’s effort to question categories did not stop me from making arbitrary groupings—of works that point to dangers of classification, works that embed themselves within the archive, interventions within the archive, works that have consequences, and works of consequence. It did not make the experience of viewing the exhibition any more coherent, but it did place me within the project itself: as a patron of the Library and product of the archive, a writer challenged by the limits of categorization as a form of understanding.

Terrorists in the Library is on view until November 23. “Are You The Terrorist?”, a night of public performance programming, will take place on Friday November 6, 5–7pm.