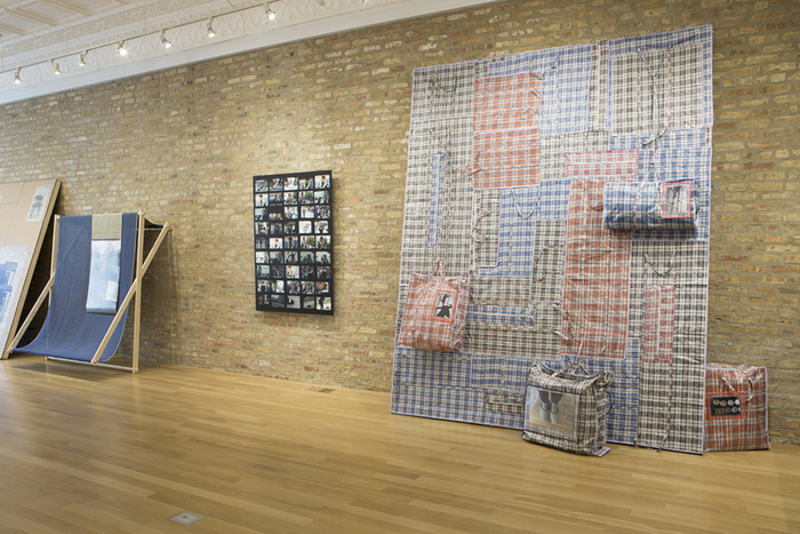 The Personal Is Political: Ellen Rothenberg at Sector 2337

In experiencing elsetime, Ellen Rothenberg’s solo exhibition at Sector 2337, there’s a moment when you realize that you’re not going to get any answers. Nothing conclusive, that is. Rothenberg’s approach to making—performative, research-based explorations of personal/political history—has no time for neat folding-up. The plethora of media on display—ranging in scale from large lean-tos to shifting photocopies of books—all of these give the impression of a slowly shifting organic system complex as a treetop or a marsh. Focus on just one element and you risk missing the rich interplay on hand.

Rothenberg herself is the gravitational center holding everything together. Elsetime’s major components include photographic documentation of Bertolt Brecht’s studio; individual photocopies of pages from books relating to Brecht, his lover and collaborator, Elisabeth Hauptmann, and his theorist son, Stefan Brecht; two photographic montages, one seemingly showing a performance of Rothenberg’s, the other, Woodstock; a series of large lean-tos, one with shoes from the aforementioned performance; and a working turntable that visitors can use to play records from 60s-era musicians. The exhibition isn’t strictly about Brecht, or Woodstock, or activism. It's about Rothenberg’s personal experience of all of these. 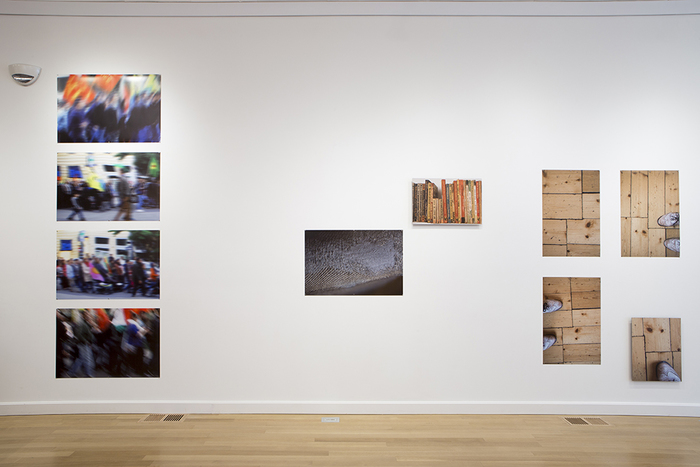 The Woodstock montage, for example, includes an image of a MacBook keyboard, disrupting the easy assumption of the images as simple documentation. Are we meant to be experiencing the historical event, or documentation of the event years later—or both? Rothenberg’s own performance (from years earlier) is shown in a similar photographic format, as an event suspended in time to be reflected on, rather than as a smooth, ever-contemporary video. Four large photographic prints of a political protest take a different technical approach to subjectivity, relying on the blur of camera shake to signal the (color) saturated excitement of destabilization. Rothenberg historicizes her memories while insisting on personal truth, as experienced in both the past and the present.

In what may be the exhibition’s most grounding work Rothenberg turns her attention to Brecht-Weigel Gedenkstätte, the house where Brecht and his wife, Helene Weigel, lived for several years until his death in 1956. Rothenberg photographs Brecht’s bookshelf, a stitched up old armchair, light bulbs, her own feet on the floorboards. There’s comedy in the photographs (what on earth can one learn from looking at Brecht’s and Weigel’s light bulbs?), and familiarity (who hasn’t looked reverently at the objects of Great People?) and, finally, an implicit feminist critique: today, Brecht is mythologized for his brilliance as a writer and director, as well his constant affairs. Rothenberg’s insistence on the details of live domesticity pull Brecht out of the History of Great Men and back into the land of humankind. 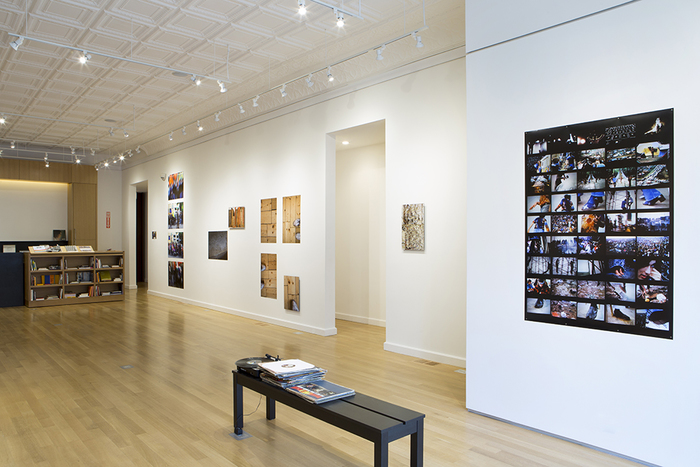 This version may seem overly simplistic. It is. Focusing on one thread of discourse in Rothenberg’s work means not fully considering others. It would be easy, for example, to trace Marxism as a theoretical consideration of the exhibition, from Brecht’s debatable commitment[1] to the largest of Rothenberg’s three lean-tos, which is covered in plastic from generic plaid shopping bags and features two Constructivist photographs of workers on steel scaffolding. But then look down and see a third photograph: a pair of feet (Rothenberg’s?) in sneakers with a large pair of slip-on slippers on top. The theoretical and the personal are beyond separation. A small photograph of Rothenberg’s son hangs near the Brecht photos—is he fated to be Stefan Brecht, living under the shadow of a successful creative parent, or just another distanced viewer of an archive ready to apply his own subjectivity? The personal is political is personal.

The pleasure of experiencing elsetime lies in the works’ layering. Rothenberg, and Sector 2337's Caroline Picard, an occasional ArtSlant contributor,[2] have created an exhibition that is deeply academic without pedantry, deeply personal without bathos. Anyone prepared to spend time with the work will be rewarded, not with answers, but with a deepened appreciation of how unnecessary such summaries are. As Gertrude Stein put it: “There’s ain’t no answer. There ain’t gonna be any answer. There never has been an answer. There’s your answer.”

[1] Brecht never joined the Communist party, despite a strong interest in Marxism. He was blacklisted by the Hollywood studio system during the Cold War, subpoenaed by Congress in 1947, and received the Stalin Peace Prize in 1954.

[2] Full disclosure: I know Caroline Picard! I have had the pleasure of working with her in different capacities over the past several years, and I count Chicago lucky for having Sector 2337 as a relatively new arts destination. Regardless, I would not be writing about this exhibition unless I was interested in the work itself. I have no connection to Ellen Rothenberg.