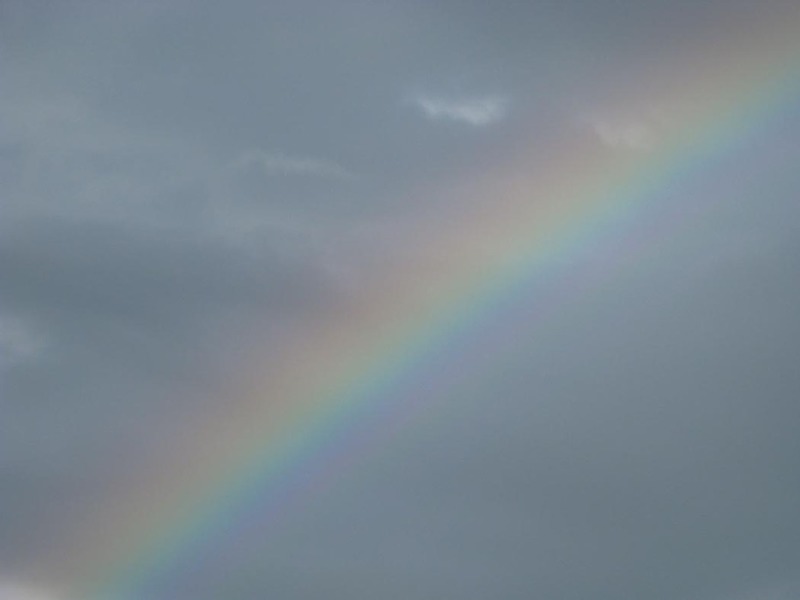 We Live in Nature's Colors

While Robert Davis/Michael Langlois use pagan and biblical mysticism combined with psychedelia to find a sense of spiritual uplifting, Scott Wolniak is using the color spectrum and New Age methodologies. Adjacent to the Davis/Langlois exhibition at the Chicago Cultural Center is Wolniak’s “Ungray: Color, Light and Other Balms.” The work first encountered is a small, framed photograph, a gray sky with just a hint of a rainbow cutting across it. It’s a little sad, a little funny and a little compelling. I connect it to the Art Institute’s Jackson Pollock, Greyed Rainbow, 1953, that is on view just down the street. This picture, Untitled (08/08/08), 2008, serves as a key to the rest of the installation in a way (shown at top). The date, presumably of the photo’s taking, hints at some sort of significance beyond the image it contains. 888 is magical, maybe.  As we learn from the gallery text, the colors and tones being presented to us are calibrated on specific progressions as outlined by “energy chakras.”

This is all to be taken with a grain of salt. “Lighthearted,” (perhaps pun intended) is the word to use. The work is fun, not funny, but it is that tension between the casual take on color and light therapy to chase away the winter blues, and art objects that function on an accomplished formal level that holds the viewer’s interest.  Improvised Grass, 2008, is a perfect example of this. Sprouts of plants appear to grow out of the gallery’s grey brown carpet in a neat row. Coming from an established vein in Wolniak’s body of work, the plants are made from colorful trash. In this case rather than attractive weeds, they are grass, something that is either highly desired or uprooted depending on where it pops up. Mixed in with the colorful print ads are bits of “studio detritus,” cut up bits of paper related to the attractive but toxic Simulated Sun Prints (1-5), 2008.

Normally one would make images by strategically exposing areas of colored paper to the sunlight, thereby fading certain parts and not others. Chicago is gray in winter, however, so instead of sun bleaching, Wolniak Clorox-bleached. The result is a suite of visually attractive abstractions that resemble Sigmar Polke or Dieter Roth in method, but the surface of the sun or the Antarctic tundra in image.

The hypnotic and eerily soothing Music Notes in Harmony with the Attuned Healing Colors, 2008, projected video provides an overall backdrop for the small grouping of work. The soundtrack, provided by Jim Dorland, works from a New Age rubric as the images in the video are derived from footage of a cheap light therapy lamp. The result is a soft grid that oscillates chromatically and musical score that vibrates tonally. It is little like watching a video for a trance song late night on MTV’s AMP, but it also hard to walk away from. Standing in a dimly lit room, with these bits of color around you, surrounded by airy space is a funny, but comfortable experience. You think about the Modernist artists and composers that thought things like pure abstraction or certain arrangements of notes could lead to humanity realizing its true potential. Were they comically mad, or was there something to it? Which is weirder, getting high off of drugs or from staring at colors?

Posted by Erik Wenzel on 1/26/09
RELATED ARTICLES
COMMENTS (0)
ArtSlant has shutdown. The website is currently running in a view-only mode to allow archiving of the content.