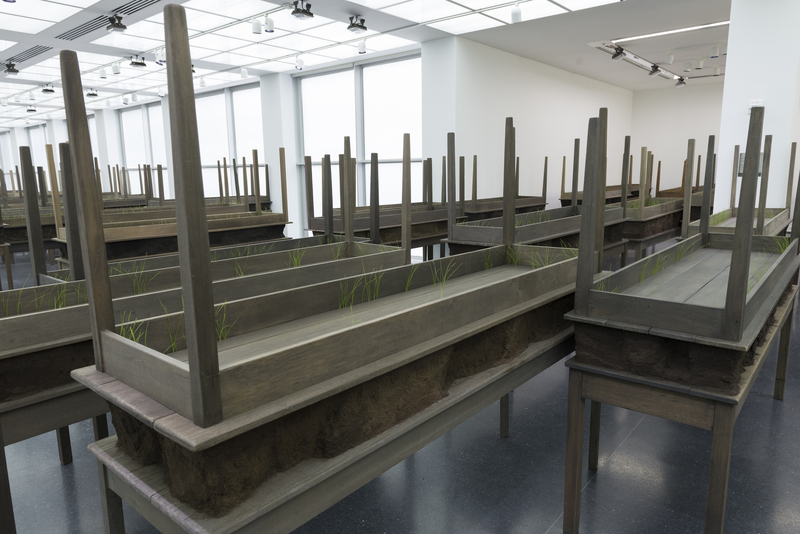 The Making of Violence: Doris Salcedo at the MCA Chicago

Internationally acclaimed artist Doris Salcedo opened her first US museum retrospective at the Museum of Contemporary Art Chicago (MCA) last week to great anticipation: Latin Americanists had been anxiously awaiting the opening of the Bogotá-born artist’s survey, and it seemed all of Chicago was enthusiastic as well. Co-curated by MCA Director Madeleine Grynsztejn, Curator Julie Rodrigues Widholm, and with assistance from Steven L. Bridges, the exhibition presents Salcedo’s large body of work in roughly chronological order, from her early mid-1980s Untitled installations to her most recent 2014 series Disremembered. Salcedo’s collected objects—“installations,” as she prefers to call them—are grounded in rigorous fieldwork and research on loss and trauma due to war, violence, and other calamities.

On the fourth floor of the museum, we first see a large installation titled Plegaria Muda (“Silent Prayer”) (2008–10). The space is filled with multiple sculptures each composed of two wooden tables, one inverted upon the other, sandwiching soil and live grass, which grows upward from within. Walking in between these sculptures, which are the size and shape of human coffins, arranged in the room much as tombs are placed in a cemetery, is a powerful and intense experience. The upside down tables—with their legs pointing up to the ceiling—have a disturbing and mournful presence. The work was driven by the artist’s research on gang violence in Los Angeles—but this happens in other places too, including, as we know, Chicago. Salcedo’s work is universal. As she softly said at the press conference: “Even though I’m a woman, I’m from the third-world, and I have curly hair, I want to make art that effaces those small differences.” 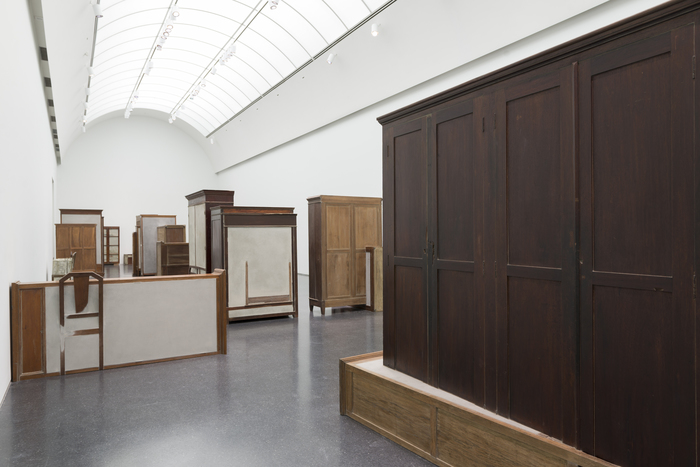 Despite the funerary atmosphere and the fixed shapes of each sculpture, Salcedo’s installations seem to come alive. She asks the viewer to become “involved” in the adventure of viewing them.[1] Therefore, the work momentarily has a subtle and illusory identity at the same time as being persistently present. To achieve this presence, Salcedo meticulously takes the context into consideration: lights, ceiling, distance between the works, floor, and labels. Because her work involves objects (mostly furniture) from domestic places, it is important for her to evoke something else when they are in an art space—a displacement. This displacement is not just in the context of art and its display, but also in the actual world.

For the creation of La Casa Viuda (“The Widowed House”) (1992–1995), Salcedo interviewed rural Colombian women who were forced to move out of their homes in search of a better life. Here, worn wooden doors are sawed in half, their pieces folded at right angles against one another, one half resting on the gallery floor. On one of these sculptures, Salcedo places a rusty, metal seat, which could be part of a children’s toy. This small chair is supported by the curves of two human rib bones. Were it not for a description in the small exhibition brochure, viewers would not know that the work references the specific situation of displaced women in Colombia. Yet knowing this precise context is not essential for understanding the works—the sculptures speak for themselves. It could be in Colombia, Los Angeles, or Chicago, as “violence happens everywhere,” according to Salcedo. She creates spaces of empathy that refer to violent events that cause irreparable damage, ones that are not limited to obvious signifiers of violence (natural, political, social), but instead ones that mankind finds or invents.

Salcedo’s site-specific public projects have been a fundamental part of her career. In the lead up to the exhibition, there had been quite an expectation in the Chicago art community to see a new public project in the city, but disappointingly, due to lack of funds and other factors, the project could not be realized. Instead, the MCA produced a video documentary that highlights some of these public works through interviews with the artist, her studio assistants, and scholars. Accompanying the video in the exhibition is a simple white shelf with selected books by Salcedo in English and Spanish by Jean-Luc Nancy, Paul Celan, Emmanuel Levinas, and Derrida, among others. Although somewhat revealing, the austerity of this room and the simplified informational video leave us wanting more.

Salcedo’s metaphoric and abstract installations deal with intense political topics that create an ambivalent aesthetic of “enjoyment,” with both pleasure and displeasure. In other words, we empathize with the crucial factor in the artworks that is therefore, the sensation itself: the inner motion, the inner life, and the inner self-activation. While the artist intentionally directs us toward the artworks—as compassionate witnesses, as appreciators—one cannot help but at times feel distant under the pressure to relate. 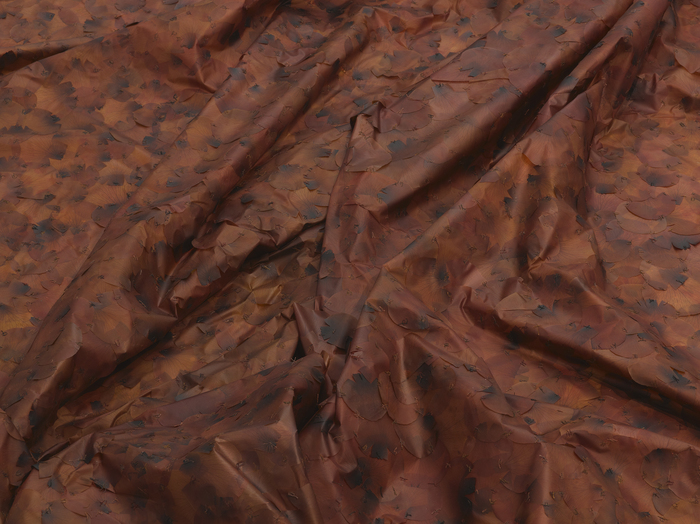 There is also tension between this sensation of empathy and a sense of mysticism present in the work. The delicate labor and craft displayed in Salcedo’s work is a testament to the large number of people in working in her studio in Bogotá, and it’s hard not remain in awe of the detail in her installations. In one of the last galleries, a stretch of deep red material spreads across the floor in delicate folds (A Flor de Piel, 2011–2012, 2014). How was Salcedo able to sew thousands of rose petals, transforming them into this huge blanket? Similarly, in Atrabiliarios (1992–2004), worn women’s shoes are encased in niches embedded into the gallery wall, each covered with a thin layer of cow bladder, which is affixed to the wall with medical stitches. Though the installation is complete, a number of the hollows built into the gallery are left empty, negatively but also realistically, anticipating more death to come.

Unfortunately, history suggests that the future waits with more tragedies, like the terrible events Salcedo’s work has grappled with in the past. In light of this knowledge, art should give an alternative, a better form of abstraction, or at least enough awareness to not despair. And this is precisely Salcedo’s investment: to produce a common place to stop and reflect. Her installations produce this universal space, where it does not matter who we are, where we come from, or what we believe in, but where we can empathize around an artwork as one connected community.