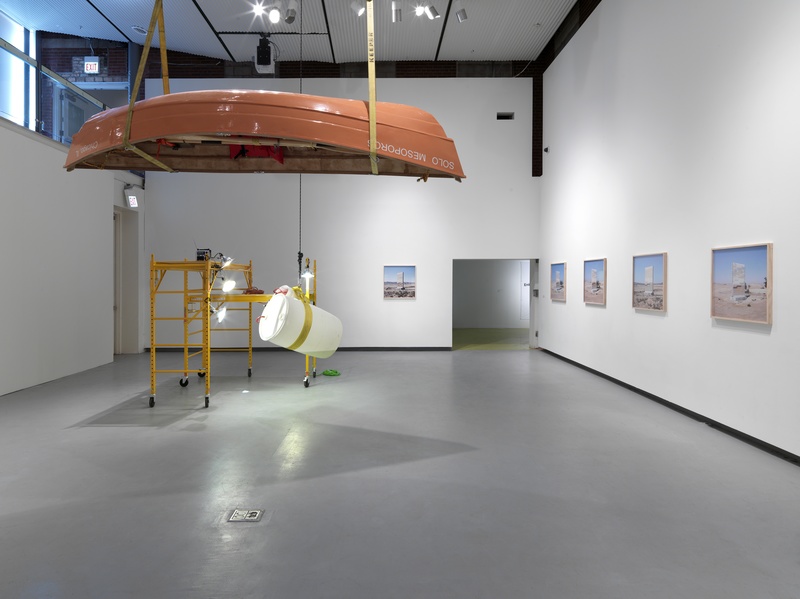 The Middle as a Means to an End: The Chicago Effect at the Hyde Park Art Center

In the forward-thinking exhibition The Chicago Effect: Redefining the Middle, curators Allison Peters Quinn, Christopher K. Ho, and Megha Ralapati explore the notion of the Middle, coinciding with the 75th anniversary of the Hyde Park Art Center (the “Center”). Of course, defining the middle is not an easy task. The mere attempt to define “it” and its ubiquity is confusing—but this exact confusion makes the experience of the show all the more intriguing.

In the instance of the exhibition, which comprises ten artists’ works and projects in collaboration with other art organizations[1], two aspects of the past appear: there is a passion for a past that is escaping and for a past that acts as a reproduction. In this exhibition, as well as in their wider programming, the Center asks a series of self-critical questions: What does an institution’s history tell us about the present? What do artists need now? How does the Center—as a mid-size institution—relate to others? These questions seem to be symptoms of a mid-life crisis—another “middle”—a conflicted existence that is positively trying to resolve itself. 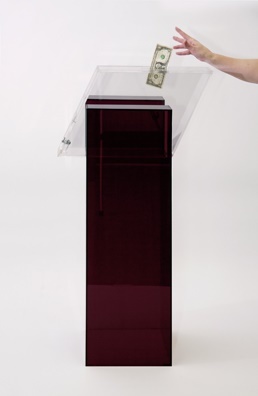 Devon Dikeou, Pay what you wish, but you must pay something, 2011-2014, Wood, Plexiglass, paint, Dimensions variable.

Rather than deal with hard distinctions or dogmatic oppositions, the artists in the exhibition work around a place—a crossing space, an intersection where the differences are at once blurred and vague. The exhibition is displayed in the lower gallery of the Center as well as in the hallways. It is itself in the middle of everything. The first piece viewers see are donation boxes, entitled Pay what you wish, but you must pay something (2011-2014) by Devon Dikeou. Like Duchamp’s well-known Fountain, they are both artwork and non-artwork at the same time. Dikeou asked multiple museums to let her replicate and display a copy of their donation boxes, procuring nine boxes from museums like the Warhol Museum, Cincinnati Museum, Bass Museum, Denver Museum of Art, Clyfford Still Museum, and others. Dikeou’s installation points to the administrative aspect of art and the artist herself as a mediator. The project also recalls Marx’s “commodity fetishism,” in that the perception of social relationships in production is not between people, but rather between money and exchanged commodities. Here, the donation boxes act as mediators between the public and the museum.

Similarly, the artist duo Essex Olivares’ Office Riddim (2014) presents a choreographed performance of administrative activities in an office. Patrick Meagher’s The Fifth Dimension (2011-2014) has a marketing look—similar to a CEO slide show presentation—though its contents are more interpersonal, an instruction on how to relate to others. Both works have an aspect of self-discovery under their organizational surface. They join Dikeou's contribution to portray the seemingly banal, but in fact essential aspects of administration and policy.

In Untitled (Series R) (2010), Assaf Evron generates five photographs of a tall, precast concrete wall. The enigmatic construction, which was in fact photographed sitting against the landscape of the desert in Israel, acts as an industrial replica of itself; the piece is an experience based in reproduction. The works are displayed in the lower gallery of the Center in a compelling way: four works are separated from the primary work that hangs by the entrance/exit of the gallery. The distance between the pieces evokes another wall that has yet to come. The photographs contain bureaucratic connotations; the premade walls are municipal developments. However, the five photographs point to additional aspects of the “middle”: movement, transportations and separation. Evron’s concrete wall is found in a halfway location, in the intermediary space between point A to point B. 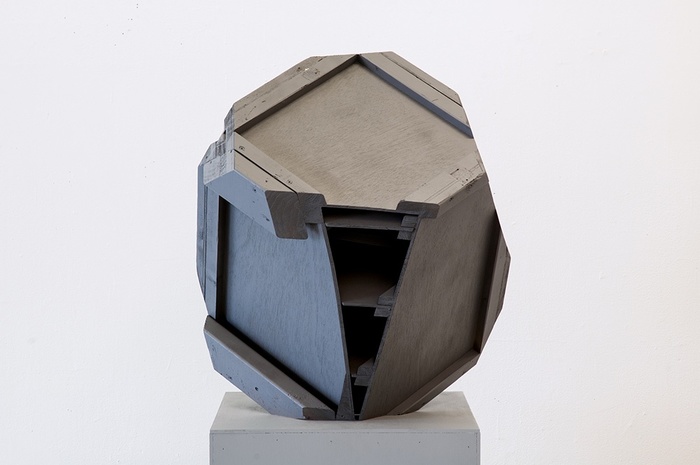 Similarly, Lan Tuazon’s Parking Lot Island (2010) and Parking Lot Landscapes (2011) focus on how transient space is organized. Tuazon, interested in the parking lots of Manhattan as connectors between spaces and people, explores the lot as its own type of landscape. The “middle” can also be defined as a way to create something new with the old, such as in Robert Burnier’s work. Burnier, who is well known for his folded aluminum wall pieces, utilizes instead his old painting frames to create two crates. He chooses to title his pieces in Esperanto, a constructed international auxiliary language, and uses both text and form as grounds to represent a neutral territory for communication.

Jan Tichy receives the hallway as a location to display his works—a marginal but frequently transited space. Tichy’s poetic Installation no.21 (2014) is a site-specific work commissioned by the Center for a permanent video façade. “I see it as activating the building’s façade with time based light animations,” explains Tichy. The visuals of the work, composed of multiple projections facing the upper windows of the Center, are comprised of abstract shapes and forms that follow the structure of the building. Light itself, at the core of Tichy’s oeuvre, offers infinite possibilities as a medium to make visible the invisible. In lightening the Center’s architecture, Tichy illuminates the more hidden aspects, and often over-looked elements of the institution.

While at first glance The Chicago Effect: Redefining the Middle appears to focus on the history and identity of the Center and the City, it is about much more. The exhibition echoes “institutional critique”—it exhibits a passion for the past that follows the art of the 1970s, while also reflecting the bureaucratic necessity in the artwork’s reproduction. However, the artists here point to existent bureaucracies as necessary entities in society: they are preoccupied with the art making rather than moving away from it. Instead of trying to construct new models of institutions, The Chicago Effect attempts to find it. The show locates a moderate model for producing work—as an artist, for the existence of an art institution, and the establishment in general. It is about a “middle” where two directions intersect, one crossroad with two middles: inward and outward, at once.

[1] The Hyde Park Art Center partners with multiple national organizations: the HPAC's neighbor, the School of the Art Institute, the Rhode Island School of Design, Michigan's Cranbrook Academy of Art, the Illinois Institute of Technology, IDEO Innovation And Design Company, the Green Lantern Gallery, DePaul University and the University of Chicago’s Science of Philanthropy Initiative.