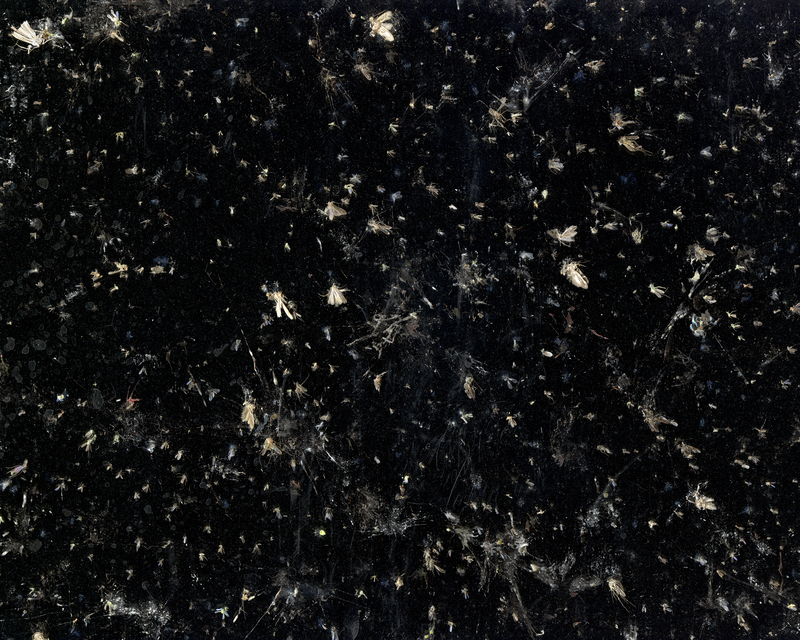 Clouded Points of Access: Phantoms in the Dirt at the Museum of Contemporary Photography

What first reads like an astral constellation is in fact a photograph whose blackness is broken only by the erratic swarm of dead insect bodies. Greg Stimac’s Santa Fe to Billings (2009) documents the choreography of the countless lives his windshield intersected on a drive between locales. The momentum of each smash is evident—guts smear and spray across the surface, recording innumerable tiny accidents. To create this piece, Stimac placed an 8 x 10 inch sheet of Plexiglass on the hood of his car. Upon arriving to his final destination—Billings, in this case—he used the car’s cigarette lighter to scan the resulting plate, thereby producing the final 20 x 30 inch photograph. This piece—its documentary mode, its gritty surface, its use of technology—is the perfect beginning for the Museum of Contemporary Photography’s Phantoms in the Dirt, a group exhibition curated by Karsten Lund, which currently showcases sixteen artists. In each work lies a theoretical straw: something the viewer grasps with sudden exuberance and recognition—Yes! Bugs spatter on my car too!—only to bump into larger questions, mysteries, and catastrophes thereafter. Stimac’s insects might provoke anxiety in the viewer about her own mortality, or encapsulate an expression of violence both sickening and banal, or even illustrate humanity’s omniscient relationship to its environment. Like the early efforts to prove the existence of an afterlife by capturing spirits on photographic paper, Phantoms in the Dirt presents the enigmatic trick of landscape photography, stirring up powerful questions about authenticity, mechanical illusion, and existential meaning in the process. 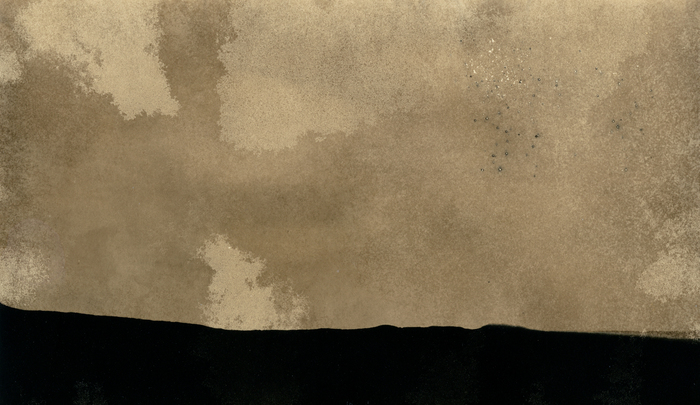 Everything about the exhibition is balanced, precise, and clean. Even the various rusty sculptures—as with Shane Ward’s Barrel, Jay Heikes’ Morality’s Reef, or Harold Mendez's Catastrophe Lacks Coherence—carry the aesthetic of artifacts carefully positioned and classified in distilled space. The museum provides a structured framework that indexes its constituent parts. Certain motifs repeat. Ironically, given the pristine museum setting, visual static persists. One has the experience of constantly trying to tune into the pure frequency of a radio station, only to find pixilation, dust, or piles of dirt interfering with the bandwidth. Santa Fe to Billings is one such example, but in wandering through the extensive three-story show, the motif gathers increasing force.

In a dark room in the far corner of the museum, Stimic’s second piece, Old Faithful Inversion (2012), projects a looped film reel of pluming smoke on the wall. To that percussive, mechanical music, five of Alison Rossiter’s small 3 ½ x 5 ⅜ inch photographs hang in elegant frames. The darkness of the room, combined with the warm spotlights, provides a dramatic aura to her archival works. The images read like black horizon lines, with crystalline cloud patterns blooming in gray overhead. Like those old spiritualist pictures, however, there is a bit of a trick at work. Each of the prints—A, B and C from her Eastman Kodak Azo F3, expired August 1922, processed in 2011 series, and #1 and #2 from her Kodak Azo No. 4, expired February 1, 1992, processed in 2011 (# Mold) series—was fabricated entirely in the darkroom using old, partially deteriorated photographic paper; the fractal patterns one takes to be the sky are in fact mold growth that leached into this particular batch of photo paper before it was used. Still, a searching desire in the viewer projects a landscape onto the devised shadow work of a darkroom, and like Ward’s rusty barrel with its shocking puddle of frozen mercury, one has to engage with a deteriorated surface. Both the metal drum and the paper respond to the potentially devastating effects of air and moisture, demonstrating the unnerving activity of seemingly inert materials.

Positioned on the landing between the first and second floor, Arthur Ou’s black and white photograph Untitled (Mountain) acts as a hybrid homage to Robert Smithson and Chinese landscape painting; a series of three dirt piles cascade down the three elegant nesting tables they lie upon, each pile appearing like its own mountain. Perhaps in answer to Smithson, the works are stunning for their purposefully domestic (rather than epic) proportion. The texture of the dirt, so rich and elaborate, compared to the smooth pedestals stands out bright and sharp against a pure white backdrop. Scattered beneath this almost floral arrangement of soil lies a negative cast of those three mountains, marking where dirt once fell loose to the floor, reminiscent of some past energy. Here again, the simple, inconvenient materiality of dirt disrupts an otherwise pristine effort. 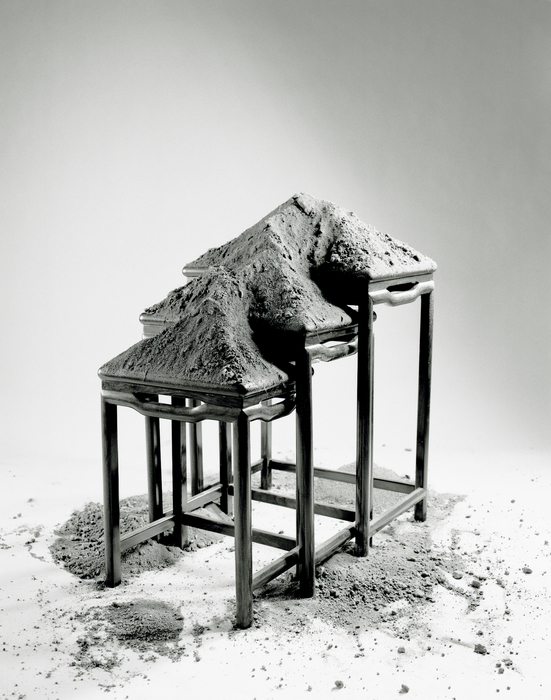 On the second floor of the space, Jeremy Bolen shows an extensive suite of photographs that further exacerbate that impression. Like Stimac, Bolen presents a different kind of documentary photography. In Plot M#1 (Print from film exposed and buried at plot m above waste from the first nuclear reactor. The film was unearthed by an anonymous force), the artist provides a mash up of site specific information: traces of radioactive frequencies invisible to the naked eye, the grounds on which those frequencies were captured by burying film, and debris Bolen collected from the site appear simultaneously in one print. In this work, Bolen photographed a smooth stone marker located at Plot M in Red Gate Woods—a plot of land that entombs nuclear waste. Without exposing the entire roll, the artist then buried the film in Plot M ground. As a result the photograph exhibits traces of lightless, radioactive energy as a blue, horizontal streak that crosses over the print through exposed and unexposed frames. After scanning the resulting film into the computer, and printing the final photograph, Bolen scatters material debris collected from the original site over the photograph; the material peppers the surface like static electricity, teasing one’s expectation for a smooth, clean, photographic surface. One wants to open up the frame and remove the obstructive grit, to wipe the insects away and get a clear picture of that otherwise dark and existential space. The instinct is joined with the urge to enter Ou’s photograph with a broom and a dustpan, to polish and shine Mendez’s catastrophe, or to wipe away the mold spores of Rossiter’s film paper.

Doing so would spoil everything.

Assaf Evron’s Untitled, (French Colonies, Moroc) is the last image viewers happen upon in the exhibition. Positioned at the farthest end of the space on the third floor, just beside the museum’s flat files, it functions like the end of a narrative, or the summit of a hike. In Untitled (French Colonies, Moroc), we encounter a field of locusts that occupy an otherwise expansive mountain landscape. Mounted and framed in a wooden box, the print is monochromatic, aged in sepia tones with locusts so extensive they read like snow in a blizzard. The image was reproduced in an old history book about colonialization; if you come too close, in fact, you’ll see it break down into pixels, as if admitting to their original, much smaller size. Here the insects interfere with an otherwise Romantic landscape, while the image itself admits a sub-layered deterioration of facsimile.

The idea of entropy comes to mind—that somehow one’s desire for cleanliness is a desire for order, and perhaps even immortality. But to focus entirely on entropy within the context of this exhibition would be a disservice; the concept itself appears anthropocentric, and conservative. Yet for that reason, in particular,  three black and white photographs by Shannon Ebner are especially compelling, presenting a possible vision of human effort within the landscape. In each instance, a figure appears traversing rather barren hummocks of ground. The figure is hardly noticeable at first, except for a pair of small hands holding a large, white, rectangular square, and a pair of barely visible calves extending just beneath the rectangle’s length. The blank, perfectly white board becomes the focal point (by virtue of exception); all other elements within the photograph host an abundance of texture and variant light. The figure carries this lightness: the desire to be clean, smooth, and eternally fixed—straining to maintain the bulk of an abstract concept. Within the otherwise pervasive paradigm of transitioning material, entropy becomes a compelling fixation, a proposition as doomed as the notion of eternal youth. Yet, if one considers the inverse—embracing the strange potential in transformation, fluidity, and surprise—indeed, the possibility of new materials in various stages of flux possesses nonhuman energies that are stunning to behold.