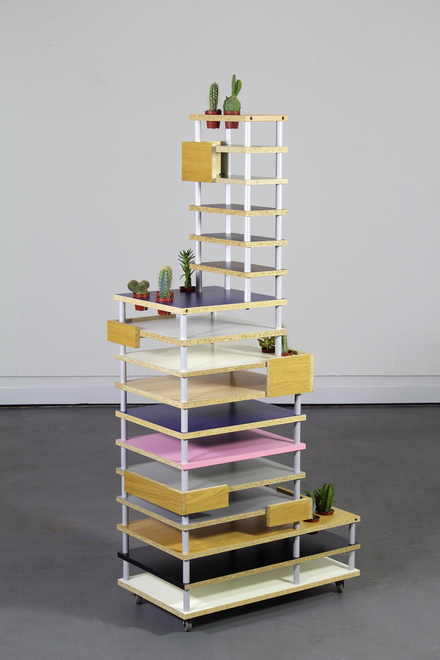 Chicago has a special claim to a Bauhaus lineage. It makes sense that the legendary German school of design relocated to the city in 1937, given that Chicago’s own selfhood story mixes industrial utopianism, innovative architecture and design, and a persistent can-doism—all qualities that mesh well with Bauhaus philosophy. Beyond the idealist affinities, though, it is hard to resist adding the prominence of the advertising and marketing industry in Chicago to the list. After all, despite its gargantuan prominence in your average history-minded designer/design-minded historian, the OG Bauhaus produced a relative paucity of actual mass-market products, or objects in general for that matter. The Bauhaus was rather first and foremost an excellent and savvy media organization, and its efforts at collecting and disseminating images far outpaced its production of things.[1] The Chicago extension likewise holds true, and is best embodied in Walter Gropius and Adolph Meyer’s 1922 Chicago Tribune Tower competition entry, a building that ultimately went unmade but has had a long and lingering shadow as a major Modernist what-if. While the building itself remains absent, its image has surfaced again, this time in Jeff Carter’s solo exhibition A Study in Lost Opportunity currently on view at THE MISSION. 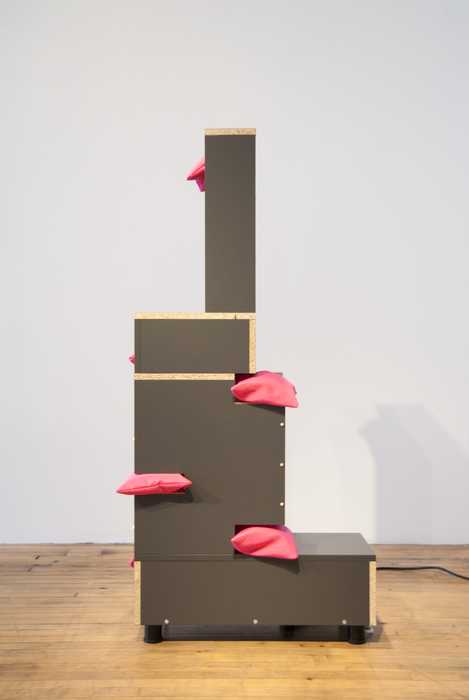 The show consists of four sculptures made from materials sourced entirely from Ikea. Each of the works repeats the Gropius/Meyer Tribune Tower in overall structure, with its three asymmetrical tiers and freely positioned balconies. These balconies, indicated in the sculptures by a variety of materials––wood panels, paunchy beanbags, or L-shaped levels––ping-pong your eyes up and down and disrupt the starkness of the gridded forms. Other variations show Carter playing with negative space, color, and humor. Untitled #1 is populated by cacti and succulents, little analogs for human inhabitants or their precariously maintained office plants. A naked soft-glow lightbulb tops Untitled #4, while #2 wears a slowly spinning drill replica in the same blond wood it rests on/in. The monumentality of the Gropius/Meyer building plans is shrunk down to bookshelf scale, each sculpture threatening to become as functional as a piece of household furniture.

In terms of interpretive significance, it feels important to draw attention to Gropius and Meyer’s perspective drawing that accompanies the exhibition in the print material offered at the door. For someone who does not have the Gropius/Meyer building up for immediate mental recall (like your reviewer here), a repeated back and forth between the drawing and each of the objects––comparing balcony placement, height ratios, repetitions, and points of departure––produces a feeling of empty reference. This realization is not necessarily negative. After all, the perspective and elevation plans were the only parts of the building that were actually published; the floor plans were never distributed. The building is all surface, just lines on a page, an image. As a result, the exchanges that happen between the fantasy building on the page and its domestically-scaled Ikea iterations mirror and muse on the heavy mediation that was the Bauhaus project. 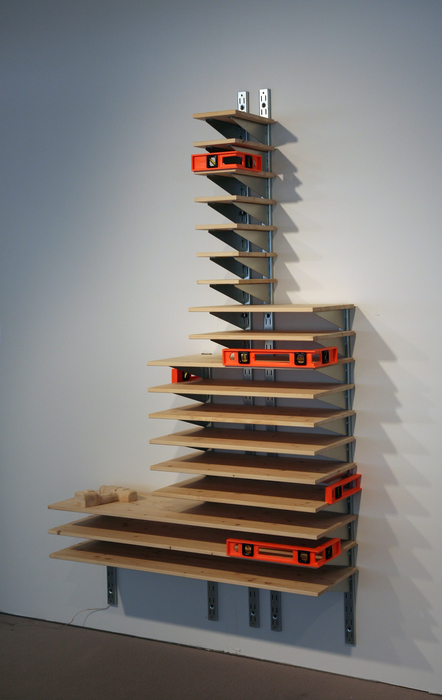 In turning over the components of A Study in Lost Opportunity, we have to ask just what that lost opportunity entails. Through the lens of a Bauhaus ideology celebrating the egalitarian potential of mass production, Ikea becomes a very ambiguous object of study. On the one hand, its products are relatively cheap, (for the most part) well designed, and make the promise of a harmonious life through design. But on the other hand, these promises are delivered as pure advertisement, and the huge box stores exemplify a type of consumerist too-muchness. The idea of living in one of LandProp Service’s all-Ikea-all-the-time communities, like those in London and Sweden, are more fear-inducing and nerve-wracking than anything else. The big Lost Opportunity, then, starts with the Gropius building that never was, and telescopes out to the Bauhausian human harmony that industrial utopianism could never deliver. Carter’s sculptures admirably condemn neither Ikea and its symbolic associations, nor the perpetuation of Grand Myths in architecture. Rather, they toss this network of associations up in the air, and appreciate the arrangements the pieces make as gravity takes hold. Whereas Gropius wanted buildings to be the “conquest of gravity, the balancing of opposites,” Carter gives us sculptures that live by the fall.