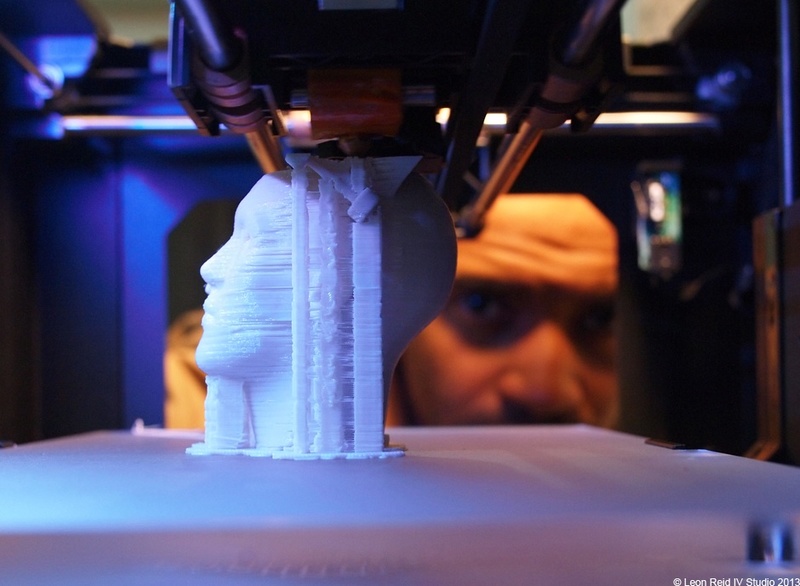 Changes in Print: How Brooklyn-based artist Leon Reid IV has adopted and adapted to 3D printing as his medium

Leon Reid IV considers himself a traditionalist. He’s a public artist, and he likes to make his work with his hands. In his basement studio at the tip of Greenpoint, tables with hidden shelves he built himself hold every type of chisel and pick and glue and rubber – all the tools and raw materials that go into creating his sculptures and installations.

But in an art market where many of the most valuable pieces are produced in massive warehouses by flocks of assistants, and wallets are far deeper in galleries and art auctions (which Reid finds boring) than in the funding for public parks and outdoor spaces, more is more, and sticking staunchly to old school, small-batch techniques can come at a price. In answer to the times, Reid made a down-payment on his future last September, which now sits against the western wall of the windowless white room: a MakerBot Replicator 2 desktop 3D printer. Not only is it his version of a studio assistant (or four), but also it is a new artistic medium in its own right that Reid believes will create a profitable niche of the art market, and one in which he can thrive.

“I feel like either I learn this, or I get left behind,” he says. “I can see the wave coming, I can see where it’s going, and I better learn it now to be competitive.” 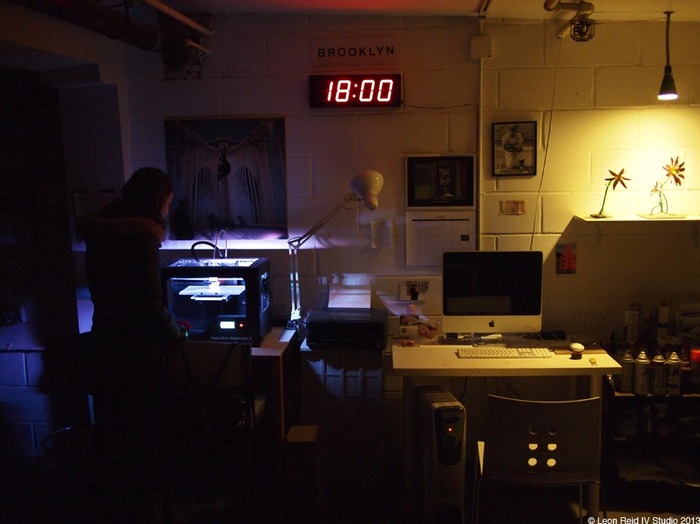 Reid has been installing commissioned works both around New York and around the world for nearly a decade. He began doing graffiti art in 1995 in his hometown, Cincinnati, which he continued through his college years at Pratt Institute, where he studied painting. But as his illegal outdoor work garnered acclaim, he switched solely to commissioned and funded works – legal creations that add subtle thoughtfulness to everyday scenery, such as one street lamp bending toward another one, as if whispering a secret. He rarely works in two dimensions. His art is driven by his ideas and opinions about the cultural struggles du jour, which are in no way flat.

In one display case in his studio, a disproportionately large credit card crushes a small man; in another, a veteran stands in arrival, back to a foreclosed home – both sculptures made over a series of months using traditional casting and molding methods. “We only have so much time in our lives to express what we want,” he says, dictating what the giant digital clock above his desk silently stands for. “I just have so many ideas that I want to get as many of them out into the world as I can before I die, which is why the printer is really interesting.” 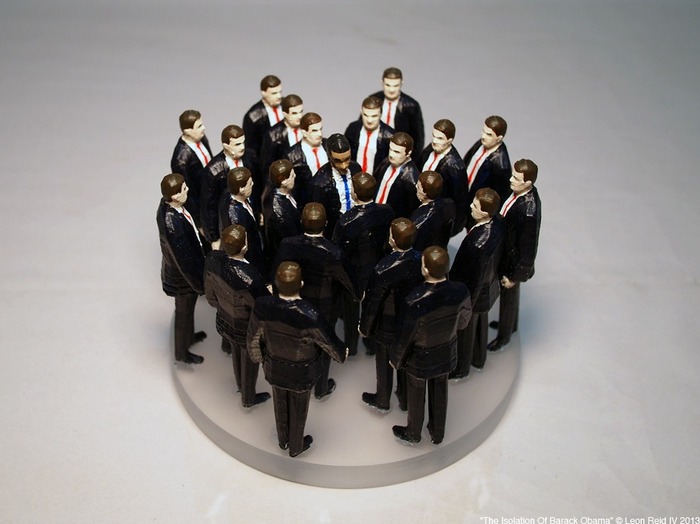 Demonstrating the process of making his first printer-made sculpture, The Isolation of Barack Obama, Reid turns on the printer and drags a figure of a man in a business suit onto a 3D plane in MakerWare, the printer’s adjoining computer program, somewhat of a techier Adobe Illustrator. He clicks print, and the open black box glows blue as a 6x6x11” frosted glass platform rises up toward a metal tip lowering to meet it. Communicating with the computer via a beeping language that R2D2 could probably understand, the tip begins emitting spider web-thin filaments of melted plastic onto the glass, layering them one atop the other in a slightly different shape each time, building the object from the bottom up. “It’s like I’m looking at an artist work. Even though it’s just doing what it’s told, it’s fascinating. Like, how does it know how to do this?” 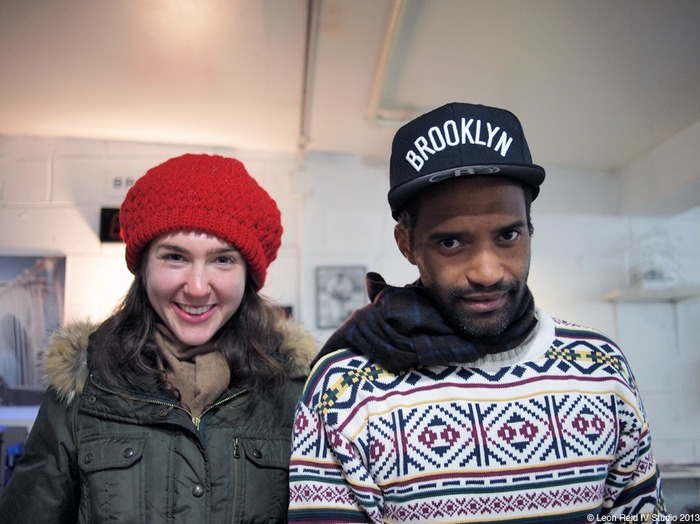 After about fifteen minutes, a pair of feet begins to emerge, which grows into legs, then a waist, and then the printer glitches, and the waist begins to move off-center as layer after layer gets laid incorrectly atop an error. The figure is trashed, and Reid is frustrated. Still in the infantile stages of technological development, the printer messes up often, and a large part of the art of using it is figuring out how to circumvent its pitfalls, developing techniques to maximize its efficiency and have it print properly as often as possible.

If done correctly, the action figure-sized man would have taken one hour to print. With no errors, the full work – 22 men circling three-deep around one man – would have taken 23 hours to be printed. Using traditional methods, Reid would have spent days molding a figure out of clay, then make a two-part rubber mold of the figure and, finally, resin replications of the mold. The detail on the figures would have been less; the cost of materials, much higher. Air bubbles that form during the casting process come as often as the printer’s glitches. 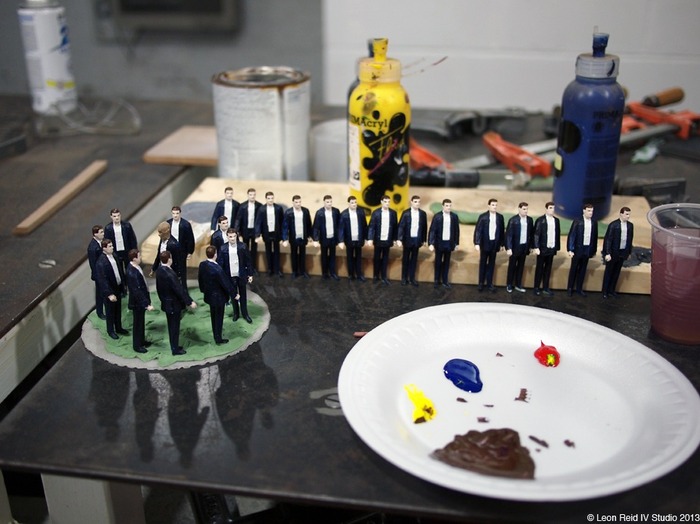 Reid hand-painted the figurines in The Isolation identically, with the exception of the skin color of the man in the middle – his way of making machine-made replicas into a piece of art that has a visible human connection. With a wife, a daughter and Brooklyn rents on the rise, he doesn’t have the option of holing up in his studio and using a magnifying glass to chisel each eyebrow hair out of his perfect clay figurine, though if he could, he would. Nevertheless, printing is not sculpting, and the new medium is changing his thought process, which, in turn, is changing his work – ideally capitalizing on the efficiency of the computer-made without losing his personal touch.

He’s showing “The Isolation” alongside a couple of other printer-made pieces at the Fountain Art Fair in Manhattan at the beginning of March. For now, the works are for sale (editions are produced more easily by re-printing than by re-sculpting), though he hopes to eventually incorporate the technology into his larger-scale public works. The more he refines the new technique, the more his output will begin to catch up with his mindset. More ideas realized, more art to give to the public – more is more. 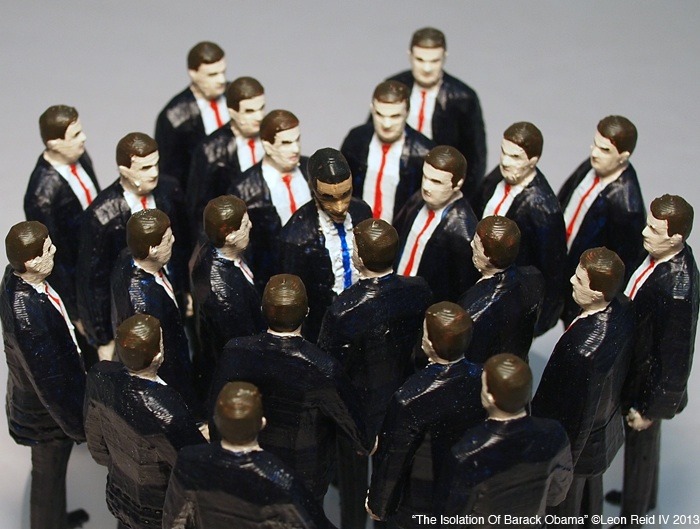 “Did the printing press take away from the writing integrity of the scribes? Not really. It changed the illiteracy of the mass population. You’d think it’d make everyone a writer, but not everyone is a writer. Like here – anyone can print a face, but it doesn’t make you an artist.”

Perhaps the price of being a traditionalist living in Brooklyn is only as much as the patience it takes to master a modern technique.

(All images Courtesy of the artist)