The Sochi Project has come to America and now, concurrent with an exhibition in Antwerp, is on view at Chicago’s DePaul Art Museum. (Golden Years: Rob Hornstra's Russia is also concurrently on view at Huis Marseille in Amsterdam; read Edo Dijksterhuis' review here.) In the project, Dutch documentarians Arnold van Bruggen and Rob Hornstra tell the story of Sochi, the Russian city chosen for the 2014 Winter Olympics, and its surrounding regions. Since 2009, van Bruggen and Hornstra have built the story in a variety of formats: a multimedia website, regular book releases, a deliberate social media presence, a fluid and rentable exhibition, and now one final, stupendous book from Aperture Foundation, weighing nearly six pounds with over 400 pages.

The two authors tell stories, and more stories, and more. With the project, they’ve created a complex social history grounded firmly in humanism. Which isn’t to say that van Bruggen and Hornstra have skimped on their research. Facts and maps pepper the story, enough to keep the reader informed, never enough to break the narrative flow. There’s something reassuring about the pacing and presentation of this approach. It’s not a series of infographics. It’s not a cute/frantic two-and-a-half minute animation. It’s not motivational talk, or a scientific report, or a poetic, artistic response. It’s a story being told by two people who are willing to be respectful, to pay attention, and to honestly show us what they’ve seen. 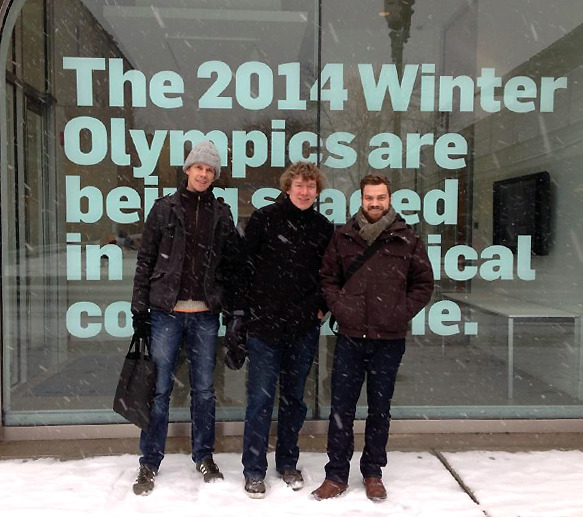 James Pepper Kelly: How did you choose Sochi for your collaboration?

Arnold van Bruggen: We had been traveling through Georgia and Abkhazia, these desolate conflict areas with refugees, and when we got back we heard that Russia had been awarded the Olympic Games. So we thought, wow, what a chance. We could make stories that people normally don’t find appealing interesting because the Olympics would be in the vicinity. We had a deadline and an opportunity to make a broader audience more acquainted with this region.

Of course, during the process the whole idea of the Olympics became weirder and weirder. You can ice skate on a sub-tropical coastline, because you can also go skiing in Dubai, you know? Everything’s possible these days. Of course, everything had to be built from scratch and that’s what’s cost so much money, like $60 billion by now. The stories about human rights issues in the North Caucasus, and the violence—it became more interconnected and interesting than we could have guessed in the beginning. 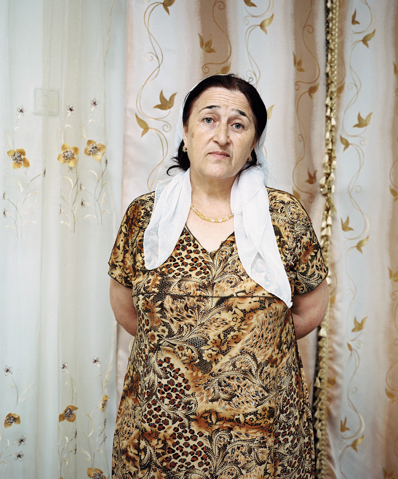 JPK: You cover so many stories across the project’s different formats. Is there a single, individual story that you each look back on and remember the most?

AvB: Yeah, it’s really hard to make a choice. But I really like the Khava story because it’s about a very strong and beautiful woman who was caught in the middle of all this. She encompasses all the history of the North Caucasus in her family history. And I really like the wrestling one as well [Life here is serious], all these boasting Dagestani men make for a good book. So many favorites, actually, it’s really hard to make a choice and they’re impossible to compare. As a writer I maybe I prefer the Khava book [The Secret History of Khava Gaisanova], but as a consumer, I think the wrestling book is fantastic.

Rob Hornstra: I think I agree with Arnold. The Khava book, which I consider the North Caucasus book, is really what I think I’m most proud of because it was the biggest challenge. Russia tries to control the North Caucasus and the journalists going over there. It’s a neglected area and we struggled with how to represent it for a very long time. Finally, we made this book and I thought, yes, this is the feeling people should get about the North Caucasus. This is really what we felt there.

I think one of the most important pictures is of Hamzad. I think it’s a very aesthetic picture: this completely ruined man and his small, beautiful, innocent daughter. But what’s important for us is the background story. This was a very, very nice guy. He used to be a policeman, but now he’s just sitting at home. The only thing he could do, because he’s blind, with one arm and no legs – he did have a new baby, by the way, so he can do at least one other thing – was listening all day to the radio and to his children, his family. So his children really loved him, because he was listening and talking all day to them. Besides that, he also knew about the political system in Holland, because he was always listening and absorbing everything that came in. 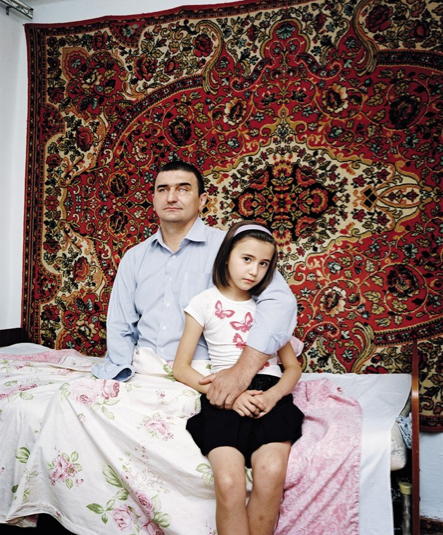 AvB: And that’s very bizarre for anyone outside of Holland!

RH: Yes, it’s completely bizarre! Especially if you’re in remote Ingushetia in the North Caucasus. On the one hand he was very angry, very bitter about his colleagues, that he jumped on this grenade, these kinds of things. On the other hand, he still had a kind of spirit. He looked a little bit as if he could live with his limitations. He was stuck there but he had new goals: “I want to know everything about the world, I want to listen to my children, I want to hear what they are drawing and painting at school, what they know at school.” So when we were driving back from his house we were both like, this is a really heavy interview. So we were sitting back and thinking, what can you do for a guy like this? So we thought we could give him these recorded books, audio books. But we cannot enter the country anymore so we can’t bring them. We have the audio books. The only thing is we need is a visa from Putin again and we can bring them in.

JPK: The Sochi Project, as a story, exists in so many different formats: a multimedia website, a series of books with different themes, a final book, a traveling exhibition that shrinks and grows… When you two look at the project now, do you identify it more strongly with any particular format?

RH: The first thought is that it might be a book.

AvB: But that’s because we’re both book lovers. It actually started as an online project. We made this website – it was a crowd funding website – and we put all our stories on it. And we made a sketchbook, and we made a blog about how we worked and what we did. And then of course we had to award our donors. We made a very small book, Sanatorium, it was really not like a book, more like a cahier, a booklet. And then the second year we made a huge book, Empty Land, Promised Land, Forbidden Land, and we liked it enormously. And to our surprise it immediately sold out. So from this website project it immediately started to become a book project. Now, the website is a less important way of describing the work than all the books together. 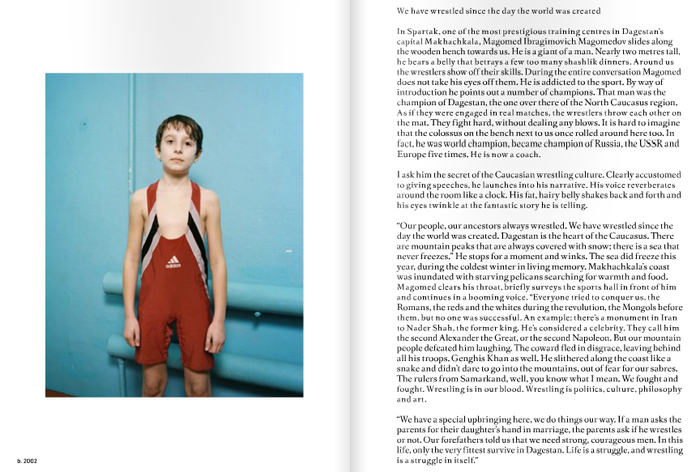 Arnold van Bruggen and Rob Hornstra, excerpt from “Life here is serious”; Courtesy of the artists.

RH: But I think it shifted during the project—it also became a social media project. I think we used Facebook in the right way, by not only promoting the project, but by posting a picture of the week, a short story, real content. We discovered that people don’t like when you say, like, “We’ve been published again,” or whatever. We built up a group of dedicated followers on social media. So it’s not only offline. We have rental exhibitions, we work on traditional media publications all the time, our own website, social media—yeah, all kinds of things. That’s the great thing about this time, you can combine all this together.

JPK: Did you see the project becoming this complex when you started?

RH: Ambitious—I mean we were not just starting, but we were absolutely not established. I think we’re still not established, but we’re a little bit further than five years ago. But nevertheless, we were extremely ambitious, that’s true. But actually, we did exactly what we said we were going to do in 2009.

JPK: I’m curious about how the text and images work together. How do they work together for the stories that you’re telling?

In the end, often the problem with photography and with artists, and this is a little bit of a different point, is that they place themselves on a higher level than their work. And I think in our case, the work is the most important. It doesn’t matter if Arnold does the major part, if I do the major part, or if Kummer and Hermann, the book designers, come in to contribute. This thing, the book, has to be magical, and we all contribute to it. 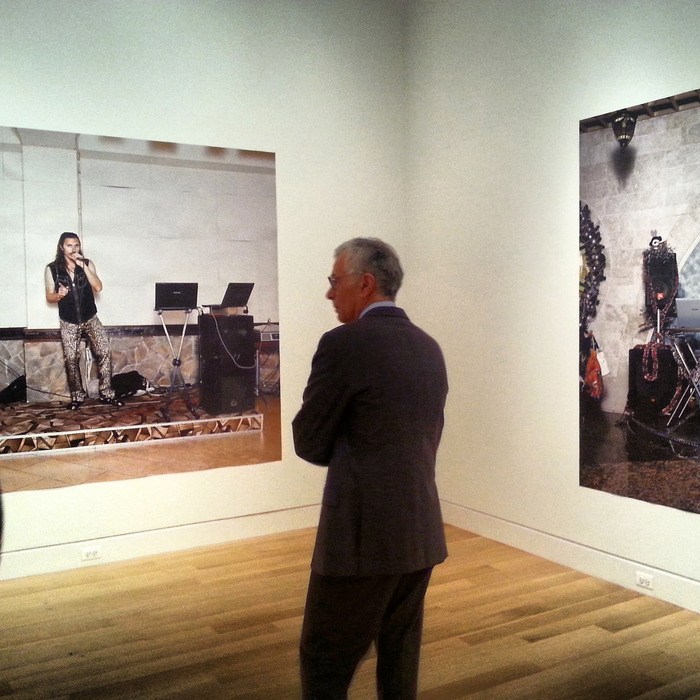 Installation view of The Sochi Project at DePaul Art Museum.

JPK: As collaborators, how often do you disagree, and how do you resolve it when you do?

RH: I think very often, actually. We often agree, but we also very often disagree. We don’t actually resolve it, do we? We just finally choose something.

RH: I mean, it’s not that we disagree on…

RH: No, it’s not on the crucial things, like what kind of story we want to tell. In the end you’re both completely involved and could spend your whole lives on the story. No, for example, I want a red cover and he wants a green cover. In the end there’s a lot of fighting and you choose red or green, and you accept it and it’s okay. The concept is still the same. And we fight often with Kummer and Hermann too. Sometimes they go more in my direction, sometimes they go more in Arnold’s direction.

JPK: When your visas were revoked, were you surprised?

RH: I was surprised, yeah. I was surprised that they were denying, as I see it, two unimportant journalists. We’re not working for The New York Times or for big media. If you’re thinking in a smart, logical, way then you say, give them the visa. Because if you don’t, then you give them free promotion for their project, which is what happened. So yeah, I was surprised by the stupidity and by the fact that it was us. I mean…

AvB: We saw so many signals as well that they wouldn’t allow us any more. We were called to the Ministry of Foreign Affairs, we had to come there and pick up our accreditation. And we got this speech that we couldn’t do the things that we were doing anymore. So many things happened before, but somehow we didn’t expect it.

JK: At that point had you finished with the project?

RH: Yes, Arnold and I both became fathers in the last two years, and I think it was two years ago that we made a complete schedule from there till the end. And within the schedule it’s totally clear that the last trip was in May, 2013. So when I got the visa rejection in July, I didn’t think, “Oh, there’s our project.” It was only, “Oh, it’s a pity we can’t go back.”

(Image on top: Arnold Van Bruggen and Rob Hornstra, screenshot of the top of The Sochi Project’s website; Courtesy of the artists)