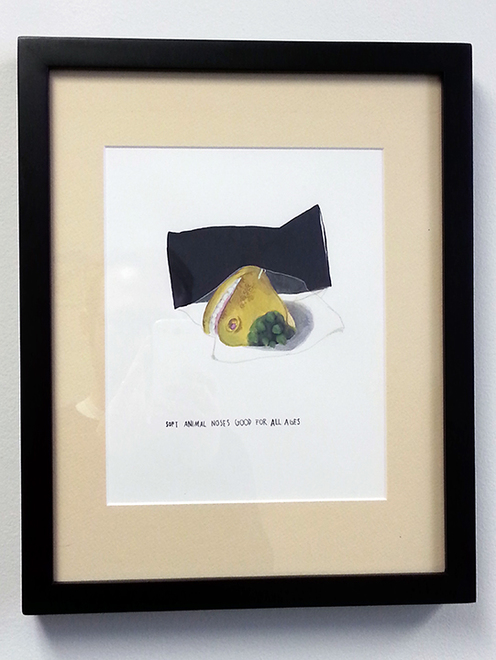 Where They’ll Take You: Offbeat Art Sites in the 2nd City

For C. S. Lewis it was a wardrobe. For Lynn Reid Banks, a cupboard. Max, in Maurice Sendak’s most famous book, sets sail to the island of the Wild Things from the confines of his own bedroom. Though adult narratives focus less on magical transportation and metamorphosis, when they do they also often look to constrictive spaces. Toru Okada, the protagonist of Haruki Murakami’s The Wind-Up Bird Chronicle, searches for visions from the bottom of a dried-up well. In Being John Malkovich, the portal to the center of the actor’s mind lies through a series of increasingly diminutive spaces, one nested within the next like Russian dolls: on the 7 ½ floor of an office building, behind a filing cabinet, through a small door, down a crawlspace.

Last month Jerry Saltz resignedly bemoaned the dominance of “mega-galleries” around the world; in Chicago this September, Kavi Gupta CHICAGO | BERLIN added 8,000 new square feet of exhibition space in the West Loop. As gallery expansions and bigger spaces proliferate, as tired debates pitting art against the market are whipped to their feet like circus animals and pitilessly forced to go through the same empty motions day in, day out in coffee shops and classrooms, from dusk to dawn in dive bars, in dorm rooms, attention should be paid to the positive aesthetic implications of experiencing art in smaller spaces. These are, after all, the type of spaces that we imagine can change us. 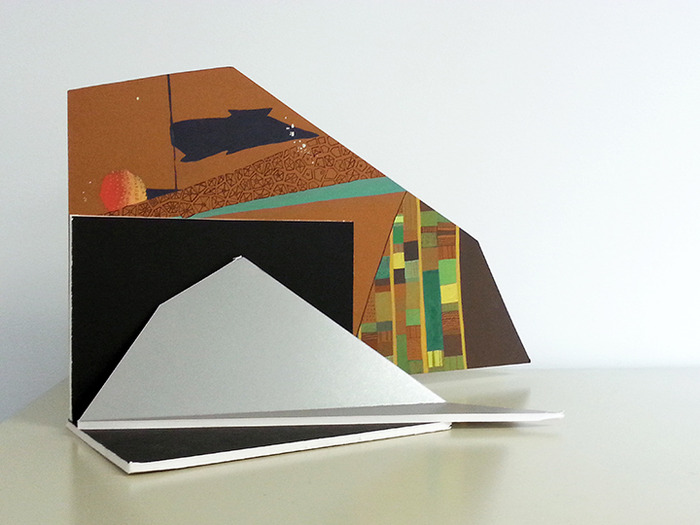 This review focuses on three small galleries with that potential. Coincidentally, all are currently showing artworks that also present the possibility of transformation/transportation. These works, in these spaces, open up worlds beyond the scope of the standard gallery.

D Gallery is located in the office of Philip von Zweck, the Academic Manager for the Art + Design Department at Columbia College Chicago. The current exhibition features the work of Caroline Picard, an artist, writer, curator and all-around arts activist. According to the show’s statement, “…Caroline Picard installs a series of visual models, notes and computations in an effort to trace the transformative animal potential in art and space.” The work on hand consists of a take-away zine, “Wherecoyote: an alternate account of what took place between joseph beuys & the coyote”; two framed illustrations loosely depicting animals; and four 3-D collages.

Picard’s work blurs lines, formal, aesthetic, and psychological. Geometric forms merge into unconstrained fields of color, while a detached animal nose is promoted as an object “for all ages.” One collage suggests both a pinball machine and a topographical map of a garden, both highly orchestrated but sliding into chaos. Another, jagged, with cones, blocks, and a mushroom cloud reaching off the plane of the work itself, points to the unconstrained cycle of nuclear fission. 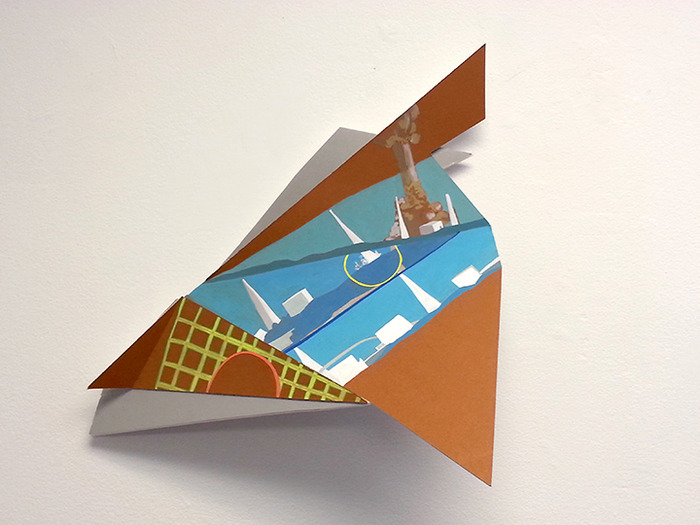 Picard’s work is fantastic in the old sense of the word, with hints of the bizarre and uncontrollable and implicit threats abounding. It’s dark in the way of old fairy tales and, often, equal parts winsome, ordered, and disturbing. In some cases Picard draws on expected tropes, as in an illustration of a human seemingly crossed with a horse (according to von Zweck, a YouTube reference). In more dynamic pieces, such as the nuclear collage, she takes a marker of scientific modernity and uses it to undermine the idea of stability at its foundation.

The zine, “Wherecoyote”, pairs these aesthetic strategies with an extended narrative. Joseph Beuys, his soul fractured, searches for the missing shard and tries to catch it within a coyote. He spends several days lost in hallucinogenic rituals in a cheap motel with the animal. His attempts end badly. Stylistically the zine (and much of Picard’s additional work) is similar to artist and musician C.F. (Christopher Fourges). Is it too much to hope for a collaboration?

D Gallery is small enough that the work forces itself on the viewer, square enough that the angular collages break up the plain walls like stained glass in a convent’s walls or stale jelly on bright, white teeth. It’s the perfect size for disruption. 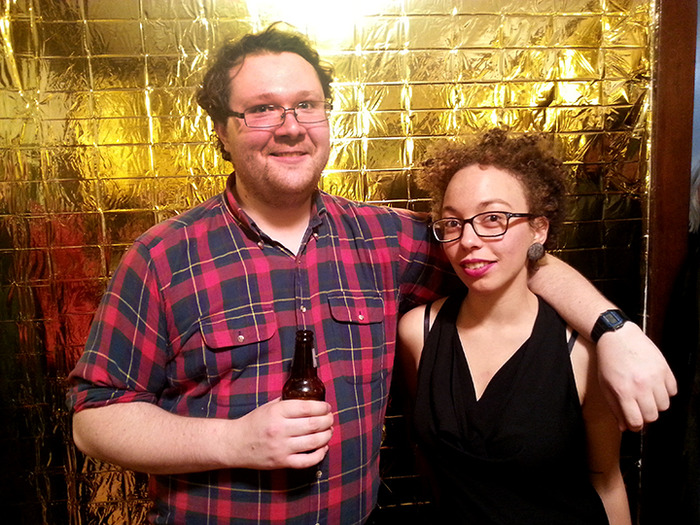 Kirk Faber and Erin Washington at the opening of Don’t Breathe Too Much.

Kirk’s Apartment is one of the more venerable apartment galleries in Chicago—unfortunately Erin Washington’s exhibition is the venue’s penultimate show (the final one will be Diego Leclery’s this December). Kirk’s Apartment is run by Kirk Faber, an artist who graduated from SAIC’s BFA program in 2012, and the exhibition space consists primarily of the living room of his Roscoe Village apartment. The work on hand for Don’t Breathe Too Much comprises four pieces: an installation, an acrylic/chalk piece, a video, and a sculptural object.

Washington is a 2011 MFA graduate from SAIC, and the acrylic/chalk piece, Perfect Brothers, is a signature project of her practice: a word is written, erased, and rewritten or replaced on a chalkboard over an extended period. This particular iteration, in a nod to the synchronicity of Felix Gonzales-Torres’ Untitled (Perfect Lovers), features two chalk boards with a pair of words, one written by Kirk Faber and one by his brother Cullen according to guidelines supplied by the Washington. The final words—“yes” and “ok”—were agreed on by both brothers. Other versions of the project have appeared in a number of exhibitions, and the final results are dependably engaging.

The other three artworks use futuristic tropes to describe classic themes, the future environment they suggest closer to yesterday’s tomorrows than to contemporary visions of 2099. The installation piece—golden space blankets covering the walls of the living room, reflecting heat and lowering cell phone signals—recalls the 1970s. It’s a strange mix: part disco, part Solaris, part Danaë’s room after her seduction by Zeus in the form of a shower of gold. Nostalgic, anxiety-inducing, and just a bit tragic.

Installation view of Don’t Breathe Too Much

Equally strong is the video, a short loop from the 1968 film 2001: A Space Odyssey in which astronaut Frank Poole is disconnected from his spaceship and, sans oxygen, begins tumbling into space. To create the piece, Washington projected the film and, lying on her back, videotaped those few seconds. In effect, she has created a handmade GIF, recognizable as such by the slightly skewed angle and the much deeper black of one corner. It’s a beautiful pairing of craft and new media, and it echoes the emotions of the installation.

The final piece, a dog-eared, paperback copy of Viktor E. Frankl’s 1946 book Man’s Search for Meaning now sprouting polyurethane, an apparent stand-in for space mold or the unstoppable, ectoplasmic force of life, is an off-key addition to the show. No matter. The untitled installation and video are a mesmerizing duo, a visual Delorean for a soundtrack of David Bowie, and Lou Reed (RIP), and maybe even Spiritualized. 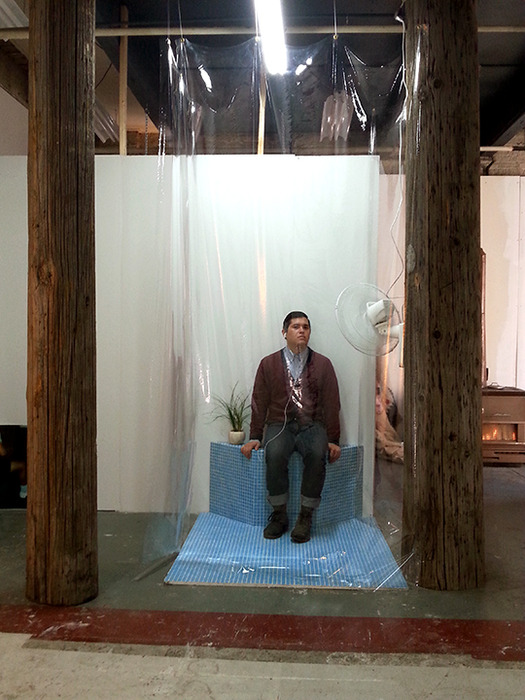 South of the Tracks founder Alex Tam experiencing the installation A One Dollar Bill Floats Face Up.

South of the Tracks is a studio gallery run by Alex Tam, a 2012 BFA graduate from Columbia College. The gallery itself is located in the outer rooms of a studio that Tam shares with fellow Columbia graduate Colin Hatch, in the same East Garfield Park building complex that houses the area’s defining gallery, devening projects + exhibitions. Greetings From Under The Table, a solo show from 2013 BFA graduate Caroline Gohlke, is the space’s inaugural exhibition.

The show is messy. And young. And, perhaps because it is so unpolished, genuinely exciting. It is comprised of glossy panoramic prints, a couple of sculptural works, and two large installations, one featuring found video, the other music on an iPod. The show is a meditative evaluation of the artist’s father, with emphasis on his terminal illness during the artist’s early teenage years. As a whole the show does not aim for transportation or transformation as the two reviewed above do, with one extremely notable exception.

The exception is not in Gohlke’s photographic prints, which are lo-fi and uncanny but come across as ultimately unconvincing, especially when compared to similar work in Oli Rodriguez’s The Papi Project (which, interestingly, is also an effort to re-evaluate an inaccessible father). Gohlke’s sculptural work is more successful, and there’s a definite correlation between the artworks’ effectiveness and their simplicity. A yellow-bulbed lamp near a small shelf that holds a glass of deep red juice with two straws in it; the lamp is banged-up, the juice glass antiseptic. It’s a perfectly descriptive translation of long-term illness.

(Only now, writing this, do I see the piece’s entirely superfluous title: Melanoma.) 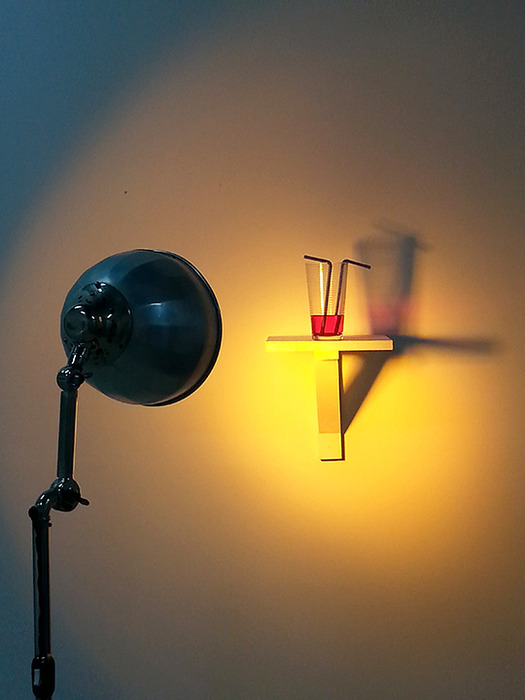 The standout piece of the exhibition is an interactive installation featuring a blue tile floor and ledge for sitting, as in a large bathroom, surrounded with clear plastic walls; a small, perfectly dismissible plant; a cheap wall fan, aimed at the participant’s face; and an iPod with earphones playing the 1974 Harry Nilsson/John Lennon cover of “Many Rivers to Cross”. It’s remarkably simple and it handles the emotional complexity of mourning with adeptness, bringing together theatricality, boredom, insistent physicality, cliché, and very genuine sadness all at once. Sitting there, behind the transparent curtains, with hair blowing back and the band's chords breaking loud, you’re in a house full of cheap furniture and beige wall-to-wall carpets, old yellows and wood paneling everywhere, the kitchen stinking of chicken, plastic drapes three-quarters across the low windows. The music is such a cliché, but at least it makes you feel something other than dust and hopelessness, and here in the bathroom there’s running water—but you’re just acting now! …right?

Gohlke’s other installation, Place of Solace (featuring Jerry Hodak) is overly “weighty”, though there are a few nice touches. Overall, her show engages with notoriously difficult subject matter and manages to do so with honesty and insight.

Mega-galleries and gigantic art fairs tend to be de-saturated, self-aware venues that all but render the artworks they contain invisible. These galleries, they may pop-up, disappear, come and go like fair-weather friends and flowers, but as venues for viewing art they can’t be beat. This is especially true beyond the openings. Everyone’s schedule is crazy, there’s not enough time to do half the things you should, let alone the things you want to. So try this: instead of checking off the list of regulars, do a little research. Find a small art space in your neighborhood. Go to it. See art. And expect to end up somewhere else, someone else, restored.

Posted by James Pepper Kelly on 11/23/13
RELATED ARTICLES
COMMENTS (0)
ArtSlant has shutdown. The website is currently running in a view-only mode to allow archiving of the content.