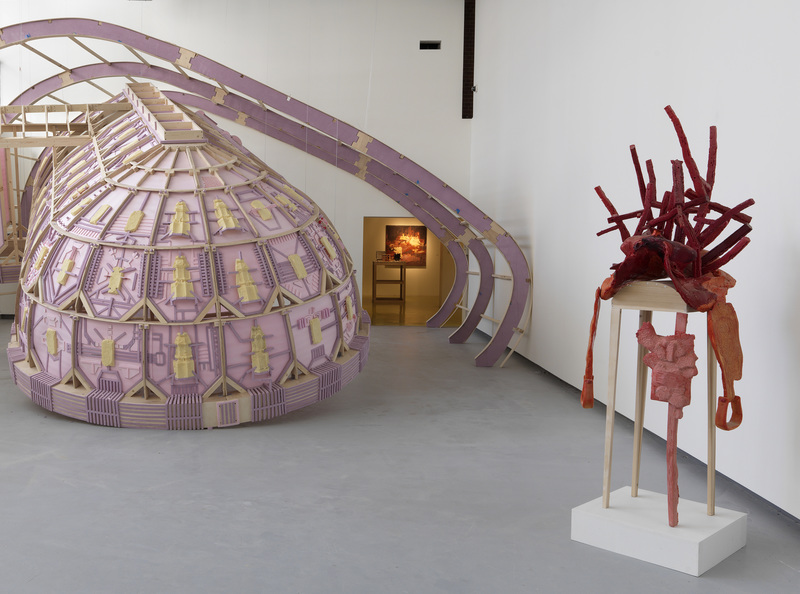 The critical pedagogue Henry Giroux tells us that objects placed in front of us in the public sphere operate as forms of public pedagogy—meaning that they communicate and reinforce certain cultural narratives, hierarchies, and social mythologies. These image | objects seek to teach us about our collective past and present regardless of accuracy or consensus. As cultural reflections and representative image | objects, monuments serve as cultural mirrors and the sites in which they are situated serve as part of a broader cultural commons.

Jeremiah Hulsebos-Spofford’s Hall of Khan is an attempt to question monuments and frame them through artistic sculptural representations of the artist’s own research and interests. In the works arranged, the artist has examined power, truth, knowledge, pedagogy, and cultural semiotics. Each form takes on different iconic treatments; examples include ancient tablature, architecture, the equestrian figure, and pedestal-based sculpture. Inside the exhibition space viewers encounter brightly colored cast foam molds, wooden fixtures, and abstracted found objects. Two large built structures flank both entrances of the space. The first is a horse stable entitled Stall and the second is a larger suspended form entitled Hall (i.e. Hall of Khan). The Hall form is based on 19th Century European palatial structures like the Crystal Palace in Hyde Park of London and the Grand Palais in Paris. The stable is a minimalist form built for interactive exhibition programs where live horses will be brought in for specific actions and learning. On the day of the opening two horses were used, one for Elijah Burgher’s performance (a kind of living monument that mocks the Ralph Lauren Empire) and the other to carry a three-foot lime green saddle (Green Screen Googie for Italo Calvino). Both structures are like homes. Stall serves as a house for horses and Hall serves as a reminder of the great halls that housed and still house special objects of cultural significance. Architectural monuments and museums function as caretakers and shelters for objects as well as spaces of human memory. Hulsebos-Spofford has taken care to sharply craft, represent, and replicate the feeling of great halls, only his are empty. “Hall” serves two meanings: Hall of Khan the exhibition title is full of many objects, yet Hall the actual form itself creates a void that visitors can approach, enter, and exit. The artist has created then, two spaces in one. The first consumes us (the hollow Hall structure) and the second, allows us to consume it. 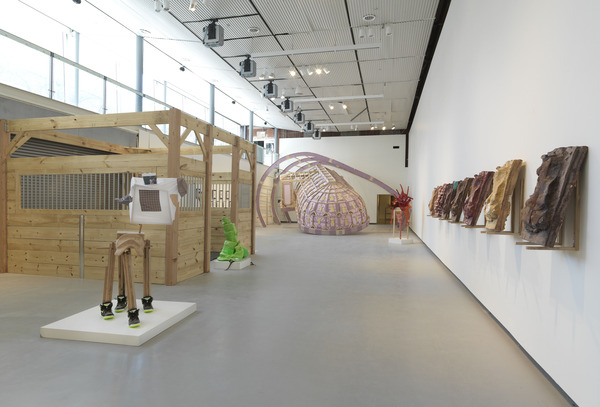 The exhibition title Hall of Khan gets its name from the artist’s research of the 2008 Genghis Khan monument in Mongolia. Khan as we know was a tyrannical emperor, but with the passage of time, his conquests are made less severe and he can now become a source of tourism revenue for capitalist Mongolia. This research led Hulsebos-Spofford to a specific investigation of equestrian monuments, which is a historically popular genre of monument-making where particular figures of interest are both symbolically and physically mounted on horseback (literally seated in positions of power). There is a connection here between thrones and saddles that is worth thinking about as the role of the saddle recurs throughout the exhibition. Here the artist asks us to consider who is powerful enough to be positioned this way and who is powerful enough to make such grandiose gestures? In a recent talk at the Art Institute of Chicago, Kara Walker mentioned her work as “saddling up to power,” which invokes an image of the artist as a powerful communicator of ideas. This notion that artists ask meaningful questions in their work as a form of cultural power is nothing new, but is worth considering as we think about how art can teach us new things and communicate an artist’s ideas to a wider public. Hulsebos-Spofford openly admits that it is a tall order to deconstruct such monumental objects and that this investigation is an exercise to claim and demystify power. The artist as powerful image | object maker should resonate with all of us as we too possess the agency to question power.

The works on display range in sculptural form and conceptual meaning, moving from the grand and abstract to the personal as the artist seeks to place his own memories in positions of power and ask others to consider how truth and power commingle with memory and historical fact (or non-fact). The exhibition visually reads as sculptural forms arranged in a small galaxy of abstract 3D collage and assemblage—works strewn about in carefully curated yet haphazard organization. In White Men Can’t Jump, the artist references the Billy Ho character played by Woody Harrelson from the 1992 basketball hustler film "White Men Can’t Jump." The same black Nike’s, shirt, and hat pattern worn by Harrelson are invoked to signal how the popular film indicated one of the first moments the artist became aware of racial stereotypes in popular culture. The film resonated with the artist as the plot (a pick-up basketball game) became an unlikely setting for an interracial friendship between the characters. A similar expression takes place in Maid, a bright orange-red saddle monument with charred amber-like stakes that surge upward out of the top of the piece. Here the film “The Passion of Joan of Arc” from 1928 starring Renée Jeanne Falconetti is invoked as another memory of the artist and his cinematic encounter with the famous heroine being burned alive at the stake. In the silent film, striking images of the body being burned alive alongside the compassionate reaction of the town’s people communicate the horrific death and the public remorse for capital punishment. The monument serves as a reminder of what power can do. It also reinterprets the many Joan of Arc monuments found around the world. 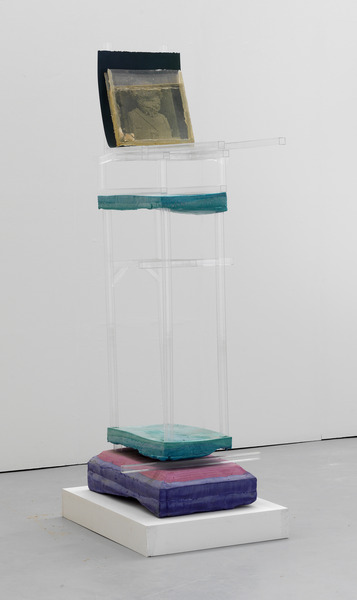 Abstraction, in the contemporary sense of the word, hangs in the air over this exhibition in that Hulsebos-Spofford seeks to demystify the real and representative issues surrounding monuments through abstraction. It is all very meta in that we have an artist making abstract sculpture and spatial collage about the monument with abstracted historical and cultural meaning that complicates the sculptural genre of the monument. For me, this is an exhibition about gaps as much as it is about the formal aspects of contemporary visual art, sculpture, installation, and collage. Conceptually the artist is dealing with representation and abstract meaning as it is situated in our collective imaginary. As people who interact with public spaces, the artist teaches us to think, question, and intervene. Monuments ask that we acknowledge and remember things that we do not know—they are stopgaps in time.