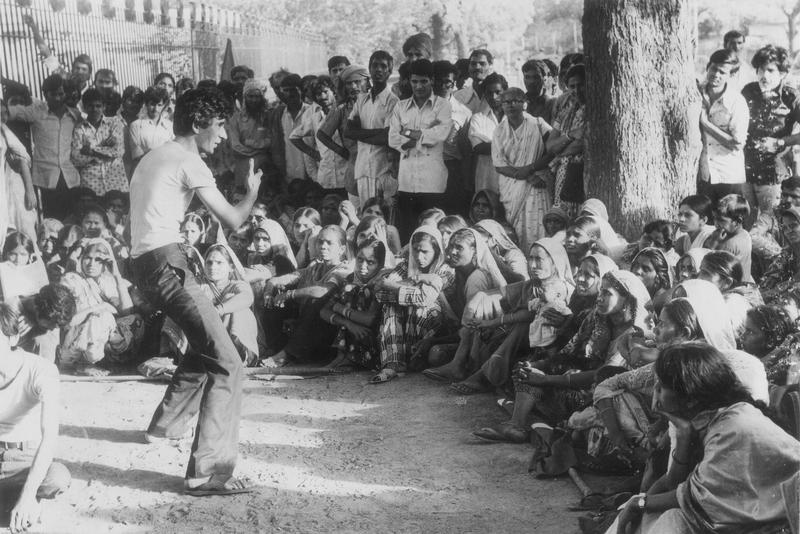 The Sahmat Collective: Politics and Performance in India

Mounted on a red wall, a large black-and-white photograph of a funeral procession carrying a coffin draped in a hammer and sickle flag greets visitors to The Sahmat Collective: Art and Activism in India since 1989. This striking first visual and the room that follows set the premise and tone of the exhibition with plentiful wall text, reading materials, and documentation to supplement and contextualize the work to come. The exhibition introduces an American audience to an Indian art collective born in the wake of the murder of Safdar Hashmi (1954–1989), a political activist, playwright, actor, director, poet, and Communist who co-founded the street theater group Jana Natya Manch in 1973. Both Hashmi and Jana Natya Manch were dedicated to secularism and egalitarianism in the face of immense class, caste, cultural, political, and religious divisions in India. Hashmi was attacked while performing a street play in Ghaziabad near Delhi and subsequently died of his injuries. In the nationwide outrage against political violence that followed, Sahmat was founded to memorialize Hashmi’s life and carry on his work, being an acronym for the Safdar Hashmi Memorial Trust and meaning "in agreement" in Hindi.

The key factor uniting the diverse work and members of Sahmat is its secular and progressive mission to defend freedom of expression, battle sectarianism, and promote democracy, tolerance, and pluralistic harmony. Including over sixty artists––ranging from street performers to internationally acclaimed artists like Subodh Gupta––curators Jessica Moss and Ram Rahman structured the plethora of work on view by dividing the exhibition “into twelve case studies of key themes and projects” presented in chronological order. The experience of walking through the show may be more roughly divided into three categories: historical and background narrative, documentation and ephemera from public art projects and performances, and contemporary works of art. 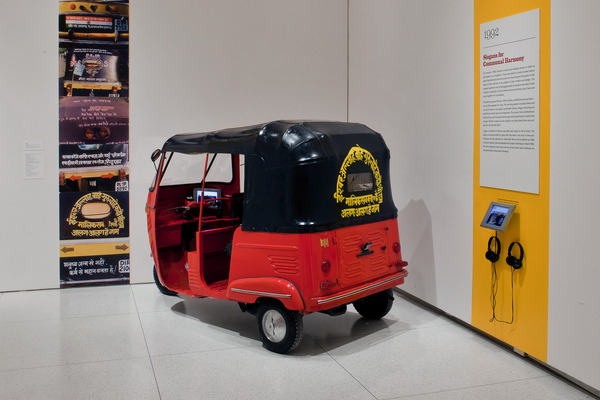 Installation view of Slogans for Communal Harmony, 1992, hand-painted auto-rickshaws with poems about brotherhood.

The exhibition begins as an educational and historical presentation of the collective that, at least initially, could almost fit as appropriately in a venue like the Field Museum. This quickly moves into ephemera and documentation of public projects such as Slogans for Communal Harmony (1992). Sahmat organized a competition for auto-rickshaw drivers in Delhi to paint poetry and slogans about communal harmony and brotherhood on their vehicles, building upon an established tradition of drivers writing personal statements on the backs of their trucks and taxis. Over two hundred participants gave up a day of pay to come together for the competition judged by a jury of writers and artists, and the resultant slogans could be seen on vehicles in Delhi for years to come.

Sahmat operates upon the premise that art may effect social change. To this end, as Walter Benjamin wrote, “Rather than ask, ‘What is the attitude of a work to the relations of production of its time?’ I should like to ask, ‘What is its position in them?’”[1] In other words, instead of simply deeming art political because the creator or the overt message claims it is, we must recognize that artists do not stand outside economic, social, or political systems but create work very much from within these systems, from production to reception. This relationship often proves estranged and problematic for politically motivated artists working within the gallery system––as some of the artists represented in the exhibition do––in which production and reception are generally separated by location and anonymity of audience. However, it strikes an appropriate balance in the contextual specificity of the public projects associated with Sahmat in which creators, venue, and audience are wholly imbricated, as evinced in Slogans for Communal Harmony. 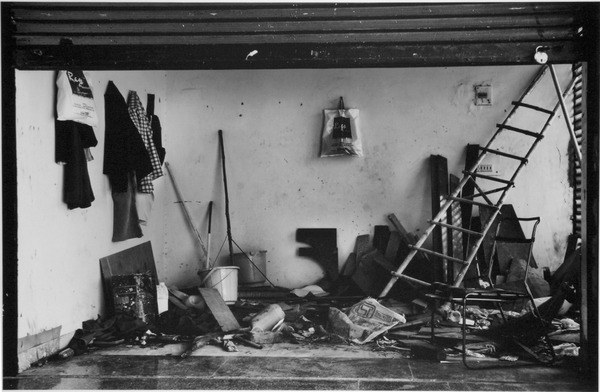 About halfway through the show, the curatorial tone shifts from historical narrative and documentation to what feels more like a contemporary art exhibition. Two-dimensional, photographic, and installation work dominates the final galleries, with video documentation of musical performances at the end. Gigi Scaria’s Details of a Personal History (2007) was created for Making History Our Own, an exhibition organized by Sahmat to commemorate the first uprising against British rule in India in 1857. Scaria responded to Sahmat’s request for participating artists to contemplate how personal histories form part of a larger history by photographing workers’ personal effects left in a mall showroom under construction. Within this seemingly simple photograph––reminiscent of Jeff Wall’s The Destroyed Room (1978), which, in turn, is based upon Delacroix’s Death of Sardanapalus (1827)––the relationship of personal to historical narratives becomes manifest. In Scaria’s words, “That was when I felt that personal history also leaves marks that will never be traced back by the ones who made them.”

The Sahmat Collective is difficult to mentally encompass in a single visit due to the amount and diversity of work, as well as the amount of context needed to understand the work. The overarching goal of the exhibition seems to be both to officially document the collective’s history and to introduce it to an audience outside of India. This is no small challenge. Many artists associated with Sahmat fluidly adapt both Indian and Western traditions to suit their needs and visions. Using my own Eurocentric art education as an imperfect gauge of an American audience’s experience, the latter part of the exhibition containing artwork made to be shown in galleries is more familiar and thus more readable than the public projects taken out of the contexts of their production and reception. However, this is less a criticism of the exhibition and more of my own affinity for work engaging Western modern and contemporary traditions. Optimistically––and in opposition to curatorial trends in many Western art institutions[2]––the Smart Museum’s exhibition can expand narrow and problematically Eurocentric views of art history and contemporary art. Like the collective itself, the exhibition embraces the diversity and complexity of its content and context.

Extensive public programs and film screenings are scheduled in conjunction with The Sahmat Collective. Videos concerning the history and context of Sahmat may be viewed in the exhibition or online. An exhibition catalog, organized by project and including images, articles, essays, and interviews with artists, is available for purchase.

[2] G. Roger Denson incisively critiqued the MoMA’s current exhibition, Inventing Abstraction, 1910-1925, which showcases early twentieth-century European artists who “presented the first abstract pictures to the public” and denies established non-European and non-modern traditions of visual abstraction. Meanwhile, further north on Manhattan Island and on the other end of the spectrum of approaches to art history, the Guggenheim’s Gutai: Splendid Playground brings together work by an influential postwar Japanese collective, challenging a view of the West as the center of avant-garde and contemporary art, according to Ellen Pearlman’s review.