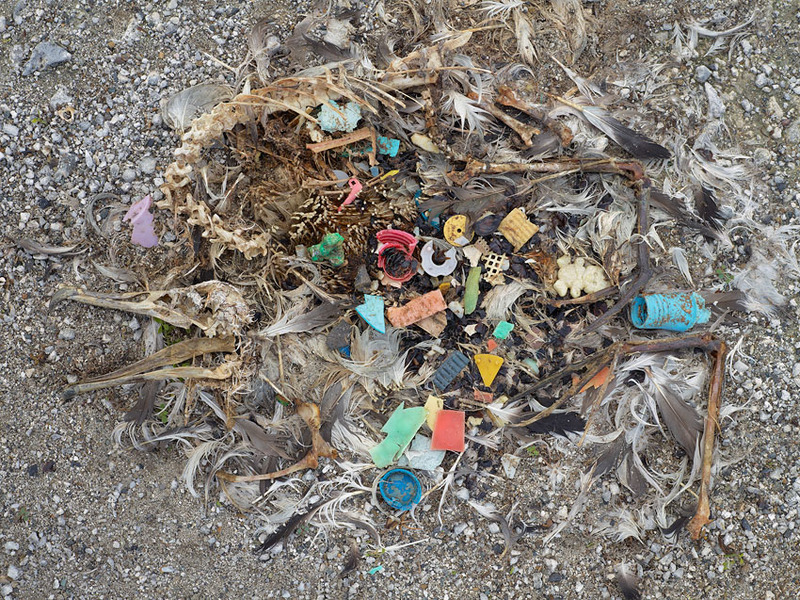 Climate of Uncertainty at the DePaul Art Museum is one of the latest iterations of a timely and increasingly surveyed theme in contemporary art and exhibitions: climate change. Featuring twelve artists and occupying both floors of the museum, the exhibition operates under the premise that artists engaging environmental issues in their work have the power to challenge, inspire, and instigate viewers to action. The educational and activist impulse evident throughout the space is most apparent at the entrance. Daniel Shea’s Coal-Fired Plant (2007) acts as the show’s title piece, next to which is an animation created for the exhibition by the collaborative research and efforts of DePaul faculty and students in the Environmental Science and Studies Department and the College of Computing and Digital Media. CO2: Certain Challenges succinctly outlines the impact of fossil fuel emissions on the carbon cycle and is by far the most literal work in the show. 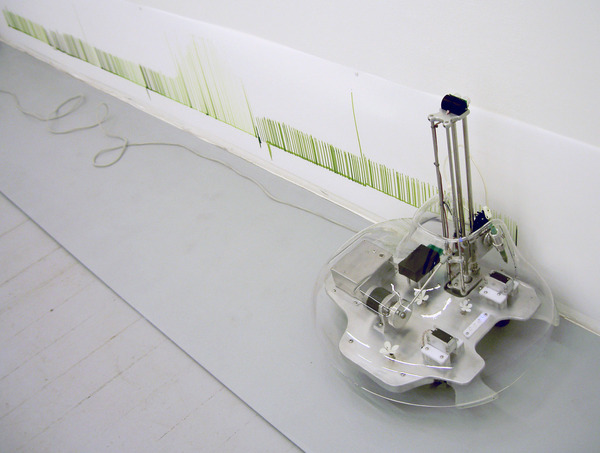 The animation contextualizes Sabrina Raaf’s more poetic Translator II, Grower (2005–2007), installed nearby. Grower is comprised of a robot periodically translating carbon dioxide levels measured in the gallery into brush strokes of ink on backlit film. The more people that are present at any given time, the longer the strokes due to higher carbon dioxide emissions. The resultant image is a long drawing in shades ranging from green to brown that simulates grass growing. Once the length of wall is full––after a couple of weeks––museum staff replace the film with a fresh one and move the completed drawing higher up the wall. By the end of the exhibition, the culminating installation of several drawings created over the course of two-and-a-half months will effectively document the number of museum visitors through carbon dioxide levels.

In addition to video and new media installations, Climate of Uncertainty includes a substantial amount of photography due to its perceived documentary capacity––as discussed by the museum’s associate director and exhibition curator, Laura Fatemi, in the exhibition catalog and an interview on WBEZ’s Worldview in January (interview begins at twenty-minute mark)––especially landscapes featuring human encroachment and impact on the environment. The expected heavy hitters in this category, Edward Burtynsky and Toshio Shibata, have an unexpectedly and refreshingly light presence in the show with only one work each, while local photographers Terry Evans and Daniel Shea occupy much of the first floor with their series documenting melting glaciers in Greenland and the coal industry along the Ohio River, respectively. 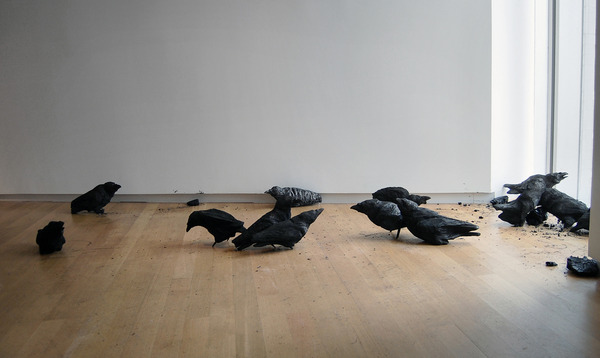 The second floor features several photographs from Chris Jordan’s series Midway: Message from the Gyre (2009–2010), installed as a rectangular grid. Decaying albatross carcasses, indicated by prominent outlines of bones and feathers surrounding bits of colorful plastic, are stark and poignant representations of the impact of pollution in a location as remote as the Midway Atoll, equidistant between North America and Asia. The neighboring installation of nineteen life-size, scorched sculptures by Maskull Lasserre depict a morbid flock of black ravens and crows––superstitiously associated with ill omens and death in Western culture––that appear to peck at their own detritus. Lasserre carved the birds from various types of wood before burning them into charcoal to create his installation aptly named Murder (2011–2012).

Whether art can ameliorate environmental problems let alone tangibly incite change is possibly an unanswerable question. Climate of Uncertainty is a thoughtfully curated attempt to bring together diverse work addressing different aspects of this most pressing issue through documentary, metaphorical, poetic, and experimental approaches. The line between nature and humanity’s impact on it becomes blurry.