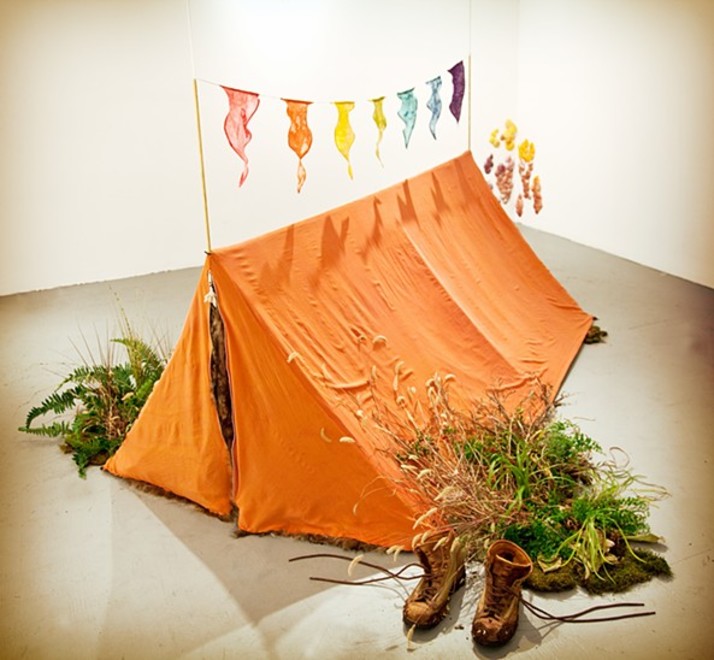 2012 In Review: The Second City Comes in First

Simply put, Chicago won big in 2012. The conglomerate of motley activities comprising the city’s art scene, so artist-driven and local in flavor, is gaining recognition nationwide: experimental curatorial models, innovative arts organizations, often-ephemeral alternative spaces and apartment galleries, its tradition of the interdisciplinary artist/writer/curator, and above all, emphasis on community. Possibly because of the continuation of the seemingly never-ending recession, Chicago’s thriftiness has become quite attractive. While Chelsea suffered heavy losses due to Hurricane Sandy–the galleries that Jerry Saltz so poignantly lamented–the Second City came out in full force onto the national and international stage with its four stars flying high.

Most of the action ramped up toward the end of the year in a race to the Mayan apocalypse (which, if you are reading this, we have all survived). The inaugural EXPO CHICAGO in September and the MDW Fair in November represented polar opposites of what an art fair can be. EXPO deliberately focused on bringing international art and money into Chicago and on reasserting Chicago in the international art market in the wake of NEXT, Art Chicago’s demise, hopefully with the lesson learned to pay attention to local artists and spaces. On the other hand, having completed its second year and third iteration, MDW is full of the same art and young artists you would typically see at any opening in Chicago throughout the year, but multiplied exponentially. MDW’s focus has been more on building community and showcasing local spaces and projects–with the inclusion of a few vendors from outside the city–than on sales. MDW also serves as the awards ceremony for the Propeller Fund, a sizeable award for local artists’ projects that injects much needed capital into the scene. With an optimistic view, these two fairs can complement each other and fill in gaps left by the other. The slew of art fairs continued into December, as Chicago artists and dealers flocked en masse to Miami for Art Basel Miami Beach, SCOPE Miami, NADA, UNTITLED. and more, welcoming an escape from the (albeit mild) Chicago winter for a burst of sand, surf, and sunshine. (I vicariously lived that weekend through phone snaps of palm trees, Thiebaud paintings, and getting stuck in an elevator during the hungover and less-than-glitzy deinstall.) 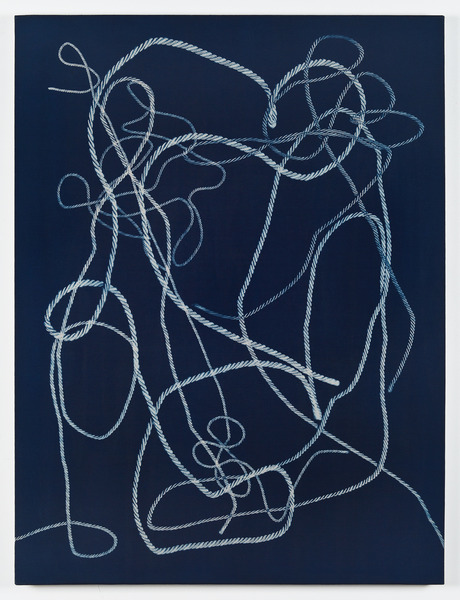 Noteworthy exhibitions of 2012 included two solo shows: John Opera’s People, Places, and Things at Andrew Rafacz Gallery (September 21–October 27) and Jenny Kendler’s The Hall of Disappearing at the Chicago Artists’ Coalition (October 12–November 1). In his fourth solo exhibition at Andrew Rafacz Gallery, Opera continued his contemplation of the indexicality and materiality of photography. In a solo show the previous year, aptly entitled Anthotypes, Opera had reached back to an early photographic process to create abstractions using plant-based dyes he foraged himself. The images appeared to be photograms of ephemeral ink-on-water drawings, but the referent was a couple of steps removed: Opera first recorded the drawings on negatives that he digitally enlarged and then used to create the small anthotype prints. In a direct trajectory from this work, Opera moved on to creating large cyanotypes on stretched linen in a similar process mediating the referent. The resultant images retain a rich materiality and play with the boundary between photography and painting–especially as each print is an edition of only one–well-described in Michelle Grabner’s review in Artforum. 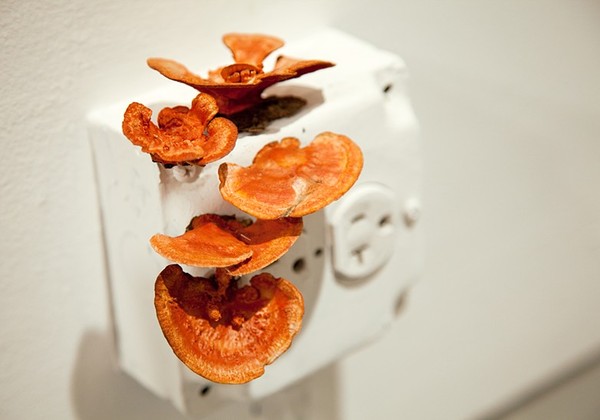 Jenny Kendler, Orange bracket fungus "grows" on an electrical outlet, one of the several tiny installations hidden throughout the show, 2012; Image Courtesy of the Artist.

Jenny Kendler is also an adept forager for materials in nature, some of which she collected while as a visiting artist at ACRE’s summer residency in Wisconsin. Her solo show as a BOLT Resident at the CAC’s relatively new location in the former Flatfile Galleries featured sculptural and installation work that felt like vignettes from a German fairytale, simultaneously magical, mysterious, and playfully dark. Two tent structures took center stage: Theriantropy was internally lined with fur, inviting viewers to unclothe and enter, while Burial Mound was externally lined with fur and sewn shut with a shiny, suggestive opening on top. Flags in various sizes representing rainbow colors were a repeated theme, and objects reminiscent of grandmothers’ knick-knacks, curio cabinets, and science specimens lined the walls of the gallery. Without close observation it would have been easy to miss tiny sculptures adorning such small spaces as an electrical outlet, as Kendler’s work encroached on the gallery like moss on a rock in the most charming way possible.

The biggest coup and story for Chicago this year, however–on the heels of the reelection of President Obama–is the naming of Chicago’s own Michelle Grabner and recent Chicago-to-Philadelphia transplant Anthony Elms as two of three curators of the 2014 Whitney Biennial (the third is Tate Modern film curator, Stuart Comer). Experimenting with a new model of inviting three separate curators who will each be responsible for a floor of the exhibition, the Whitney uncharacteristically reached outside New York City and, with the selection of Grabner, outside professional curators in an attempt to be less insular and more representative of the country at large.

The challenges for Chicago art in 2013 may be similar to those faced by many small businesses when suddenly experiencing great success: how to keep growing and reaching out without overreaching, and how to retain the characteristics and remain true to the spirit that led to such long-deserved recognition in the first place. My hope is that everything so wonderfully Chicago can positively affect New York, Los Angeles, Miami, and beyond without losing its local flavor and idiosyncrasies, to show the nation and world that you can have something spectacular without so much spectacle.