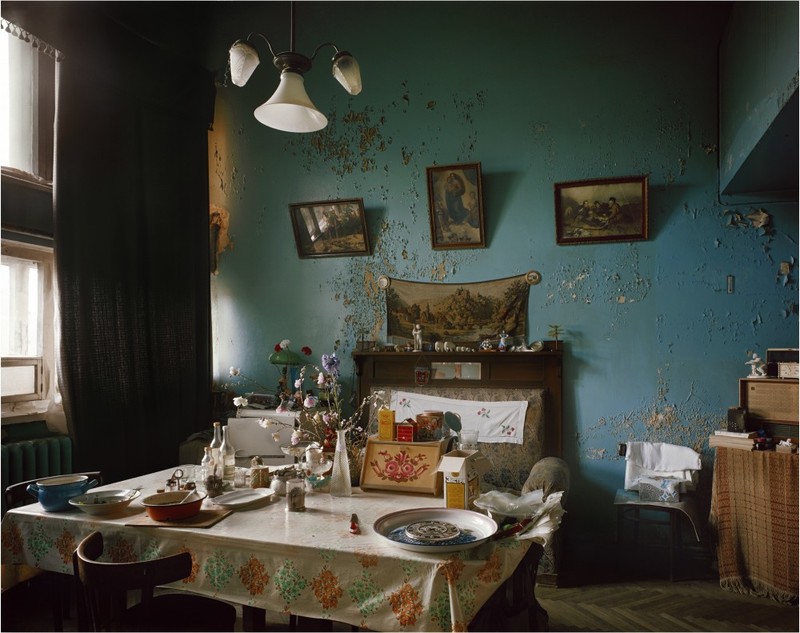 While the third floor of the Prairie-style Madlener House slowly filled for the opening talk of his solo exhibition at the Graham Foundation, Richard Pare screened a video he shot of a Russian industrial bakery in continuous operation since the early 1930s. For almost twenty years now, Pare has extensively documented modernist Soviet architecture built between 1922 and 1932, subsequent to the Russian Revolution of 1917 that overthrew Tsarist autocracy and made way for the establishment of the Soviet Union. While Pare’s video of the bakery’s operations is not included in the exhibition, it provided a rare peek at one of these buildings still in use and a glimpse into the utopian spirit of this period of Soviet modernist architecture: a true marriage of form and function striving for maximum efficiency and manifesting the social goals and technological ideals of a young and still forward-looking state.

The energetic and experimental idealism intrinsic to the design of factories, residences, and communal buildings in this period, intended to literally house and sustain this new society, perfectly contrasts with the current state of the buildings’ dilapidation and threatened demolition. The Lost Vanguard draws over eighty images from the archive of about 15,000 photographs Pare took between 1992 and 2010 in the former Soviet Union – including in Azerbaijan, Ukraine, Georgia, and Russia – a project funded in part by two grants from the Graham Foundation and first exhibited in 2007 at the Museum of Modern Art in New York. Forming the only contemporary, comprehensive record of Soviet architecture from this period, Pare’s documentary project is linked to a preservationist impulse, subscribing to the idea that creating a visual record may serve to generate interest in the architectural importance and threatened existence of the buildings and, thus, save at least some of them. In this respect, Pare’s project is comparable to that of the late photographer Richard Nickel’s in the mid-twentieth century to document and preserve historic Chicago buildings, especially those by Louis Sullivan and the Prairie School. The overarching tenor of both projects is to catalog as much as possible as quickly and thoroughly as possible in a race against the buildings’ impending destruction.

While Pare’s photographs fulfill a documentary and archival function, they are not devoid of subjectivity. His sharply focused compositions display a penchant for abstracting geometric forms, echoing the same visual language as the architecture he captures, yet his images retain a feeling of warmth and even a romanticism for their subjects’ disrepair evinced in his careful attention to light and time of day. His sensibility falls somewhere between Robert Polidori’s images of decaying colonial architecture in Havana and the empty grandeur of Candida Höfer’s architectural interiors, although Pare’s photographs fall short of the Düsseldorf School’s technical bravado. This does not detract from the impressive scale of Pare’s overarching purpose, however, to bring the work of avant-garde Soviet architects and architecture hidden for so long behind the Iron Curtain to the light of international awareness, or at least that of Europe and North America, in an attempt to salvage whatever possible. 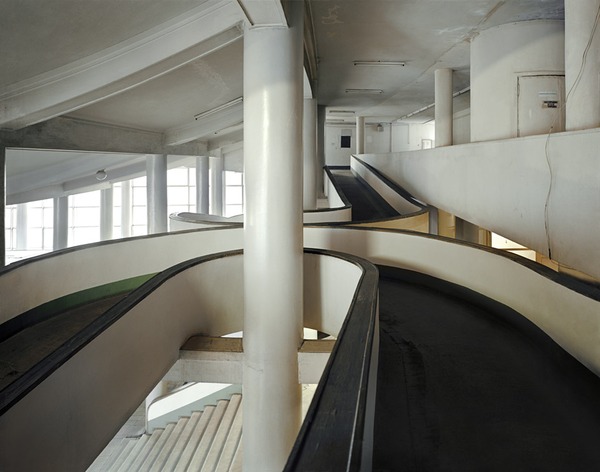 In the conclusion of his talk, Pare showed photographs of later work by one important Soviet architect, Moisei Ginzburg, created after Stalin imposed new restrictions on architecture, by way of contrast with the majority of the architecture depicted in The Lost Vanguard. In Pare’s words, Ginzburg was forced to turn away from modernist experiments to employ a more historicist vocabulary, being “compelled to produce pastiche,” with his work eventually devolving into “classical travesty.” Pare’s correlation of avant-garde design with progressive politics – and, conversely, regressive design with reactionary politics – is convincing in light of his exhaustive practice intersecting architecture and photography, depicting the failed utopia of the Soviet state through the concrete metaphor of the ruination of its earliest and most vanguard architectural structures.

The Graham Foundation is offering free public tours of The Lost Vanguard: Russian Modernist Architecture, 1922-1932 every Saturday at 2PM, and a monograph by The Monacelli Press will be available for purchase in the bookshop throughout the exhibition.